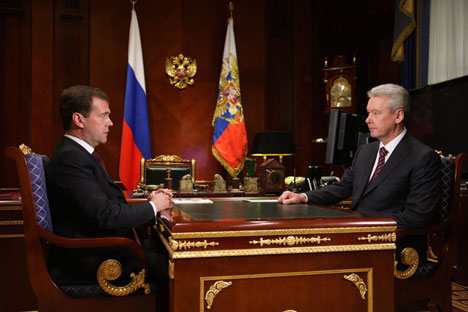 Russian President Dmitry Medvedev has nominated Deputy Prime Minister Sergei Sobyanin to be the mayor of Moscow. If the nomination is approved by the Moscow City Duma, Sobyanin will step down as deputy prime minister and chief of staff to Prime Minister Vladimir Putin.

The nomination announcement was made unexpectedly. Sobyanin and Medvedev were both attending a meeting of the Skolkovo Scientific Advisory Board in Gorki. Following the meeting, reporters were invited for an impromptu press conference with both men, at which the nomination was announced.

“I want to inform you of my decision to nominate you for Moscow Mayor, and the respective proposal will be submitted to the Moscow City Duma,” Medvedev told Sobyanin. “This is a very difficult and important job, and I am sure you will be up to the challenge,” he said. The president pointed to Moscow’s special status as a metropolis and the capital of Russia. The city, he said, had been developing rapidly over the past few years has a lot of strengths to show for it, but also and many problems. Among them, Medvedev cited Moscow’s overpopulation, a host of social issues and transport problems. “Moscow’s new mayor should concentrate on social problems and raising people’s living standards,” Medvedev said.

“This it is what we were expecting to happen,” said Elena Panina, the head of United Russia’s Moscow branch. Panina said she knew Sobyanin from the Khanty-Mansiisk autonomous region, and described him as a professional.

While meeting with Sobyanin, Medvedev stressed that Moscow “should not be a region cut off from rest of the country.” Instead, the city’s administration “should be fully integrated with the federal authorities to preserve its trust and work efficiently. This, however, does not mean that Sobyanin will simultaneously remain on as deputy prime minister. Medvedev’s spokeswoman, Natalya Timakova, confirmed that Sobyanin would step down from his current posts after being inaugurated.

“Holding Moscow mayor and deputy prime minister positions at the same time is not possible from a legal standpoint, since the mayoral position is selected, while deputy prime ministers are appointed,” said Igor Bunin, president of the Center for Political Technologies.

Who is Sergei Sobyanin?

Sergei Semenovich Sobyanin was born June 21, 1958 in the village of Nyaksimvol in the Beryozovsky region of the Khanty-Mansiisk Autonomous Region.

After high school, Sobyanin attended the Kostroma Technological Institute. He graduated in 1980 and went to work as a mechanic in a pipe factory in Chelyabinsk.

In 1984, Sobyanin began a new job as the deputy director of the agricultural committee of the city of Kogalym. He was responsible for managing the collective farm, and the tax inspectorate.

In 1989, he began graduated studies in law at the Ulyanovsk branch of the All-Soviet Correspondence Institute of Law. He received a doctoral degree in Jurisprudence after defending a dissertation on the rights of the autonomous regions that are part of the Russian Federation.

In January 1996, Sobyanin became a member of the Federation Council and the head of a committee on Constitutional Legislation and Judicial Affairs.

On July 12, 2000, he was appointed first deputy presidential envoy of the Urals Federal District.

In 2004, he was named to the leadership of the United Russia party

In November 2005, Sobyanin became the head of the presidential administration of the Russian Federation.

From Jan. 22 to March 7, 2008, he was the chief of staff for Dmitry Medvedev’s presidential campaign.

Approval by the Moscow City Duma
The Moscow City Duma will discuss Sobyanin’s candidacy within 10 days after the President submits it. “We are currently waiting for the document to be submitted. The date for electing the new mayor is expected to be fixed on Monday at the session of the Duma’s Organizing Committee,” said Moscow City Duma Speaker Vladimir Platonov.

There is little doubt that Sobyanin will be approved. Representatives from United Russia’s Moscow branch hailed Medvedev’s choice. “I am happy that a person is coming who looks before he leaps,” Moscow City Duma Deputy Anton Paleyev said. Another member of United Russia’s faction, Mikhail Moskvin-Tarkhanov, who earlier supported Yury Luzhkov and did not expect the Moscow City Duma to approve any outside candidates, seems to have changed his mind, saying: “The Moscow region will finally begin to develop normally now,” with Sobyanin as Mayor.

Andrei Metelsky, leader of United Russia’s faction in the Moscow parliament, believes that the party’s members, who hold 32 out of the Duma’s 35 seats, will certainly support Sobyanin. Andrei Klychkov, who leads the Communist faction – the only opposition in the Moscow parliament – said that the Communists were against the nomination procedure as such, and could therefore vote against it. Klychkov said he could not be certain about support for Sobyanin until after the delegates meet the candidate.

Outlook for the Moscow government
Vyacheslav Timchenko, a Moscow City Duma deputy from the Tyumen region who has known Sobyanin for a long time, describes him as an “effective manager,” who is also “humane” in his management style. Timchenko suggested that Sobyanin could invite officials from the Tyumen and other regions to be part of his Moscow team. Meanwhile, it is not quite clear who makes up Sobyanin’s team.

“He is the man who has always looked for compromises and has never really had his own people. He has not brought anyone to either the Kremlin or the government staff,” said Igor Bunin. Anastasia Rakova, who came from Tyumen with Sobyanin and became deputy chief of staff in the government, seems to be the only exception.

“As mayor, Sobyanin will able to bring people together, which will help him transition into the Moscow administration smoothly. Potentially, Vladimir Resin or Lyudmila Shvetsova could be appointed First Deputy Mayor. There was an idea to separate the posts of the mayor and chairman of the Moscow government, but this idea seems to have been dropped,” Bunin added. Yury Zagrebnoi, head of Mossovet, also expects Shvetsova to retain her position.

“Will Resin retain his position? For all his shortcomings, Resin has one important strength: he is extremely flexible. Over the past two weeks, people have been surprised by his inconsistent decisions. But this is what Resin is about, he has always been like this,” Zagrebnoi said. Resin’s other strong points include his involvement with the city’s construction industry and experience in holding Moscow’s elections, since he headed local electorate headquarters for many years. As for other officials, their fate is less certain.

“Most of Luzhkov’s officials will retain their jobs, while the new mayor will focus on distributing the city budget,” said Stanislav Belkovsky, a political analyst. “Sobyanin will take a number of populist steps: he might revise Moscow’s general development plan, annul several construction projects, etc. It is now important for him as a non-Muscovite to earn popularity.”

Outlook for traffic jams
While meeting with Sobyanin, Medvedev lamented Moscow’s chronic traffic jams. Sobyanin has road construction experience as chairman of the Board of Directors at Rosavtodor. And yet, experts are uncertain about Sobyanin’s plans to solve the transportation problem.

“Sobyanin’s having chaired Rosavtodor is not that relevant. The company itself is just taking shape, and this does not make him an expert on roads,” said Mikhail Blinkin, director of research programs at the Research Institute for Transport and Road Infrastructure. Sobyanin’s other skills are what matter. “He is a brilliant manager, federal and regional official. He is very good at holding meetings, and has a fantastic memory. This is what matters,” said Blinkin.

Business outlook
Experts believe that with Sobyanin as mayor, the federal government will be exercising more influence on Moscow’s businesses. “Among other things, significant changes can be expected in the financial, energy and construction sectors, which could fall under the control of federal agencies,” said Dmitry Abzalov, an economist at the Center for Political Trends. “Moscow’s stakes in the Bank of Moscow and the Moscow Oil Refinery could be sold. Yelena Baturina’s Inteko might face serious problems, since some of her assets could go to, say, Suleiman Kerimov, as part of financial restructuring.”

Sobyanin will lean on his experience in reforming infrastructure, and he also might launch a campaign against semi-legal economic activities, including migrant workers, according to Alexander Razuvayev, chief analyst at Galleon Capital Investment Company. He does not rule out the possibility of a decrease in Moscow real estate prices ahead of the 2011-2012 nationwide election cycle. Sobyanin’s latest statements emphasize the need to reduce the state’s role in the economy, and certain measures could be taken in this respect, according to Yaroslav Lissovolik, chief economist at Deutsche Bank Russia.

For his part, political analyst Stanislav Belkovsky links Sobyanin to the business empires of Roman Abramovich and Gennady Timchenko. Belkovsky said that Sobyanin developed close ties with them during his term as the governor of Tyumen and therefore Abramovich’s business could strengthen its position in Moscow.

Social outlook
Mossovet’s Zagrebnoi is convinced that all social benefits will remain in place. At the same time, he noted that a number of analysts believed some social benefits were being paid from federal sources, and it was unclear whether and how much of these could be retained without Luzhkov.
Galina Khovanskaya, a Moscow State Duma deputy from A Just Russia does not expect the new mayor to begin with revising the benefits system. “I don’t think he will start with it. Even during the economic crisis, the Moscow government and the Moscow City Duma did not increase the burden on low-income families,” she said.

Sobyanin’s property
According to his 2009 earnings certificate, Sobyanin had a modest annual income of 3.2 million rubles ($104,000) and a 118 square-meter apartment, which he owns jointly with his wife Irina. The Sobyanins also have a Jeep Cherokee. They have two daughters: Anna (born in 1986) and Olga (born in 1997).