The Arctic: laboratory for cooperation 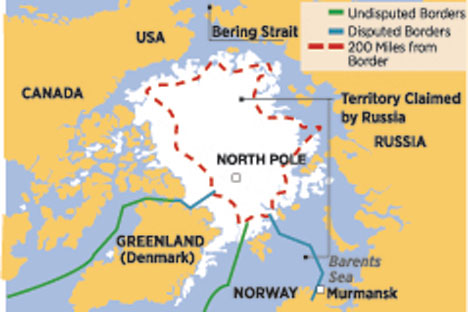 Scientific cooperation, not geopolitical competition, is the key to developing the Arctic, a sanctuary of energy resources.

At Russia's first-ever Arctic conference, stakeholders discussed their futures in the frozen sanctuary of energy reserves and precious metals. Russian Prime Minister Vladimir Putin said that Russia is planning to assert its influence in the area through steady talks, dismissing the possibility of a “battle” over its resources.

“Russia plans to restore and increase its scientific presence in the Arctic and support fundamental research, including research led by international teams of scientists and experts,” Putin told an audience of 400 scientists, businessmen, lawyers and politicians gathered in Moscow for the last day of the two-day conference.

At the Arctic conference—hosted by the Russian Geographical Society, which hopes it will become a regular event politics were treated gently, as social and ecological issues took the foreground. Prince Albert II of Monaco was among the speakers addressing the concerns of native peoples in the region, and Icelandic President Olafur Ragnar Grimsson called the Arctic “a laboratory for international cooperation.”

Putin stressed the need for peaceful resolution of conflicting national interests, based on international law.

“There are no real grounds for the majority of frightening scenarios in the Arctic,” he said, and no “battle for the Arctic.” He added that there was much to cooperate on.

The Russian prime minister also promised that safeguarding the environment would be a “principle position” in industrial expansion in the region and that the government would create new national parks and reserves. “The Russian sector of the Arctic, where 1.5 percent of the Russian population lives, provides about 11 percent of the country’s national product and 22 percent of total Russian exports,” Alexander Bedritsky, President Dmitry Medvedev’s adviser on climate change, said at the conference.

Political issues lurked close to the surface, however. In a run-up to the conference, Russia and Norway settled a 40-year-old dispute over their maritime border on Sept. 15. At a joint news conference with Norwegian Prime Minister Jens Stoltenberg, Medvedev warned that “the Arctic can do without NATO, since it is a zone of economic cooperation.” The region is subject to competing territorial claims by Russia and NATO members Canada and Denmark. Iceland, Norway, Sweden, Finland and the United States also share the area.

The United Nations will settle all competing claims. Russia filed a claim to the territory with the UN in 2001, but it was rejected as scientifically unsupported. Russia is preparing a new claim, which will be ready in 2012 or 2013. Moscow has also earmarked $64 million for research in the next three years to support its claim. Canada will also file a claim by then, and Denmark expects to have its claim ready by 2014.

The United States is not a signatory to the 1982 convention and favors the “internationalization” of Arctic waters.

Scientists are spending a year on the ice investigating the natural resources of the Arctic ocean. Russia is one of five countries who are dividing up what could be billions of dollars worth of oil and gas reserves hidden deep under the ice. RT's Ekaterina Gracheva is with the expedition as it looks for a home among the polar ice flows.