The cost of shoes 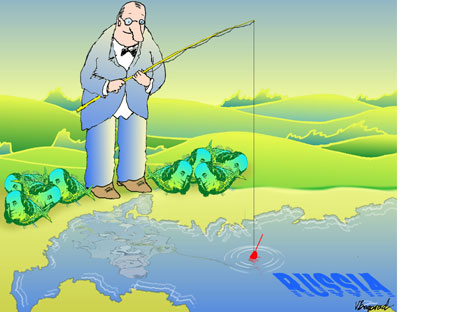 At that point, most Russians still wore shoddy, plastic slip-on shoes that had dominated Soviet foot fashion (or the lack thereof), but Russians moved rapidly up the consumer goods chain. Real shoes were among the very first items imported to Russia, along with the more obvious, such as toilet paper and jeans. Russia was well behind in the technology race and imported container loads of computers as soon as they could.

When the Putin era began in 2000, things really took off, as incomes soared 10-fold. The advent of consumer credit in 2001 meant that Russians could multiply their salaries. They went on a national shopping binge, loading up on the huge plasma TVs and tiny mobile phones they had been lusting after. Car purchases exploded since then and leading car dealership Rolf (a $6 billion company) said sales have already recovered to pre-crisis levels after the lull that started at the end of 2008. As the U.S. mortgage market appears to be screeching to another halt, the volume of mortgages in Russia doubled every month since the summer.

Thanks to the financial crisis, attention has turned to the emerging markets, with China attracting almost all the attention. That’s not without justification; China beats all comers in most comparisons. Russia has the third largest gold and hard currency reserves in the world, with $480 billion of cash in the central bank, but this pales against China’s $2.5 trillion.

However, what really catches business people’s attention is China's population of 1.3 billion (Russia has 142 million people) and GDP growth of 10 percent per year (Russia will put in about 4.5 percent this year). But this broad-brushstroke comparison misses a crucial point: China has the most people, yet how many are big consumers?

Consider some different figures: Russia’s middle class makes up as much as 68 percent of the population, according to Troika Dialog (a high estimate, according to other analysts), whereas China’s constitutes just 13 percent. Russia’s per capita income is around $12,000 per year, whereas China’s is around $4,000. The poverty rate in Russia is 13 percent (or about 18.5 million people), whereas poverty in China is a massive 50 percent (or 600 million people), according to some estimates.

The growth of Russia’s per capita income is well over two or three times faster than its closest rival (Brazil) and streets ahead of China and India. Russia is an industrialized country of well-educated people that is rapidly converging with its Western European peers, whereas China (as well as India and, to a lesser extent, Brazil) is a largely agricultural society marred by massive poverty. The reason China is growing so fast now is that it is still at the very beginning of the catch-up process. Half of the Chinese are still living in poverty, while most Russians are saving for a new apartment.

Of course, China will out-consume Russia in the long-run, as most of those farmers will become phone-using, car-driving, telly-watching city dwellers eventually. Yet, if you want to sell something more expensive, then Russia’s relatively wealthy middle class can match or beat China, especially on big ticket items or sophisticated financial products like credit cards. It will take generations for the Chinese to close this income gap; the average Russian will still be twice as rich as the average Chinese in 2050, according to the World Bank.

While commentators are focused on the macroeconomic numbers coming out of the emerging world, for business it’s the microeconomic numbers that are important. What should really shock is that the Russian consumers are already starting to compete with their counterparts in the West.

The Moscow flagship stores of Sweden’s furniture maker IKEA and French supermarket chain Auchan are already both the highest grossing and most profitable for their parent companies in the world, according to AC Nielsen. Looking at the other end of the scale: those living on, or under, the poverty line in Russia fell to 13.7 percent as of March 31, down from 17 percent in 2009, according to the Federal State Statistics Service, and is still falling; the poverty rate in America in 2009 was 14.3 percent and rising.