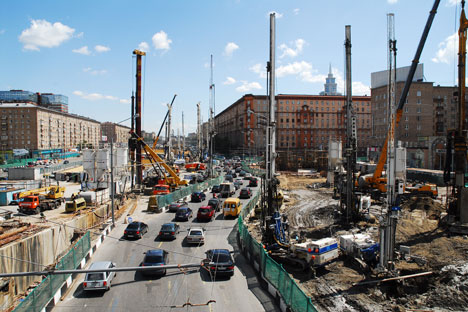 An imposing post-Soviet bureaucracy and chaotic development underground has led to the most expensive roads.

How much does it cost to build a road in Russia? Six times as much as it does in the United States.

Russian news agency Ria Novosti recently ran a comparison of how much it costs to build a road in Moscow, Russia, the European Union, the United States and China. The differences are pretty stark.

China has the cheapest cost, at about $1.3 million per mile, with the United States and the European Union coming in about the same at between $3.6 million and $4.2 million respectively. However, the Russian costs of road building are among the highest in Europe, with each mile of road costing $10.5 million.

That price is dwarfed by the massive $31 million it costs to build roads in the region of Moscow, according to an official at the Russian Transport Ministry.

Despite this, Prime Minister Vladimir Putin told delegates at a United Russia party congress in the middle of September that the state intends to build 14,000 kilometers (8,400 miles) of road over the next five years, and that all federally controlled roads would be repaired and upgraded to modern standards by 2020.

So why is road building in Russia so expensive?

The short answer is that Russia’s infrastructure is still affected by the legacy of the Soviet Union. While construction companies in the West are given a clean piece of land and simply have to put down gravel and asphalt to make a road, Russian companies have to deal with a whole host of extras, including the bureaucratic nightmare these extras involve especially in Moscow.

“Much of the cost issue reflects the historic approach used from Soviet times,” said Maxim Bakshinsky, deputy general director for Mostotrest, a Russian infrastructure builder based in Moscow. “In the West, they calculate the cost on the materials and labor that actually go into constructing the road, but in Russia the cost includes buying the land and rebuilding any infrastructure or utilities that are on that land.”

The clients who want a new road built in Moscow this is usually the city government hire a contractor not only to do the actual building but pay them to sort this mess out, Bakshinsky said.

“The contract value includes costs of land, buildings, courts, utilities, infrastructure,” Bakshinsky noted. “All this involves huge costs, especially in the center of Moscow where the land value is so high. You must deal with dozens of owners, buildings, and sewage, gas and telephone lines ... Those who don’t understand the industry specifics have complained that you could buy a Hadron collider for the same price [as a Moscow road]!”

Then there is the job of clearing off everything that is standing on the land. By law, any infrastructure or utility objects have to be removed and rebuilt elsewhere (including buying more land to put it on), which is included in the price.

But maybe the most complicated problem is dealing with what is under the land. Much of the city's growth has not been planned, and buildings and their supporting infrastructure have been added piecemeal as money became available. The city is a tangle of pipes, power lines and telephone lines—all of which may have different ownership.

The land itself could be privately owned; the sewage pipes belong to the municipal government; and if you are unlucky then there might be a federally owned telephone line (like those connecting the Kremlin to the other government buildings), in which case the contractor has to apply to the Federal Security Service for permission to move the lines.

The contractor's job is to wade through this morass, and the faster it can get the work done the more the company earns. Road costs are not all that high, said Bakshinsky; but the process of preparing the place for the road to be built is worthy of Kafka.