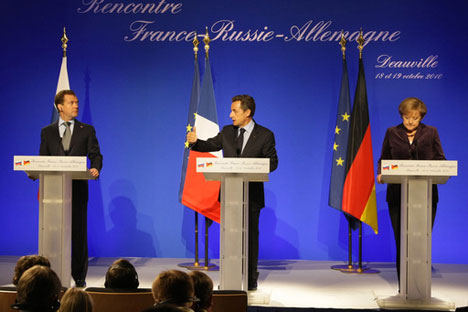 For most of the last decade, Western European politicians have been staring down their wrinkled noses at Russia, complaining about its poor record on democracy, human rights and corporate governance. But over the last year, French and German politicians have beaten a path to the country to make sure they get a piece of what is soon to become the largest consumer market on the continent and one of the few that is sure to grow over the coming years.

Europe has done an abrupt about-face in its attitude to Russia, and a Berlin-Paris-Moscow triangle has appeared in European politics. The change is remarkable. Russian President Dmitry Medvedev has been talking non-stop about improving Russia’s investment climate and glad-handing with European leaders to rebuild relations. Only three years ago, then-President Vladimir Putin gave a fiery speech in Munich as relations decayed to levels of animosity not seen since the Cold War that amounted to an ultimatum: stop criticizing Russian internal affairs or the Kremlin will look for new friends.

The economic crisis has changed everything. Rich countries could afford high-minded ideals before the financial firestorm swept the globe in Fall 2008, but now faced with impossible debt loads and crushing deficits, the key goal is to get economies moving – and Russia is one of the few places in Europe where companies can make any money.

Germany was the exception to this EU conceit. Former chancellor Gerhard Schroeder spent most of the last decade wooing Russia. As a result, Schroeder won a nice job for himself – he now works for Russian state-owned gas giant Gazprom as head of the Nord Stream gas pipeline project. But this project should also prove a boon for his country, as the pipeline terminates on the German Baltic coast, making Berlin a lynchpin in European energy politics.

When Angela Merkel took over as chancellor in 2005, she pointedly gave Moscow the cold shoulder, choosing to visit Poland on her first foreign visit. More recently, relations have improved, as the chancellor follows Germany's leading companies to this increasingly important European market. The rest of the German elite have taken her lead. "In Germany, we have an old saying that goes like this: 'When Russia seems strong, it is not as strong as it seems. When Russia seems weak, it is not as weak as it seems'," wrote Wolfgang Clement, a former German economy minister, in an op-ed in The Moscow Times in October. "The relations between Germany, the European Union and Russia can be summed up in five words: We depend on one another."

German President Christian Wulff was in Moscow for a state visit in the middle of October, complete with military honors and gala dinners, and gushed about the growing ties between the two countries. "About 6,500 German companies are working in Russia, and many of them plan to enlarge their business,” Wulff said in one of his many speeches.

The Kremlin, on a modernization drive that needs foreign investors, returned the compliment. "We have a large amount of cumulative German investments in the Russian economy. This is almost $23 billion. The growth in the first half-year equalled nearly $6 billion," said Prime Minister Vladimir Putin at his meeting with the German president. That means Germany already accounts for just over a sixth of all Russian investment on its own.

France has been slower to follow, but over the last year, it has been impossible to attend any high-level investment conference without running into the impressive French finance minister, Christine Lagarde, who was in Moscow again in October for VTB’s second investment summit, her third visit this year. Speaking on the eve of the IMF annual meeting and just ahead of the start of France’s chairmanship of the G7, she came bearing gifts. "There is a new monetary policy in the world. It is not unilateral, not bilateral, but multilateral—we need to be multilateral in all areas," said Lagarde at the event, echoing Russia’s decade-old position that was widely ignored while the United States was still the only superpower in the world. Lagarde crowed in the same speech that French investment into the Russia economy has just overtaken that of the U.S.

If there were any doubts over France and Germany’s commitment to pleasing the Kremlin, then the Deauville summit between Medvedev, Merkel and French President Nicolas Sarkozy in the third week of October should have put them to rest.

The German and French leaders promised to nix visa restrictions on Russian travelers to their respective countries (although not anytime soon). The Kremlin has aggressively been pushing for the end of visa restrictions, as it is the top item on the population’s wish list for Russia’s foreign policy – and both Russian leaders face elections over the next two years.

Sarkozy's office spilled the beans during the Deauville talks saying, "Russia wants the EU to relax visa requirements, while EU nations want clearer access to Russian gas and its economy." Merkel said the same thing, calling for an acceleration of a treaty with Russia that could address plans to abolish visas between Russia and the EU, even at a time when both Germany and France have taken a radical lurch to the right and clamped down hard on immigration.