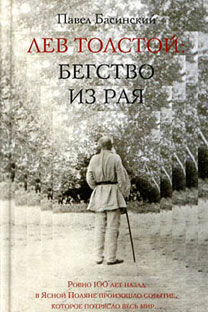 It’s been one hundred years since an 82-year-old man left his Yasnaya Polyana estate in a Russian village early in the morning, hiding from his wife. He never returned. A hundred years later, it is even more difficult to separate the truth from myths surrounding Leo Tolstoy’s departure and death, which followed ten days later. But writer and journalist Pavel Basinsky attempts precisely this in The Flight from Paradise, published in Moscow this year.

Basinsky follows Tolstoy’s path from a “trifling baby”, as he was called fondly by his brothers, to an honoured army officer, landlord and the head of a large family, who gained fame as a writer, and finally, as a teacher of humankind.

Tolstoy believed that people are born to be happy. He, too, was aspiring for happiness, a paradise, not for himself, but for as many people as possible. This was the idea that guided him throughout his life, beginning with the symbolic “green stick”, which he and his brother Nicolas buried not far from their family home at Yasnaya Polyana, a magic stick that would make all people happy. As he grew older, he found happiness to be as elusive as ever.

The book analyses not just Tolstoy’s departure, but also this paradise that animated his wonderful, successful, yet not quite happy life. It was not just because of the premature death of his parents, his beloved brothers and children, including his favourite son, Vanechka. The main obstacle to happiness was misunderstanding, even among people closest to him. The book reveals Tolstoy’s lifelong wrestling with his inner daemons, his painful efforts to gain the ability not just to teach, but to live upto his convictions, live fairly and well, and to correct his ways, again and again.

Tolstoy’s “flight from paradise” may have followed many years of hesitation and speculation, but in the end it was an unplanned and spontaneous act. The lifelong quester returned to Yasnaya Polyana, but only after death. He was buried where more than seventy years before he and his brother had buried the “green stick” bringing happiness to people.