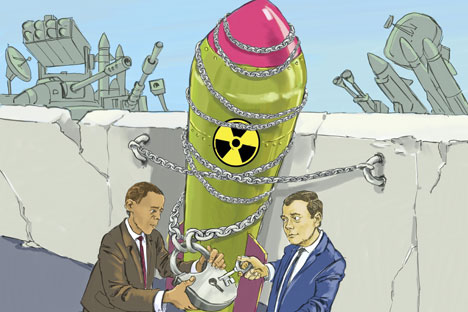 The year 2010 has seen important events in the sphere of nuclear disarmament and non-proliferation, with positive impact on global security. The presidents of Russia and the US have signed a new Strategic Arms Reduction Treaty in Prague. If ratified by national parliaments, it will make strategic ties between the two nuclear powers more stable, transparent and predictable. A summit on nuclear security in Washington has passed resolutions to enhance the safety of nuclear materials worldwide. The 2010 Review Conference of the Parties to the Treaty on the Non-Proliferation of Nuclear Weapons (NPT) concluded with the signing of the final document on strengthening the treaty.

Useful as these steps are, they have not touched upon the strategic nuclear ideology of mutual deterrence. It is the paradox of nuclear deterrence that largely addresses the threats of the last century, while in the new global and multi-polar world, any major armed conflicts between great powers and their allies are highly unlikely.

At the same time, nuclear deterrence is not effective against the new threats of the 21st century, including the proliferation of weapons of mass destruction and delivery systems, global terrorism, ethnic and religious conflicts, and cross-border crime. Nuclear deterrence in some cases can provoke proliferation of weapons of mass destruction.

To prevent the negative impact of nuclear deterrence on cooperation among global players, it is necessary to decrease arms levels through pacts based on the principle of minimum sufficiency, and also promote strategic stability to ensure equal security for all and exclude the possibility of the first nuclear attack or rocket launch due to technical error or erroneous interpretation of the other party’s intentions or a lack of time for decision-making by the political leadership. The new START meets all these requirements, but much remains to be done.

The next stage of nuclear disarmament cannot be exclusively bilateral. It will require restrictions and confidence measures towards other nuclear countries. Unlike the US, Russia’s geostrategic position makes it accessible to all nuclear countries, which has to be taken into account for deep disarmament.

The concept of nuclear deterrence has become an insurmountable obstacle on the path to global nuclear disarmament. It is no secret that there are not just supporters, but also opponents of nuclear disarmament in the US, Russia and other countries. Some are still guided by Cold War stereotypes, but many voice specific and justified concerns related to the process of disarmament. Their arguments cannot be simply ignored. For example, there is a widespread belief in Russia that the country’s nuclear potential is a key element of Russia’s great power status.

We are convinced that Russia’s foreign image will be largely ensured by its economic modernisation, rising living standards, social and political rights and freedom and development of science and culture. However, as long as the threat of “power projection” is used in international relations, Russia will have to retain sufficient military, including nuclear, potential to protect itself, its allies and its lawful interests.

Thus, nuclear disarmament requires greater confidence among nations, along with greater international security and stability. The Obama administration has revised its global security agenda, shifting to a new, multilateral approach with focus on strengthening global security regulations and institutions, the use of diplomacy in dispute settlement, and equal partnership with Russia. It is important that these principles are reflected in the foreign policy of the US and its allies.

This applies to anti-ballistic missile defence, conventional weapons and strategic non-nuclear weapons, as well as space militarisation plans. Taking a long-term perspective, we came to the conclusion that the world without nuclear weapons is not our existing world minus nuclear weapons. We need an international system based on other principles and institutions. A nuclear-free world shall not become a world free of wars using other weapons of mass destruction, conventional arms, advanced non-nuclear weapons and systems based on new physical principles. It is not just about major wars, but about local conflicts as well. Today, small countries view nuclear weapons as a means to offset the huge advantage of great powers in terms of conventional weapons. It is this idea that provokes nuclear proliferation at the regional level, triggering the threat of nuclear terrorism. To eliminate such threats, it is necessary to build reliable mechanism for peaceful settlement of major and local international and border conflicts.

Nuclear disarmament necessitates a thorough overhaul of the entire international system. This will also help solve other key problems of the 21st century related to global economy and finance, energy supplies, environment, climate, demography, epidemics, cross-border crime and religious and ethnic extremism. Nuclear disarmament is, therefore, not a goal in itself but rather an important area, precondition and method for reorganising international life on more civilised principles and according to the demands of the new century.

Mikhail Moiseyev is former Chief of the General Staff.