'Competition is now among brands and not tea-producing regions' 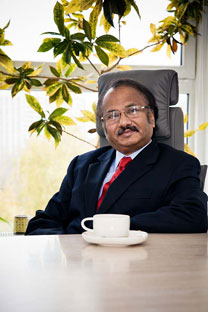 The tea deficit could reach 100,000 tonnes by 2011 after last year’s poor harvest in India and China, news agencies reported. Yet, Indian tea production company J.V.Gokal hopes to expand operations in Russia, one of the main exporters of Indian tea. The Indian producer is preparing to launch new brands in order to augment its share on the Russian tea market. Radhakrishnan Baskaran, Director of CIS Operations J.V.Gokal, sat down to talk about the situation on the Russian tea market and the history of his company in Russia.

Indian tea is a part of Russian history. There was a time when the USSR imported only Indian tea. Your company must remember those times, since you have been selling tea to Russia since the Soviet era. What was it like?

Radhakrishnan Baskaran: We began making shipments to the Soviet Union in the late 1950s. Our first deliveries were in 1958, and we have been cooperating regularly since the 1960s. In those days, as you know, all trade was centralised, and our first partners were state exporters Vneshposyltorg and Soyuzplodoimport. Before the 1990s came around, the only clients we worked with were government entities, and we were among the leading importers of Indian tea at that. We accounted for 30-32% of Russia’s tea imports throughout the 1980s. At that time, all of the Soviet Union’s tea plants were supplied with loose leaf tea. It was only in the early 1980s that we began to sell packaged tea in tin gift boxes, which I still come across today.

What happened after the collapse of the Soviet Union? How did you manage to stay on the market?

Radhakrishnan Baskaran: State orders came to a halt after the Soviet Union collapsed. Like other suppliers, we switched to packaged tea, selling tea under our own brands, but sales were shaky. After 1998, however, we found a Russian partner and signed an agreement for a joint venture. Currently, we have one Russian client, Avalon. We co-own our brands, including Zolotaya Chasha, not to mention a state-of-the-art production line in Serpukhov (80 km from Moscow). Furthermore, we jointly develop our distribution plans. We at the moment occupy about 4% of the market.

How much did you invest in the construction of a tea weighing station?

Radhakrishnan Baskaran: Together with our Russian partner, we split an investment of almost $30 million on a 50/50 basis; there is nothing to hide here. We purchased the latest equipment, giving us the most advanced production means not just for Russia, but for the whole of Europe. As far as I know – although I could be mistaken – this is India’s biggest investment in the Russian food industry.

Relying on your industrial facilities, you also provide industrial support to other brands. Could you please name them?

Radhakrishnan Baskaran: From the beginning, we focused on packaging, planning to use 60% of our facilities to package our tea and leaving the other 30-40% for other brands. The work is divided up between some companies that produce tea, some that export it, and some that sell it. Not all companies have their own factories, which falls in line with the current global trend. Today, we have one the best tea plant in Russia with all the necessary certificates. We package tea for Unilever, and we also package all the loose Lipton, Brook Bond and Beseda teas sold in Russia. We package Milford and Pickwick, too. These are so-called private labels, which account for about 40% of European brands. These companies do not grow tea, they just label and sell it, a trend that can be seen in Russia as well: Auchan, Perekrestok and Seventh Continent (all retail chains operating in Russia, with Auchan being French owned, while Perekrestok and Seventh Continent belong to Russia’s X5 Retail Group – author’s note). They all have their own brands. We do the packaging for some of them. There is nothing to hide here, because everything is in compliance with Russian law, we specify the place of origin on the packages. We do not think that by doing so we are helping our competitors. We compete with them at other levels, including in marketing, promotion, advertising, and sales.

Speaking of sales competition, whom do you see as more dangerous rivals: large transnational holdings or companies from China and Sri Lanka?

Radhakrishnan Baskaran: The thing is that competition in the tea market today is among brands, not among producing regions. Tea is like wine: blending is everything. In the right sense, blending is about what should be mixed with what. Many brands mix many kinds of tea, including from India, Sri Lanka and other areas. Competition exists among brands. If you ask me whom we see as our rivals, I will tell you that, first, our tea is in the economy plus segment. Companies operating in the same segment, such as Beseda (brand owned by Unilever), Princess Nuri, Princess Ghita (both brands belonging to Russia’s Orimi Trade), Lisma (both brands owned by Russia’s May Company), are our competitors.

How is demand distributed among segments in Russia?

Radhakrishnan Baskaran: Following 2000, when there was an economic boom here, people began to switch from the economy segment to the premium segment. Only in the past two years has there been a slight pullback. You know, declining luxury sales are a global trend, while average sales have been on the rise, including in the economy segment. Looking at the tea market, I can say that the overall situation has stabilised, and the premium segment is beginning to recoup its losses.

What kinds of tea are rising the fastest in demand? Which ones are falling?

Radhakrishnan Baskaran: You will be surprised, and I myself was surprised, to see that, according to the latest opinion polls, packaged tea makes up almost 55-60% of domestic sales. This is a huge figure! This is in terms of volume, while it is even more by value: 65%.

Is it any different in India?

Radhakrishnan Baskaran: The same trend has also been observed in India over the past year or two, but loose leaf tea has always been the public’s favorite option in India.

How much of imported Indian tea is loose leaf, and how much is packaged?

Radhakrishnan Baskaran: 95% or more of India’s imported tea is loose leaf, since there is a big difference in customs duties on loose leaf and packaged tea. While a zero duty is paid on loose tea, package tea from India – if the supplier has a certificate of origin – is subject to a 15% duty. Plus a VAT of 18%; you can calculate how much it makes. As a result, very little loose leaf tea is imported. Up until the 1990s, imports from India were between 100,000 and 120,000 tonnes a year. This figure has now dropped to 35,000 tonnes. In fact, Indian tea has almost disappeared from the market, giving way to deliveries from Sri Lanka.

Do you think there are opportunities in Russia for increasing overall tea sales, in other words, will Russians drink more tea?

Radhakrishnan Baskaran: I don’t think so. We estimate Russia’s tea market at 160,000-170,000 tonnes a year. It has been like this since the Soviet times, and will not grow much. Interestingly enough, coffee sales have been rising much faster than tea sales, but tea retains its position. Demand will be shifting from segment to segment, rising for bagged, scented and herbal teas etc.

Are these changes going to cause any sort of shift in your promotion strategy? For example, launching new brands or advertising to boost your sales share?

Radhakrishnan Baskaran: We know very well that we are operating in the economy segment, and we have no ambitions for the medium and premium segments. We are considering different scenarios now. We will probably do something of the sort in the next year.

How will tea prices change next year? What factors will affect prices?

Radhakrishnan Baskaran: This is a difficult question. Tea is a specific product that only grows in very few countries, and I don’t know whether this is for better or worse. You can count these countries off on your fingers: India, Sri Lanka, Kenya, Indonesia, Vietnam, China and some other; nowhere else. Growing tea also depends on climatic conditions: what slope it grows on, at what height above sea level it sits, etc. India itself is one of the world’s biggest tea consumers. With a population of over a billion people, India consumes 750,000 tonnes of tea a year out of the 900,000 tonnes it produces. Domestic consumption is growing, perhaps reflecting our demographic growth. Tea is very important for us; it is part of our culture. Last year all tea producing countries, including Kenya, Sri Lanka and India, were badly hit by droughts. Harvests were low, which is why prices are now rising. Despite all that, however, a cup of average tea is still cheaper for the end consumer than a bottle of mineral water. Higher tea prices are unlikely to hit consumers’ wallets hard. Unfortunately, tea producers have so far been unable to bring this idea home to them. I am not justifying an increase in tea prices, but you should know that in all countries except China tea is sold at auction. This is the fairest way, since it prevents producers from charging too much.

Radhakrishnan Baskaran graduated from the People’s Friendship University of Russia and remained in Russia. He has been living in Russia for 37 years and has two sons who both graduated from Lomonosov Moscow State University and live in Britain.

J.V.Gokal is a large Indian holding; apart from its tea business, it also has assets in aviation, high technologis, textiles. Its tea division is one of India’s biggest exporters, with annual export revenues of over $13 million. The company’s chief markets include Russia and Kazakhstan. J.V.Gokal accounts for some 35% of the Kazakh market, against a mere 4% in Russia.