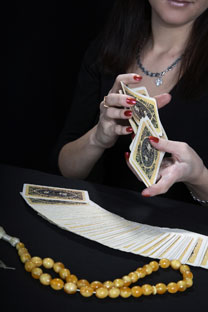 There once was this girl, let’s call her Anna, who wanted to marry a rich man. And, seeing as how the financial crisis continues to roll on, who could blame her? She did indeed find the right man; let’s call him Vasya. She liked everything about him: his three-story country house, expensive car and the small but profitable bank that he headed. But there was one problem: Vasya had no intention of getting married.

He was all for living together and showered her with expensive gifts, but did not want to get married. The poor girl bent over backwards to get her way, whether it was through taking cooking classes and mastering Thai massage. Alas, her efforts were all in vain: Vasya promised that he would love her forever, but marriage never entered the picture. “There’s this one witch you should go see; she is said to have helped many women with the same problem,” a friend suggested. Full of hope, Anna took the witch’s address down and dashed off to see her. “A thousand dollars and he will snatch you up and whisk you over to the wedding chapel,” the self-described fifth-generation witch assured her. Anna was somewhat put off by the high price, but she decided that what she was gunning for was worth the price. After all, if she married a banker, she wouldn’t just get a whole bag of money, but an entire bank.

A month passed, but Vasya still did not want to get married. “Well, we’ve got a difficult case on our hands, so I will have to pay extra special attention to it. It’s going to cost you $5,000,” the witch said. Anna became discombobulated, but it was too late to turn back. She pawned the jewelery that Vasya had given her. Things, alas, did not get any better; they even took a turn for the worse: Vasya disappeared. She called the bank and got some fishy replies saying that he was on a business trip. “I have never had this kind of problem before,” the witch confessed. “I will have to appeal to higher powers. It will cost you $20,000.” Shocked, Anna said honestly that she did not have the money. “Take out a loan on your apartment,” the witch suggested.

Anna was close to mortgaging her flat, but then Vasya reappeared – with a girl he planned to marry the following week. In tears, Anna ran to the witch, demanding that she get her runaway fiancé back or a refund. “What are you talking about?” said the people at the witch’s office, “We have never seen you before.” Having no recourse there, Anna took her case to the police, but they could not help her either. She did not have an agreement to back up her claim, no payment receipt, and she gave her money up voluntarily. “You’re lucky you didn’t lose your flat,” the police told her.

Anna was left to console herself knowing that she’s not the only one. In Moscow alone, 300,000 people were duped by all sorts of “fifth-generation” swindlers last year, according to the Interior Ministry. And that doesn’t include the many fraud victims who did not go to the police for help, knowing that it was of no use.

Professions like that of a magician, healer, witch, and fortune teller are among the most popular and lucrative in Russia. Opinion polls show that one in every five Russians has resorted to witchcraft services at least once in their life. This market is estimated to be worth, at the very least, $2 billion a year. A friend of mine who works as a psychotherapist told me about a colleague who changed professions and became a psychic a couple of years ago. Now he promises to “bring your cheating husband back home” and “restore the love that you once had” – with magic, of course, though in reality he offers the same solutions psychologists do. There is, however, one big difference: Before becoming a psychic, he had just two or three clients a month, but now he has people lining up to see him. His income has gone through the roof.

Are you depressed? Did your husband leave you? Did you get fired from your job? Have you been diagnosed with a terrible illness? Don’t fear, just open up any tabloid and look up the ads section. You will then find that there is no problem that cannot be solved. “Distinguished, first-class master, one of the country’s five top magicians, awarded the 1st degree order (it is not specified what kind, but that does not matter) will return your loved one, cure your alcohol addiction, help with your business and career, etc.” Or take this other example: “the magician brothers will solve all your problems with sophisticated means of punishments, all the way up to…” What follows are a few abstract, but very meaningful, periods. Perhaps, this means killing someone. It is that simple: you pay the magician brothers, and one fine day a brick falls on the head of the person who was giving you trouble, all the while you get off scot-free. What is strange about all this is that despite such a high number of magicians per capita, there are still boatloads of people who still have no luck with love and money.

Soon enough, however, all this malarkey will come to an end, at least in the print media. The State Duma has passed amendments banning the advertisement of cabalistic services in the print press. Will this protect citizens from today’s self-made Merlins? Not likely. After all, there is still the Internet, where anyone can write absolutely whatever he pleases without having to worry about the government peering over his shoulder. And besides, you can find miracles just about wherever you may look.

A list was recently published of places of interest in Russia that bring luck and cure diseases at no cost whatsoever. At one place, a stone weighing half a ton was lifted from the bottom of a river and placed outside a local museum. Soon a rumor spread about the stone having the power to heal sexual dysfunction. Now, men seek out the rock’s healing magic, and they say it helps. A similar case was described in Rostov-on-Don, where a statue of a pregnant woman in front of a local maternity hospital was considered to be endowed with healing powers. Women suffering from infertility are told to touch the statue, which will then guarantee them that a baby is on the way. Indeed, Russians’ belief in miracles knows no boundaries.

But are we the only ones? The huge success of anything and everything about Harry Potter would not make you think so. It is not news that adults are among the series’ biggest fans. What’s more, the life story of Harry Potter’s author, J.K. Rowling, is much in itself like a fairytale: A single mother scrapes together a living teaching French, writes a book for kids that becomes a sensation and gets recognized as the best children’s book in the UK. Seven years later, she becomes the country’s richest woman, with some 250 million books sold. What other children’s authors could brag of having such huge, instant success? Well, think what you may, but I am sure that witchcraft was involved somehow. Apparently, Ms. Rowling possesses some magic recipe for success, but she will not tell anyone. No worries, we can get by without it: If she did it, we can, too. Even if the chances are one in a million, miracles can happen.