The Moscow I remember 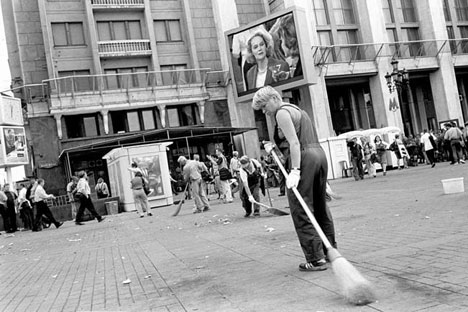 It was minus 30 degrees Celsius and late at night when a five-storey, abandoned building caught fire on Potapovskiy Pereulok last winter. This is the street where I live. When we asked about the victims’ whereabouts, a TV crew cameraman shooting video of fire-fighters waved in an uncertain direction: “Look around the corner, there were some illegal Tajiks crying somewhere.” About 100 fire victims turned out to be the dvorniki, or street cleaners, of our neighborhood. They were illegal immigrants from Central Asia. They had been squatting in the abandoned building. Every morning, we heard them sweep autumn leaves into big puffy yellow heaps, or scratch ice and snow off the sidewalks below our windows.

“He cleaned up Moscow,” everybody said about the former mayor, Yuri Luzhkov. Indeed, it was one of his main achievements. Moscow’s streets are not trimmed with garbage; no rat populations infest the subway. But on the night when the cleaners lost all their modest belongings along with the roof over their heads, the inhabitants of our prestigious Clear Ponds neighborhood, flooded with luxurious restaurants and the most expensive cars in the world, remained indifferent to the illegals. The fire victims stood shivering on the street. They were on their own.

Moscow’s construction boom, sponsored by the endless stream of the country’s oil cash, gave birth to the insatiable demand for cheap labor. Corruption and patronage, what President Medvedev has described as “legal nihilism”, flourished in Moscow’s jungle under Luzhkov.

“Somebody has to deal now with the heritage Luzhkov left on our hands: The shadow economy, kickbacks being paid for every permit, every license,” said Yelena Panfilova, the director of Moscow’s Transparency International. “The kickback pricelist has increased from 40 percent four years ago to 60 percent of every deal with city authorities this year.”

According to a Transparency International report, 75 percent of Moscow’s small and medium-sized businesses have had to fend off illegal ownership raids by well-connected predators. “You can never be sure today that your business will not fall victim to a hostile take-over, and you will be shut out for good tomorrow,” said Alexander Dobrovinsky, a lawyer for Vledimir Nekrasov, the former general director of Arbat Prestige, once the largest cosmetic chain, said. There are no more Arbat Prestige shops in Moscow; they were closed in police raids.

In Moscow, bad taste followed corruption. Despite the loud protests of conservationists, Moscow’s most precious cultural monuments and architectural landscape disappeared. Those who understood that Moscow’s cultural heritage layer was vulnerable were powerless to influence the personal taste and business interests of the city authorities. While visiting Venice, Luzhkov’s deputy mayor famously said the city was too old and impractical and he would tear the whole place down.

As a result of what critics call “architectural vandalism,” Moscow lost from 200 to 500 historically and culturally valuable buildings every year Luzkhov was in power. Marina Khrustaleva from the Moscow Architecture Preservation Society, or MAPS, said a few hundred of the destroyed buildings were officially protected state property.

“You would come out of the metro one day and not recognize the street you’d known since your childhood,” she said. “Some plastic, ugly business centers, tasteless towers, garages or fences wrapped in advertisements grew where you once saw a favorite old mansion, or a quiet courtyard with a unique Roman fountain.”

Last year, MAPS and other groups, Moskva, kotoroi net (Moscow, no longer), Protiv Loma (Against Demolition) and Archnadzor (Architecture Watch), united to preserve what remained of historic Moscow. But, under Luzhkov, the buildings kept coming down.

With all the criticism of Luzhkov, it is easy to forget that Moscovites gave him 74.8 per cent of their votes in 2003, the latest of three times in a row he was elected mayor of the city. For a long time, he was genuinely supported by the capital’s citizens. Igor Bunin, director of the Center of Political Technologies, called Luzhkov “a passionate and never compromising politician.” He was always ready for a competitive fight with the Russian communists, or Yeltsin or, in the last case, with President Medvedev. This time, Luzhkov said he could not appeal to the people, who had supported him in the past, as the position is now nominated by the president and approved by the local parliament.

Public employees and pensioners loved the former mayor, Bunin said, for the so-called “Luzhkov bonus” that he topped out their salaries with, adding funds from the city budget to federal budget employees. Young mothers received free baby food they could obtain at special stores. “Back in the 1990’s, he made a decision to make the city of Moscow a Russian bank and business capital, and concentrated almost 1/3 of all Russian money here,” Bunin said. “He never forgot to feed Moskovites, to support his voters with social bonuses, or give retirees free metro rides.”

To be sure, all this money wasn’t all bad. Independent and modern theaters enjoyed new stages in the city center. Artists and photography galleries moved into old red brick factories. Gazgolder, Vinzavod and Strelka, or Moscow’s Soho, grew popular for hanging out, parties and art events. Moscow’s coffee shops, restaurants and nightclubs keep the night alive.

As the city tried on its new glamorous outfit, Tajiks, Uzbeks and Kyrgyz swept its streets and worked on massive construction. Three million immigrants, almost one third of the capital’s population, lived in the city illegally; they slept in crowded shipping containers, squats, sheds and basements.

“This city lacks mercy for people living in inhuman conditions,” Svetlana Gannushkina, the chair of Citizen’s Assistance, a private group that advocates for immigrant rights. Luzhkov resisted all attempts to legalize undocumented workers. “It is necessary for us to save working places for Muscovites, as they have already been cutting staff around enterprises," said Luzhkov. More ominously, the city authorities and police often seemed indifferent to the rise in hate crimes. According to Sova, an advocacy group, 64 immigrants were murdered in Moscow in hate crimes in 2008, and another 223 were seriously injured in attacks. The attacks have become so routine, they barely register with the media, according to Alexander Verkhovsky, director of Sova.

I never did learn what happened to the Tajiks who lived on my block, or what caused the fire. The building was an elegant old structure but no doubt it was condemned for development, its inhabitants evicted, and then temporarily occupied by squatters until the bulldozers arrived. That used to be a very Moscow story. I’m hoping now that it’s an old one, too.