Tomsk: cultural treasure in the taiga 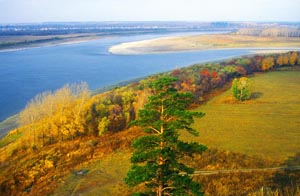 Archeological evidence suggests that the Tomsk region, part of the vast Ob River basin in central Siberia, has been settled for at least four millennia. By the time detachments of Russian Cossacks arrived in 1598, the native inhabitants included the Khanty and Siberian Tatars, who accepted the authority of Tsar Boris Godunov in 1603. A year later, in 1604, a fort was founded on the banks of the River Tom (a tributary of the Ob), and throughout the 17th century, the Tomsk settlement served as a bulwark again the steppe tribes of Kalmyks and Kyrgyz.

With the expansion of Russian control to the south during the 18th century, Tomsk’s military significance was replaced with a new role as a trade and transportation center for caravans from China. The expansion of the Moscow Road through Siberia in the middle of the 18th century provided further stimulus for growth, reflected in the construction of large brick churches, such as the Epiphany Cathedral (first completed in 1784) and the Church of the Resurrection (1789), a masterpiece of Siberian baroque architecture. In the 1830’s, the development of gold mines in the territory greatly increased the town's importance as a center of mining operations and administration. The Tomsk region also continued to serve as a place of political exile, as it had in the 17th and 18th centuries.

During the construction of the Trans-Siberian Railway at the end of the 19th century, Tomsk missed a golden opportunity when the Ministry of Transportation decided to place the railroad crossing over the Ob River to the south. This decision slighted Tomsk, but created the town of Novonikolaevsk, which later became the major Siberian metropolis of Novosibirsk. Tomsk settled for a branch line constructed in 1896, enabling the city to remain a center of trade and agricultural development in central Siberia.

The impressive scale of Tomsk’s commercial and residential architecture illustrates the diversity of Siberian culture at the turn of the 20th century. The Vtorov firm built one of Siberia’s largest department stores, which still adorns the central district of Tomsk. Tomsk also became one of Siberia's preeminent centers of learning, the location of Siberia's first university, founded in 1878. Among Russian institutions of higher learning, Tomsk State University is distinguished not only by its academic luster but also by its attractive, spacious campus.

It should be emphasized that Tomsk accepted a number of religious faiths in addition to Russian Orthodoxy. By 1910, the city featured the Catholic Church of the Holy Rosary (now restored for use), two mosques (both of which have been restored), a Lutheran church (rebuilt), an Old Believer Orthodox church and a large synagogue that is among the most beautiful in Russia. In 1911, the city’s northern area gained the neo-Byzantine Cathedral of Sts. Peter and Paul, which remained open for most of the Soviet era. Some of the churches were built of wood, such as the Old Believer Church of the Dormition, completed in 1913 and lovingly maintained today by the parish.

The most distinctive part of the city’s architectural heritage is displayed in its neighborhoods of elaborately decorated wooden houses, structures of solid logs often covered with plank siding. It is no exaggeration to say that the "lacework" of Tomsk's wooden architectural ornament – particularly the window surrounds, or nalichniki – is unrivaled in Russia for its lavish detail and the extent of its preservation. Many of these extraordinary wooden houses were built for merchants who lived in the Tatar Quarter.

The Tatar Quarter also contains the renovated White Mosque and a cultural center, located in a mansion built at the beginning of the 20th century for Karym Khamitov, a Tatar financial magnate. Other ethnic groups include the German diaspora, composed of settlers who moved to the area beginning in the 19th century. Viktor Kress, the current governor of the Tomsk region, is the most recent of numerous ethnic Germans to hold this high position.

The many positive trends in the region’s development during the early 20th century were crushed by savage fighting during the Civil War in 1918-1921. After that conflict, Tomsk’s fortunes went into steep decline, which was eventually reversed by the evacuation to the city of industrial and research facilities during World War II. This momentum, reinforced by strong institutions of higher education in Tomsk, continued after the war with the development of top-secret nuclear research installations for both military and energy purposes. Despite the benefits to the local economy, serious ecological problems followed.

With over a half a million inhabitants and a regional population of almost a million, Tomsk remains a leading Siberian center for administration, education, industry and energy resources. Protecting the environment remains a major concern, particularly in an area of stunning natural beauty. At the same time, dedication to the city’s historical environment – including its houses of worship – has succeeded in preserving an architectural legacy that is a Russian national treasure. Indeed, a walk through the historic neighborhoods of Tomsk shows just how much Russian culture belongs to the forest.