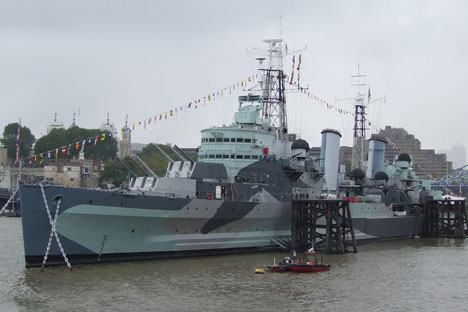 One of London’s most famous landmarks, the HMS Belfast, last week unveiled a major Russo-British restoration project, designed to restore the ship to her former glory.

While attempts to press the reset button in Moscow were hampered by seemingly entrenched positions, Russian goodwill was on display at a less rarified level, as ordinary Britons and Russians shared a poignant moment of fellowship on the waters of the Thames. There, in the presence of Arctic Convoy veterans from both countries, and with assorted dignitaries – including the Duke of Edinburgh and Russian presidential administration head Sergey Naryshkin – looking on, a team of Russian shipbuilders saw their labor of love come to fruition, as Belfast revealed her newly built masts.

One of the few surviving Royal Navy ships that served in the perilous Arctic Convoys, the Belfast braved temperatures of -30C to help keep Russia supplied with tanks and planes, as the war-ravaged nation faced the onslaught of Hitler’s armies on the Eastern Front during the Second World War. Although Russia’s sacrifice in the East – which allowed Britain and America to prevail in the West – dwarfed that of any other Allied power, the Russian people have never forgotten this reciprocal act of bravery: It remains etched on the national psyche.

As a consequence, the $1 million restoration project carries a special symbolic significance. The work – which began in April 2009, and has taken 18 months to complete – has been done for free by a team of more than 20 men and women from the JSC Shipbuilding Yard Severnaya Verf as a tribute to the British and Allied sailors who risked their lives on the convoys. It also stands as a fitting memorial to the 3,000 British seamen who died to keep the supply routes open.

Mr Naryshkin said: “The Belfast remains a symbol of the common brotherhood of the Russian and British nations. Future generations must know the reasons for, the course and results of the Second World War. Without this, it is impossible to build a safe world.”

The project is the brainchild of Tim Lewin, son of the late Admiral of the Fleet, Lord Lewin, an Arctic Convoy veteran. The idea came to him when, in 2005, he learned that the grime and drizzle of London had managed to do what the German navy, the sea and bitter North Atlantic winter had all failed to do: Belfast’s masts were beginning to crumble.

“I was working in Russia and at the same time looking for a suitable project to commemorate my late father,” Lewin recalls. “The idea of asking Russia to celebrate this era of mutual dependence by restoring HMS Belfast seemed deeply fitting. The plan was to use Russian steel, worked by Russian engineers, in a Russian shipyard to reflect the symbolism of the project; and this is exactly what has happened.”

A major tourist attraction,the Belfast draws around 250,000 visitors each year. The ship’s director, Phil Smith, believes the ship is a crucial sightseeing stop-off for any Russian vistor. “HMS Belfast may have been a British Royal Navy ship, but she is also part of Russia’s history,” he says.

“This new co-operation with our Russian friends echoes the co-operation all those years ago. Now, with more and more visitors coming to London from Russia, HMS Belfast should be on their ‘must-see’ list.”