On screen in London 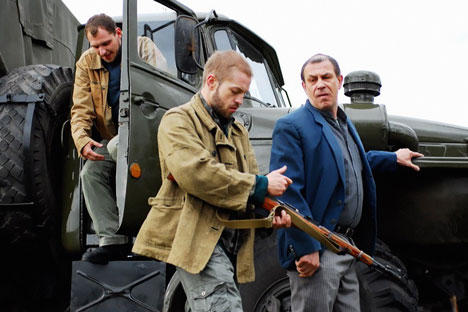 The 10-day 4th Russian Film Festival, which starts in London on Friday, offers a glimpse into modern Russian society.

It is a difficult time for Russian cinema, as it embraces reform during a time of economic crisis and has to face attempts by the government to establish tighter controls over the industry, but there is hope in the shape of a new generation of filmmakers that yearns to make independent, non-conformist auteur films.

At Kinotavr in Sochi this summer, and for the first time in a long period, there were signs of consolidation among film-makers with regard to the key issues. Foremost is the question of support for promising bright directors. Here the Russian Guild of Critics and the public jury were largely in accord – something that doesn’t happen often – mostly to do with the need to support and encourage promising directors.

The critics gave awards to My Happiness by Sergei Loznitsa, The Other Sky by Dmitry Mamuliya and Obratnoye Dvizhenie, and Reverse Motion by Andrei Stempkovsky. The same films won awards from the main jury.

Stempkovsky’s Reverse Motion will be screened in London. It is about the hardship of central Asian migrant workers and gives rise to a lasting impression of people caught between conflicts and struggling to communicate.

The Truce, also on show in London, is directed by veteran Svetlana Proskurina, and received the main prize at Sochi. The film itself was shot in the director’s signature manner, which would have been marred by extremes of classicism and mannerism but for a touch of humour and the inflow of fresh blood – screenwriter Dmitry Sobolev, cameraman Oleg Lukichev and producer Sabina Eremeyeva – from the new cinema generation.

One of the highlights of The Truce, and much praised at Sochi, is the performance of actor Ivan Dobronravov.

In Gastarbeiter by Yusup Razykov, an elderly Uzbek (who once protected Moscow from the advancing Germans) goes to the capital to find his grandson, who had moved there to earn a living, only to face humiliation and numerous tribulations. The authors of the film attempt to depict the issues arising for ordinary people following the collapse of the Soviet Union.

One War by Vera Glagoleva raises a topic that has been taboo for 60 years or so. This is a moving reappraisal of crime and punishment during the Second World War. The controversial film was Russia’s nomination for the Oscars, as well as Grand Prix winner at the Sofia International Film Festival.

Academia Rossica
Academia Rossica, a London-based charity, was set up in 2000 to promote cultural relations between Russia and the English-speaking world. Its activities include publishing an arts journal, Rossica, organizing such events as the Rossica Film Club and the Russian Film Festival in London, and it runs the Books from Russia stand at the London Book Fair.

In 2005, Academia Rossica launched set up the Rossica Prize for the best literary translation from Russian to English. In 2009, the Rossica Young Translators Award was established for entrants aged under 25.

Other films include the multi award-winning psychogical thriller How I Ended this Summer , set on an island in the Arctic Circle, romantic comedy A Man at the Window – which features Sochi award-winning actress Mariya Zvonareva – the gentle Sparrow , the 3D animation Star Dogs Belka & Strelka , and the adventure story The Golden Mean.

The documentary programme “Noughties Art” looks at the last decade in Russia… a window on the real Russia. There will be 10 films shown, one for each year of the decade, starting with 2000’s The Train Stop , to 2009’s The Revolution That Wasn’t.

The selection is presented by the director and documentary maker Vitaly Mansky, president of Russia’s ArtDocFest.

Russian animation is among the most creative in the world. The comprehensive animation programme includes Little Tragedies , based on Pushkin’s verses, and animator Garri Bardin’s The Ugly Duckling , a stop-motion film with Orwellian overtones. This adaptation of a Hans Christian Andersen tale was seen as so politically subversive that it was banned from Russian television.

Petersburg is a collage of animation and documentary footage. Other features include Faust , The First Meeting, About a Catfish and Poor Sharik.

On the centenary of his death, it is hardly surprising that Leo Tolstoy should be recognised with special screenings of his work on film. There will also be a retrospective of Sergei Bondarchuk’s films.

The 4th Russian Film Festival is organized by Academia Rossica and the films will be show at the Apollo Piccadilly in London. For more information call 020 7287 2614 or visit academia-rossica.org

Based on an article originally published in Kommersant.