The man who won Moscow 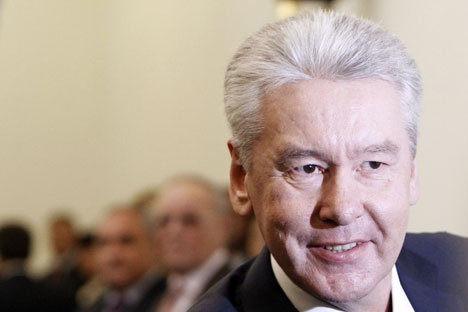 In Tyumen, Sobyanin is remembered as ‘communicative and easy-going. Source: Reuters / Vostock Photo

Pundits can’t agree on whether the new mayor is a gracious master of compromise who can help Moscow move forward, or a nobody guided only by his mentor, Vladimir Putin.

Proponents say the new mayor of Moscow, Sergei Sobyanin, shows an ability to compromise, offering a fresh start in the bruised city. Detractors have declared him a “nowhere man” who will go along to get along, especially when it comes to pleasing Putin. In the absence of a direct popular vote, most of the debate around Moscow’s new mayor took place online.

Leading daily Kommersant ran its own “elections” over the internet, while mainstream media remained cautiously optimistic about Sergei Sobyanin’s prospects as mayor.

Sobyanin has been in national politics, first as presidential chief of staff and then as deputy prime minister, since 2005.

Some of his critics complain bitterly that there is no essence to Sobyanin; their complaints read like the Beatles song: “He’s a real nowhere man, living in his nowhere land…” Leading business daily Vedemosti put it gently: “His early ability to change with the ruling party’s line, typical of Soviet bureaucrats, helped him many a time in his career.” Less flatteringly, Victor Davidoff of The Moscow Times wrote: “Sobyanin [is] already being criticized for being a nobody, not a public politician.”

It is probably this cardboard cutout stereotype that kept Sobyanin from scoring well in the online straw polls staged in Gazeta.ru as well as Kommersant . In the first round, participants submitted their favorite candidates for the post of Moscow mayor. In the eventual runoff, the top 10 contestants competed with each other and the “against all” option.

Nearly 50,000 Internet users ended up casting their votes during the first week of October, with liberal-minded lawyer and popular blogger Alexander Nevalny winning the election with 45 percent of the vote. Second place went to the “against all” option, while Sobyanin did not even make the list .

Yet Sobyanin is indeed the mayor. Many journalists wrote that he owes much of his political career to Prime Minister Vladimir Putin (who in 2005 replaced mayoral elections with appointments) – so much so that Vedemosti has taken to calling him “Putin’s Man.”

Not long after Putin’s ascent to the presidency, Sobyanin, as governor of his home region of Tyumen, proposed extending the presidential term from four to seven years (an initiative ultimately rejected by the president and parliament). In 2005, he also became one of the first governors to voluntarily resign from his popularly elected post and ask for a “nomination of confidence” from the president under the new system.

Putin nominated him promptly, but soon brought Sobyanin to Moscow to work in his administration.

While debate flurried around whether Sobyanin’s new job constituted a political loss or a gain for Putin’s team, one blogger concluded that “Sobyanin’s candidacy represents a compromise between the pro-Putin siloviki [politicians with origins in the security forces] and the pro-Medvedev modernizers.”

As a deputy prime minister, Sobyanin “began studying what all the ministries were doing,” explained a former colleague. “In two months, we did what nobody before had done. We sent questionnaires to all the ministers asking for quantitative targets they sought to achieve through their work … As a result Sobyanin had a 40-page document… which provided specific targets, goals and budget requirements for each ministry,” reported Vedomosti.

A government official told the same newspaper: “Sergei Sobyanin’s most important characteristic is his thorough knowledge of socio-economic issues, from housing to health.”

“Vyacheslav Timchenko, a Moscow City Duma deputy from the Tyumen region who has known Sobyanin for a long time, describes him as an ‘effective manager,’ who is also ‘humane’ in his management style,”according to Gazeta.ru .

Interestingly, Lola Tagaeva of Novaya Gazeta found that while “for Moscow pundits he’s one of the most closed national political figures… in Tyumen, they remember Sobyanin as communicative and easy to talk to.”

Once Tagaeva’s taxi driver found out she was a journalist from Moscow, he “drove [her] around the city for half an hour, pointing out restored churches, new daycare centers, McDonald’s and various sushi bars ‘Before Sobyanin, we tried to avoid downtown Tyumen altogether. That’s how bad it was.’”

In from the cold

Sergei Semenovich Sobyanin was born in Nyaksimvol, Western Siberia. After attaining a technical degree in university, he worked as a machinist before rising through the political ranks. In 1991, he was elected mayor of Kogalym; in 1996, he became a senator in the upper house of the Federation Assembly; and he was elected governor of the Tyumen region in 2001. In 2005, Sobyanin re-entered national politics as head of president Putin’s administration, following him to the cabinet after Putin became prime minister in 2008. “In terms of my work, I never involve my wife,” he once told a reporter. “She finds out what I've been up to via TV.”

The Siberian in Moscow

One trait separates Sobyanin from many other Putin cohorts: whatever new political post he occupies, “he never brings a large team with him,” reported Vedomosti , adding that “he probably won’t shake up the old (Luzhkov) team too much”.

“He is the man who has always looked for compromises and has never really had his own people,” Igor Bunin, president of the Centre for Political Technologies, told Gazeta.ru .

“He was considered to be a good and quite efficient governor of the Tyumen Region,” Georgy Bovt, leader of the opposition Right Cause political party, told RT television. “We should take into account that the Tyumen Region is prosperous in terms of money. In this respect, it certainly resembles Moscow, where lots of money also whirls,” he added.

Sobyanin created controversy in the media last week when he announced that jobs in Moscow should be preserved first and foremost for natives of the city, despite a burgeoning immigration population, reported Noviye Izvestia. The announcement was made at a meeting of trade unions, and a subsequent poll revealed that 63 percent of Muscovites supported the initiatives.

His intention to review Moscow’s grand development plan – approved by the administration earlier this year – also caused a stir, but some pundits remain optimistic.

“A lot should be done in organizing the road traffic… There are [also] too many offices in the center of Moscow. The mayor should carry out a revision to see which of these buildings are the result of high-rise development and should therefore be pulled down. The rules of high-rise development should undergo revision so that nothing of the kind should ever appear in the city,” said Bovt.

“The utilities sector is a far more important problem. It’s riddled with corruption… If he succeeds in solving part of these problems, he will automatically turn into a political figure,” Bovtconcluded.

Last week, City Hall announced it would allow the anti-Putin “Dissenters’ March” to be held on Triumphalnaya Square legally for the first time, choosing its application for a rally over the pro-Kremlin youth group Young Russia, reported Rabkor.ru.