The state prefers home-grown food as agriculture gets a boost 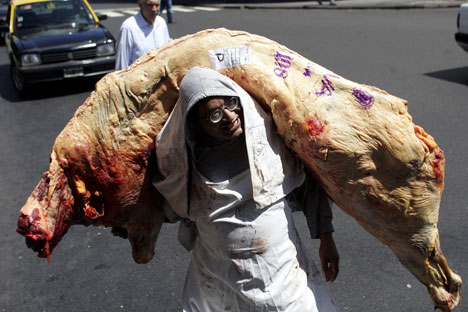 A partial ban went into effect with regard to Spanish pork thisyearSource: Reuters / Vostock Photo

In its drive to become  self-sufficient in certain foodstuffs, the government has introduced a partial import ban on meat.

Russia’s Federal Service for Veterinary and Phytosanitary Surveillance, Rosselkhoznadzor, has partially banned meat and pork imports from Europe and the US.

After world food prices soared in 2008, agri-product has become a strategic commodity. And despite being home to some of the most fertile land in the world, Russia continues to import 40pc of its food products, and this year may have to import grain after the devastating summer fires destroyed about a quarter of the crop.

Russia has been developing its meat production, but almost 20 years after the fall of the Soviet Union and collective farms, the country is still dependent on imports.

In September, president Dmitry Medvedev outlined state development plans for the sector for 2013-2017. He listed modernisation of food and processing facilities, and of storage, transportation, logistics and delivery systems.

“More attention should be paid to the development of meat and milk production,” Mr Medvedev said. “It is necessary not only to create agricultural holdings, but also stimulate the creation of small processing facilities.”

Russian producers have made progress with poultry, much of which is still imported from the US. In August, Russia lifted a ban on poultry imports from 72 US plants whose production processes met Russian requirements, leaving a ban in place for just five companies.

Chicken imports to Russia were a sticking point in talks between Moscow and Washington, preventing Russia’s accession to the World Trade Organisation (WTO). But at the end of September, Russian agriculture minister Yelena Skrynnik said all issues over Russia resuming poultry imports from the US had been resolved. Two weeks later Mr Medvedev said Russia would probably join the WTO in 2011, and last week President Barack Obama’s senior economic adviser, Larry Summers, announced Russia had at most one year before WTO admission.

However, deputy agriculture minister Alexander Belyaev said in September that Russia hopes to become a net exporter of chicken by 2012. Currently Russian chicken farms produce about 70pc of domestic demand.

Russia has much more work to do to develop pork and beef production and continues to rely on imports from near and far. Brazil has been hardest hit by recent bans on beef imports to Russia, which is one of the South American country’s most important markets for steak.

However, tiny Moldova has also been affected by the beef ban; the country is already in a fight with Russia over wine exports, which have also been declared unsafe. Rosselkhoznadzor has ordered tighter control over beef consignments imported from both countries due to high proportions of anaerobic and facultative anaerobic organisms in the meat.

Food producers, meanwhile, say it will take at least four years before beef production begins to rise. But prime minister Vladimir Putin said at the end of September that state bank Vnesheconombank would provide a $800m loan to Miratorg to set up a large-scale beef farm.

Elsewhere, Moscow investment bankers have been buying up land in Russia’s fertile south and setting up privately owned cattle farms.

Rosselkhoznadzor has also banned imports from five Spanish pork producers. Likewise, bans have been imposed on pork producers in Germany, Holland, France and the US.

America is also a big player in the pork market, but exports to Russia fell by almost two-thirds this year due to the bans. Rosselkhoznadzor claimed that it had found “excessive amounts of antibiotics” in the meat.

A salmonella outbreak in eggs in the US this summer further complicated relations between the two countries.