From Russia with love – a postcard from the catwalk 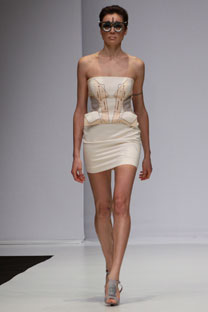 The first Brit to debut at Russian Fashion Week, designer Clare Lopeman is full of praise for her  adopted homeland.

As the old saying goes: those who can, do; those who can’t teach. Repeat this to Moscow-based Brit Clare Lopeman, however, and you’re likely to get the shortest of shrifts. That’s because the thirtysomething freelance fashion designer – whose CV reads like a Who’s Who of international labels – has also directed much of her talent towards developing fashion design programmes, as well bespoke training courses for industry giants such as Paul Smith, and the London College of Fashion.

Still, it must have come as a major surprise to friends and family when, in September 2008, Clare packed her thermal undies and headed off to Moscow to establish the fashion degree programme at the British Higher School of Art & Design. “It was mainly a career move,” she recalls of her momentous decision to decamp to the Russian capital. “However, Russia has a powerful culture and it felt like a bigger adventure than simply working in Europe or America or Australia. I was intrigued by the challenge.”

An adventure, perhaps, but she is aware that Russia has provided her with the breaks she might not have enjoyed in Britain. Consequently, she sees her Russian sojourn in a positive light. “Moscow is highly energetic and driven, and has a completely different sense of life and reality… voracious almost,” she enthuses. “The school is very well-connected, both in Russia as well as internationally, with lots of industry links.”

So, with her fashion degree very much in demand, does she consider herself as primarily an educator a designer? “I don’t think they are inseparable, as one can be both,” she concludes. “Each discipline enhances and supports the other. For students it’s very important to be taught by a practitioner.”

What becomes quickly obvious in conversation with Clare Lopeman is her self-possessed sense of direction, a quality sometimes lacking among naturally creative people. (“I think in order to have great style you need to know who you are,” she confides.) Even so, you could be forgiven for thinking that, as an English rose struggling to bloom in the furrowed earth of the Moscow bear pit, she would have wilted. She didn’t: in April, Ms Lopeman launched her new fashion label with her debut collection show at Russian Fashion Week.

Then, she turned to 100 Dresses – a classic Soviet dressmaking manual – for inspiration, wowing an unsuspecting audience with her own quirkily classic take on contemporary vintage chic. Drawing on her own experiences of living in Moscow, her fusion of graphic print and complex construction achieved a dynamic and contemporary aesthetic, with some of the creations achieving a retro sci-fi feel through the inclusion of optometrist’s eye-test spectacle frames into the ensemble.

Such high-profile exposure brought commercial success. “The work was quickly featured on blogs, such as Style Bubble, and this resulted in me securing my first stockist in New York,” she says. “I think being the first British designer to launch a label at Russian Fashion Week generated a lot of curiosity and has given the start of the label a real buzz.”

It’s not only professional matters that have proved rewarding: her whole Moscow experience has been a revelation. “Generally speaking, Russian People can be considered as quite cold with strangers and particularly foreigners,” she concedes, “but I have found the majority to be very friendly and interested in the fact that I am living and working in Moscow. Residing in Kitai Gorod (a well-heeled area close by the Kremlin, 20 minutes’ walk from Red Square), her neighbourhood sounds like a creative artist’s dream – “a bit surreal, but pretty and very old Moscow,” she says. “Its a mix match of blacked-out Ladas and 4x4s, a pink and white Orthodox church which looks like it is made of marzipan as well as a monastery close by.

“There are some artists’ studios and fashion showrooms in some run-down pre- revolutionary buildings. It’s all very atmospheric and large scale.”

With the latest edition of Russian Fashion Week having only just drawn to a close, Clare reveals that the designer who really caught her attention this time around was the ever-youthful poster-boy of the Russian fashion fraternity, Slava Zaitsev. “My technician used to work for him and he puts on quite a show, he is a Russian fashion icon,” she adds, warmly.

So, what does the future hold for the London-born Moskvichka? It seems that a return to Britain is on the cards, and not just for the food. “I realise how English I really am, when I am suddenly craving fish and chips – although I hardly ever eat them,” she admits. “I have been living here for two years and Russia has been the most amazing experience, but I have some plans that will be taking me back to the UK in the near future.”

As the fashion world waits to see what Clare did next, we can be sure of one thing: when the talented Ms Lopeman goes back to England, that big bejewelled Faberg é egg that is Moscow will have lost one of its British gems.