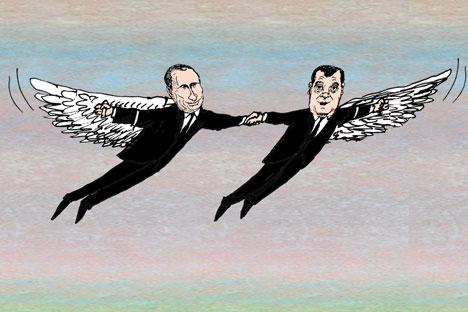 The dismissal of Yuri Luzhkov and the appointment of Sergei Sobyanin are seen by many as hallmark political events. The stand-off between the president and the Moscow mayor became a litmus test for Russian politics, revealing that the Kremlin was not lacking in political will. But what is grabbing people’s attention is the upcoming presidential election. Meanwhile, there is continuing uncertainty over the criteria for choosing the presidential candidate from the Putin-Medvedev tandem. This non-democratic approach, as well as Medvedev’s remarks about a possible third candidate, caused nervousness within Russia’s political elite, provoking new intrigue among officials and fuelling speculation on the looming redistribution of business.

Among the most hotly debated issues is the impact of the Moscow events on the alignment of forces between Putin and Medvedev . Some say Medvedev has narrowed the gap in his approval ratings with Prime Minister Putin since the summer, when Putin’s rating was buoyed by his role in extinguishing the fires. Some say Medvedev is now even ahead of Putin in their informal race to be the main candidate in the presidential election. And others view Luzhkov’s dismissal as Medvedev’s clean victory, a knockout punch, interpreting it as Medvedev’s decision to stand in 2012. Yet, their opponents argue that Putin is actually the one to have received a leg-up by having removed Luzhkov with Medvedev’s assistance. There is speculation out there, but there seems n o doubt that Luzhkov being shown the door did affect the balance of power, while interpretations differ.

Many expect Putin to respond. There is little doubt the prime minister will want to align his position, at the very least. It is from this perspective that the list of candidates for mayor of Moscow was largely viewed as pro-Putin, since there were no Medvedev protégés. At the same time, there is little understanding of the criteria for selecting the candidates and for the final nomination. Yet, some conclude that Putin has put one of his own in Moscow, since he is preparing to return to the Kremlin in 2012.

Luzhkov added fuel to the fire saying that Medvedev sacked him fearing he would support Putin in 2012. This, however, does not explain why Putin did not lift a finger to keep his supporter in Moscow. Moreover, Putin said the entire problem was created by Luzhkov, who failed to grasp the situation within the tandem.

Meanwhile, neither Putin nor Medvedev sees his steps as elements of competition with each other ahead of the 2012 election. Observers see what they want to see. Putin and Medvedev are not rivals. What they are doing cannot be seen as attempts to raise their competitiveness at the expense of each other.

Moreover, neither Putin nor Medvedev is interested in weakening the other, which would turn the tandem into something of a lame duck. Indeed, this would affect each other’s competitive advantages in the election. The opinion that Putin did not agree with the president could be the most undesirable in this respect. In this case, Medvedev becomes a president who lacks the support of his own prime minister, and Putin becomes a non-loyal prime minister, cooperating with the president instead of resigning. That Medvedev was in China when he dismissed Luzhkov, as well as the list of candidates for this position, indicates that the decision was made and agreed upon between the two of them.

Putin is known for having removed oligarchs from power, and now Medvedev, with Putin’s support, is reorganising the Kremlin’s relations with regional leaders. Even if using Russian methods and far from Western standards, the tandem is taking on the huge challenge of aligning the country’s regions. Luzhkov was one of the architects of Yeltsin’s now out-dated political system. One of its distinctive features was the excessive independence certain regions were given. Luzhkov’s removal completes the campaign against the political heavyweights in charge of those regions.

Meanwhile, people’s desire to see competition between Medvedev and Putin is understandable, since one of them will run in 2012, win and occupy the presidency for six more years. For now, I think the only obvious thing is that Putin will not remain as prime minister for a second term. Yet, as long as the question about who is going to be the next presidential candidate between the two remains a mystery (judging by the way they both explained it when answering my direct question in 2008, they are talking it over), they will both be interested in maintaining their political parity, meaning equal starting opportunities. This will not happen before the end of 2011. This is the reality, like it or not.

The popular stereotype about Putin and Medvedev’s teams does have some reason to it, but mostly it is the result of rivalries among officials and their guesses as to who will be president in order to show their personal loyalty in advance. The reality, however, is different: they are one team, the tandem, and those who think differently can render a disservice to their candidate of choice. It is also unlikely that any of them would step down of his own accord if the other one becomes the presidential candidate.

Nikolai Zlobin is director of the Russian and Eurasian programmes at the World Security Institute in Washington, DC