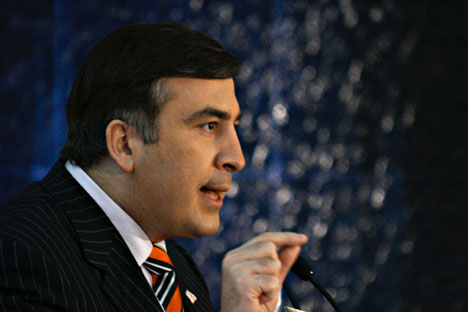 There have been important new developments in Georgian politics. On Oct. 15, the country’s national parliament made additions and amendments to its constitution, and as a result of these, Georgia will switch to a new model of government in 2013. The new model proposes a redistribution of power across branches of the Georgian government: The roles of parliament and government will be enhanced while the president continues to be supreme commander-in-chief and president of the Security Council. In times of political crisis, the president will retain the role of arbitrator, but he will lose the right of legislative initiative.

It could be possible to see the constitutional amendments as a routine legal procedure if it weren’t for a few important nuances. Mikhail Saakashvili’s second presidential term will expire in 2013, and he agreed in 2008 not to run for another. It is also important to remember that in January 2004, a few months after the Rose Revolution, Saakashvili won a referendum that demonstrated the trust the public had in him. At this time, his arrival was accompanied by raised expectations and the hope that the governmental failure Georgia experienced under Eduard Shevardnadze would soon be a thing of the past. However, Saakashvili did not win a second term as without a lot of effort, since by that time he had lost the support of the majority in Tbilisi and many other Georgian cities. In 2008, Saakashvili won enough votes to avoid a runoff, but a significant part of Georgian society considered the results invalid. This has led to a long power struggle between the government and the opposition. Saakashvili did not come out on top thanks to his exceptional political prowess, but because of problems within the opposition. In this situation, a third term for the country’s third president would have looked like an open challenge even to Saaskashvili’s moderate allies, especially considering such detrimental factors as the government’s territorial losses. It is therefore no coincidence that Saakashvili announced he would not be running for a third term. However politics cannot be neatly reduced to dry rules and formulas. There are many different ways to keep hold of power. A lawyer by profession, Saakashvili has chosen constitutional transformation.

According to the constitutional changes, the prime minister will become a key figure in Georgia’s governmental hierarchy. All documents must be approved by the parliamentary leader; any paperwork released by the president will bear no weight without this all-important signature. And while the president will be elected by popular vote, the prime minister will be nominated by the party holding the majority of seats in parliament. Considering that the ruling party, the United National Movement, is controlled by the State Chancellery (roughly analogous to the Russian Presidential Administration), it is not hard to predict who will be nominated as prime minister. If the constitution is thus configured, even the victory of a president allied with the “moderate opposition” will not break up Saakashvili’s regime.

In Georgia, it has often been the case that ardent government supporters have turned into radical oppositionists overnight, and visa versa: critics of the government and the president have suddenly become their loyal supporters. It is therefore highly probable that Saakashvili will retain leadership of Georgia, only under a new official title. His actions are legitimate from a legal point of view, and his political resources will stay as strong as they were before. Because of the parallels with the change of political leadership in Russia, many Georgian analysts and opposition activists have spoken about the “Putinization of Georgia.” The only difference is that Saakashvili, unlike Putin, is prolonging his term by changing the legislation.

The impact of these constitutional changes is by no means limited to Georgia’s domestic politics. Mikhail Saakashvili’s continuing presence on the international political stage is inhibiting a “reset” of Russian-Georgian relations. Up until now, Moscow has refused to enter into dialogue with Tbilisi until the ambitious leader of the Georgian state steps down. The Georgian government has interpreted this as direct interference on the part of the Russian Federation into its domestic policies. Today, diplomatic relations between the two countries have been severed and visa issues are decided at a special section of the Swiss embassy. Tbilisi is doing everything in its capacity to create new problems for Moscow. For example, it opened the borders for inhabitants of the North Caucasus, and is constantly propagating Abkhazia and South Ossetia as “occupied territories” on an international level, all of which are impediments to Russia’s entry into the WTO. In this way, despite minimal political contact (which is mainly channelled through negotiations in Geneva) and economic links (which have remained intact even after August 2008), the basic trend of Russian-Georgian relations can be defined as a “continuation of the conflict through peaceable diplomatic means.” Moscow is attempting to advance the recognition of the two former Georgian autonomous regions while Georgia is striving to achieve recognition of the fact of occupation. The fact that Saakashvili has retained power is preventing the start of the dialogue that is so necessary for the two countries.

Neither can we forget that Saakashvili is continuing to play the “Russian card” in Georgia’s internal political struggle with some success. Today many members of the opposition are not prepared to go along with the constitutional reform, but, recognizing this challenge, Saakashvili and his party are doing everything in their power to consolidate their position, and they have not thought of a better means of achieving this than a search for a common external enemy. But all this could further damage the West’s relations with Russia, since the Georgian government has for a long time been siding with the big players on the international stage, much to its own benefit. And here a lot depends on a correct and balanced appraisal of the situation on the part of the United States and the EU. On one hand, enthusiasm for the Georgian leader, which was so apparent in Washington and Brussels, has now cooled. This was very succinctly expressed by the French publicist Daniel Vernet, who wrote an article with the telling title “The withered roses of Tbilisi”. According to Paul J. Saunders of the Nixon Center, Mikhail Saakashvili’s administration has for a long time been undertaking a “calculated removal of other centers of political power and sources of alternative views in parliament and in the media.” In a recent article in the Washington Quarterly, political experts Lincoln Mitchell and Alexander Cooley argued that Washington needs to substantially correct its policy on Abkhazia, replacing it with one of “engagement without official recognition.”

However, the nuances that experts and journalists understand are much harder for politicians to embrace. In July, U.S. Secretary of State Hillary Clinton visited the capital of Georgia, as did the Foreign Secretaries of France, Luxembourg and Poland (Bernard Kouchner, Jean Asselborn and Radoslaw Sikorski respectively), and also the High Representative for Foreign Affairs of the European Union, Catherine Ashton. “Saakashvili visibly glowed when Ashton praised Georgia’s reform process on live television,” wrote journalist Matthew Collin. Saakashvili also “glowed” at Clinton’s conclusions about the “democracy” and “de-occupation” of Georgia. There are many reasons for this development, but from my point of view, the most significant is that the West has understood the fact that Saakashvili’s government is strong and the opposition is weak, and therefore the West has to be involved with him rather than with his hypothetical successors.

Can the West afford to repeat the same mistakes it has been making for the past two years, when Saakashvili’s actions have often not received the evaluation they deserve? And will the West continue to support Saakashvili even if this jeopardizes the important compromises it has come to with Russia, including New START, the “Corfu Process” (a joint discussion between the Russian Federation and the West on European Security), questions over Iran and WTO? Russian President Dmitry Medvedev was invited to attend the NATO summit in Lisbon in November, which confirms that the United States, the EU and the North Atlantic Alliance are all interested in having Moscow as an ally. To demand that Washington or Brussels must choose between Tbilisi and Moscow would be naïve to say the least. No one will have to make this choice. But what the U.S., the EU and NATO could do is exert pressure on Saakashvili to prevent him from using the opposition between the Russian Federation and the West to his advantage, enabling his retention of power in Georgia. The West does not want another putsch or a revolution in Tbilisi, but it is in the West’s capacity to encourage Saakashvili’s lawful, civilized and, of course, dignified departure. This might not happen at once, and it may not be in 2013, but the sooner, the better. In fact, it is not right that the will of one person should have such a great influence on the security of the Caucasus and the relations of the West and Russia. Therefore, a more critical attitude toward the constitutional reforms on the part of the United States and the EU could be extremely constructive, providing impetus to the general trend toward a “reset of relations,” and the dismantling of the barricades that are dividing Russia and Georgia.

Sergei Markedonov is a Visiting Fellow at the Center for Strategic and International Studies in Washington, DC.