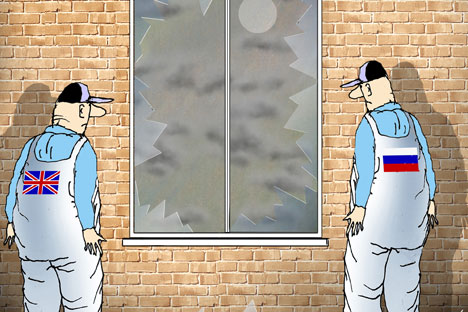 What has to happen for Russo-British ties to improve? Obviously, the recent visit by British foreign secretary William Hague was not enough. The atmosphere of Hague’s talks with Russian president Dmitry Medvedev and foreign minister Sergei Lavrov was definitely more cordial than the one Hague’s predecessor, David Miliband, could ever dream of. President Dmitry Medvedev during his meeting with Hague reiterated his suggestion to “normalise” Russo-British relations, first made by Medvedev in a talk to former PM Gordon Brown back in 2008. Hague nodded politely, but did not back up his body language with any substantial statements. In his speech, Hague made it clear that the killing in London of controversial Russian businessman Alexander Litvinenko in 2006 was still standing in the way of improved ties.

One might retort, however, that there was hardly a year in the whole of the 20th century when “something” was not standing in the way of normal relations.

Often this “something” had a peculiar hypothetical nature and proved to be a phantom of the imagination of the two countries’ elites or a deliberate provocation.

This was the case with the infamous “Zinovyev Letter” in 1924, when Grigory Zinovyev, executive secretary of the Communist International, was accused of authoring a letter calling for anti-government unrest in the British Army and in Ireland. The letter’s text was published by the Foreign Office. Zinovyev’s authorship was never proven, but the damage to relations was tremendous.

Ironically, rumours in Russia about an imminent war with Britain led to Russian farmers’ reluctance to sell agricultural products to the state in the autumn. This created the infamous “harvest crisis” of 1927, which in turn became one of the main factors pushing Stalin to start mass collectivisation in 1929. Thus, one of the greatest tragedies of the 20th century, the famine of 1932-1933, had its roots in mutual suspicion.

The anecdotal stories, such as the sex scandal aurrounding the secretary of war John Profumo in 1963, who happened to have a girlfriend in common with a Soviet diplomat, concealed behind themselves the Cold War tragedies, such as the confrontation around West Berlin or staged coups in the Middle East.

It has been widely observed that Russo-British relations improved in times of trouble. The existential threat posed by the Nazi expansion to both Britain and Russia made us covertly reluctant, but close allies during the Second World War. Could the economic and financial crisis, which is still far from over, be just one more beneficial challenge of this kind? Interestingly, the year of the Litvinenko case, 2006, was a record year for Russo-British economic cooperation. Our bilateral trade reached $12.8bn at the time.

In 2009, when both the crisis and the negative political atmosphere bit the deepest, we barely reached the level of $10bn.

The unprecedented budget cuts which both Britain and Russia are now facing, are a powerful argument in support of realism.

This time we are not talking about life and death, as in the Forties, but the challenge is nevertheless existential, since the quality of our existence is at stake.

In today’s Russia, as well as in Britain, millions of families are denying themselves everything except bare necessities in order to be able to send their children to a decent school.

So it is not accidental that Prime Minister David Cameron chose Churchill’s wartime overtones for his recent speech on the need to create new businesses (“Your country needs you”).

During the war, Churchill overcame his deep (and justified) aversion towards Stalin, because his country needed Russia’s help in order to survive.

Why can’t our governments overcome some of the much lesser differences now? New jobs and businesses could be the reward.

The fact that modern Russia is not Stalin’s Soviet Union and, consequently, not even a potential enemy to Britain, does not require more proof than a brief walk through Moscow or a quick scan of the newspapers.

Even the language used by our leaders for dealing with the current crisis is not very different on both sides of the European landmass. When during the crisis the workers of a small town of Pikalyovo in Russia suddenly found themselves out of work due to the closure of the local cement plant, Prime mMinister Vladimir Putin echoed Britain’s work and pensions secretary Iain Duncan Smith, entreating the Pikalyovians to get on the bus and find work in the neighbouring town of Tikhvin.

On closer inspection, the Russian prime minister had to admit that “the distance seemed short only during a quick flight on a government helicopter”. Iain Duncan Smith or former Tory MP Norman Tebbit, who suggested a bike as means for increasing labour mobility in 1981, could probably make a similar observation in Britain…

This does not mean that the unresolved problems should be forgotten, they just should not be speculated on. The Litvinenko is becoming a classical example of a situation when “excess of information kills initial information”.

So, we can spend the next 80 years just remembering all the tantalising anti-Putin “versions” of the Litvinenko saga. Or we can, without forgetting this strange story, proceed with some more important themes.

Americans chose to “reset” relations with Russia under President Obama. Why can’t America’s biggest and closest Atlanticist ally do the same?