From nuclear deterrence to universal security 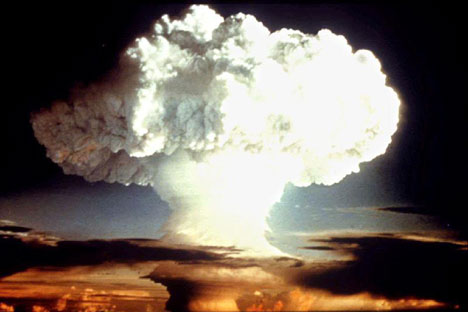 Igor Ivanov, Minister of Foreign Affairs of the Russian Federation (1998-2004), Secretary of the Security Council (2004-2007), Doctor of Historical Sciences, Professor of the Moscow State Institute for International Relations (MGIMO)

Mikhail Moiseev, Chief of General Staff, First Deputy Minister of Defense of the Soviet Union (1988-1991), General of the Army

In 2010, important events in the area of nuclear disarmament and non-proliferation have had a positive impact on the strengthening of international security.

The presidents of Russia and the United States signed a new START treaty in Prague. When the treaty is ratified, strategic relations between the two nuclear powers will become more sustainable, transparent and predictable.

The multilateral Nuclear Security Summit held in Washington, DC, resulted in decisions on improving the security of nuclear materials in the world.
The regular Nuclear Non-Proliferation Treaty Review Conference successfully led to an adoption of the Final Document, which calls for measures to strengthen the Non-Proliferation Treaty, its regime and related institutions.

Undoubtedly, all these measures are quite helpful, but so far they have not touched upon the principle of mutual nuclear deterrence. The paradox of nuclear deterrence is that it is by nature backward looking—it is aimed at the threats of the past century. Today, however, the possibility of a major armed conflict between the largest world powers and their allies in our increasingly globalized and multipolar world is close to zero.

Nuclear deterrence is impotent in the face of the new threats of the 21st century, namely: proliferation of weapons of mass destruction and their delivery systems, international terrorism, ethnic and religious conflicts, and trans-border crime. Moreover, in some cases, nuclear deterrence encourages the proliferation of weapons of mass destruction and missile technology, or impedes deeper cooperation between powers in their struggle against these threats (for example, the joint development of anti-ballistic missile systems.)

So that nuclear deterrence will not get in the way of cooperation between the main players on the global stage, it is necessary to continue negotiations to bring down the militarization level. These negotiations must be based on the minimum sufficiency principle, must strengthen strategic stability by ensuring equal and universal security for all parties, and must exclude the possibility of a first strike due to technical failure, a faulty assessment of intentions of the other party or lack of time for making decisions by the political leadership. The START Treaty meets these needs, but there is a lot to yet be done in this area.

The concept of nuclear deterrence has turned out to be an insurmountable obstacle on the long and hard road to total nuclear disarmament. Everyone knows that there are both supporters and opponents of nuclear disarmament in the United States, Russia and other countries. Although some are simply holding on to the ideological stereotypes of the Cold War, there are many who voice specific and reasonable concerns in relation to this process. Their arguments should not be brushed aside; in fact, they should be taken into account in order to lift the existing barriers to further deep nuclear arms cuts.

In Russia, for example, there is a widely felt sentiment that the nuclear potential of the country is a major attribute of Russia’s status as a world power, without which its foreign policy interests will not be taken seriously—neither by the United States, nor other countries.

We are confident that the status of Russia in the world will mostly be defined by its level of economic modernization, improved living standards, social and political rights and freedoms of its population, and scientific and cultural developments. Unfortunately, while such measures as the projection of force and its direct application are used in international relations, Russia will have to maintain a relatively high level of military readiness and nuclear potential to protect itself and its allies and defend its legitimate interests.

Thus, the way to nuclear disarmament is through the building of mutual trust and the strengthening of international security and stability. The Obama Administration has reaffirmed the United States’ commitment to multilateral action. This commitment includes: ensuring international security and strengthening its legal framework and existing institutions; the supremacy of diplomacy in resolving complicated controversial issues; and a partnership with Russia based on the principle of equality. It is crucial that these principles are realized in practice in the foreign policy of the United States and its allies.

These principles are equally relevant for anti-missile defense, ordinary weapons and non-nuclear strategic delivery vehicles, as well as militarization plans for outer space. But these and other areas of arms reduction will require extra far-reaching, trust-boosting measures.

In the longer term, we believe that a world without nuclear weapons does not equal the world as it is just without the weapons. An international system built on substantially different principles and institutions is needed. A world free of nuclear weapons should not become one where other weapons of mass destruction, conventional armed forces, state-of-the-art non-nuclear weapons and systems based on new physical principles are used for waging wars.

This new world must also consider the role played by local conflicts as well as large-scale wars. Now, smaller countries regard nuclear weapons as a way to balance out the huge dominance of the leading powers. This is indeed one of the motivations behind nuclear proliferation at the regional level, which increases the threat of nuclear terrorism. The removal of such threats will require robust international mechanisms for the peaceful resolution of all types of conflicts.

That is why implementation of the strategic goal of nuclear disarmament is only possible with a serious overhaul of the international system in general.

Without a doubt, it would help to resolve other key issues of the 21st century, such as those related to the global economy, energy supply, the environment, climate change, demographics, epidemics, trans-border crimes and religious and ethnical extremism.

In this context, nuclear disarmament is not an end in itself; rather, it is one of the most important prerequisites for reorganizing the international community literally on a more civilized basis and in accordance with the needs of the new century.