On the Kremlin’s stove (video) 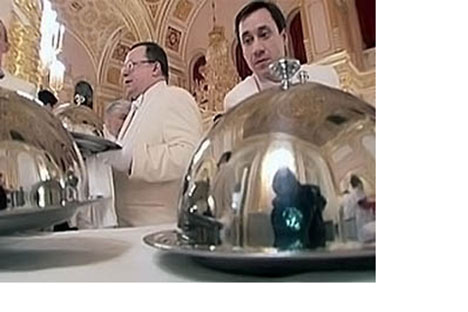 “At one time, BBC was preparing a major report on the Kremlin’s culinary secrets,” said Viktor Khrekov, press secretary for the Office of Presidential Affairs. “Last winter, a similar story was developed by French television producers. They were especially interested in a French chef who is now working in the Kremlevsky complex."

Interestingly, a correspondent of the French TV5 station introduced his fellow countryman, Jerome Rigaud, as “a young French chef who manages all stoves in the Kremlin.” That is far from the case. Of course, the French chef does not manage all the stoves in the Kremlin: the Kremlevsky food production facility is an enormous establishment with 800 employees who provide food for at least 5,000 clients daily. Kremlevsky not only caters for protocol meetings and official receptions on the territory of the Kremlin, but also provides food for the audience, soloists and ballerinas of the Bolshoy Theater, personnel of the Presidential Administration and the Office of Presidential Affairs, and organizes banquets and cocktail receptions for heads of state.

Jerome is a brand chef of the Kremlin – he has been working in Russia since 2007 and manages 30 cooks. According to Viktor Khrekov, a French chef in the Kremlin is a fortunate combination of the Russian kitchen traditions with the modern trends in European cooking.

It’s funny, but Rigaud himself rates Russian cooking higher than the French. The only people who eat more delicious food, in his opinion, are the Italians and Japanese.

Meanwhile, in an interview with his fellow countrymen, he said that he has mastered the Russian president’s tastes: “He likes fish and other seafood, such as lobster salad, for example. He also enjoys exotic dishes, sweet and salty.”

In exceptional cases, chefs of foreign leaders are allowed in the Kremlin’s kitchen. They still remember how Nursultan Nazarbayev’s chef cooked pilaf. He not only brought the food with him, but even the large cooking pot.

The head of production at Kremlevsky, Antonina Znamenskaya, told Rossiyskaya Gazeta (RG) about the foreigners’ reactions to the dishes of the Kremlin: “They are surprised by it all: our pastries, they also like our pies. Fruit drinks, dumplings – these are the things no one has yet refused.”

And with the pride of a professional chef, she concludes: “They eat it all.”

Each master chef has a favorite dish – an object of pride. For Antotina Znamenskaya, it is stuffed fish, mainly pike. For her predecessor, Nelly Emelyanova, the key dish was goose, prepared with a special recipe. The Queen of Netherlands, after a banquet in the atrium of the Bolshoy Theater, said she had never before tasted anything like it.

The translator said: “The Queen is in awe.” The Prince of Spain also liked the goose. As part of the protocol, the prince also expressed his thanks.

Hamas leaders enjoyed the turkey in so-called banquet execution and quail the most. The only thing that was left on the plates was lemons.

Thatcher had at one time spoken highly of our borsch broth with spicy toast. The sour-sweet broth is prepared by the Kremlin’s chefs with beet broth, poultry, cheese, tomatoes and garlic. The toast is spicy and crisp. The same borsch was made for Putin. According to the chef, he liked it. In general, however, chefs say that Putin prefers simple food, such as bread and herring, for example.