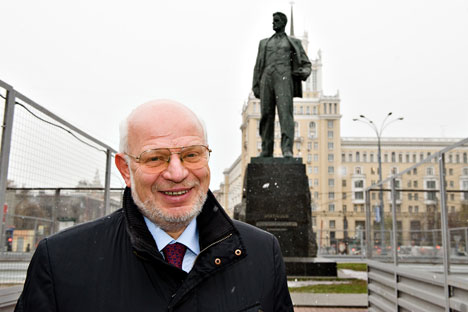 Fedotov, previously a Kremlin critic and secretary of the Union of Journalists who joined Gary Kasparov’s Free Choice campaign in 2008, was appointed after the controversial resignation of his predecessor, Ella Panfilova. Since the interview, Fedotov has already scored a significant victory in defense of free assembly, acting as liaison between Moscow authorities and the organizers of the Strategy 31 campaign. Strategy 31 is named for Article 31 in the Russian Constitution. Fedotov has announced since this interview that he will appear at Triumph Square on the 31st of the month, when the protesters will gather there (or nearby as the square is under reconstruction), along with human rights ombudsman Vladimir Lukin, to ensure their free speech is protected.

When a top official takes office, the first thing people usually focus on is “the first 100 days in office” in order to make an initial judgment about his work. As the President’s Human Rights Advisor, what are you hoping to achieve during this period?

If I succeed in stopping people from getting beaten and roughed up during opposition protests on Triumph Square on the 31st of every month, this will be an important achievement: Our human rights and opposition leaders have submitted 12 applications for holding protests [on the square] each month, and each time they have been turned down by the Moscow authorities. I hope to resolve this deadlock. We Russians know that our main problems are fools and roads. I think this combination (fools and roads) is the response to the two classic questions in Russian history: “who is to blame?” and “what is to be done?” Who is to blame? Fools. What is to be done? Roads. I think our priority during the first 100 days in office and later on will be to turn dead ends into roads. The situation with Triumph Square is a dead end. Now, this dead end should become a road, one of understanding between the public and authorities.

What is your immediate agenda, how do you see the agenda for the foreseeable future?

We are looking to discuss three issues at our next meeting with the President. The first one is about state policy on children, maternity and childhood, while the second is about judicial and police reforms. As you know, President Medvedev prepared a draft law on the police.

That is, the reform of the Ministry of Internal Affairs?

Yes, it is the reform of the Ministry of Internal Affairs. And the third issue we plan on looking at is de-Stalinization. Conventionally, we call it “de-Stalinizing the public consciousness.” In fact, this covers a broader range of problems, including eliminating the remnants and behavioral stereotypes typical of a totalitarian state.

How will you evaluate your de-Stalinization campaign’s success?

Indeed, we have no plans (no immediate plans, at least) to rename streets, remove monuments and destroy any other symbols of our totalitarian past. On the contrary, we want to begin with creation, not with destruction. We want people to remember the victims of Stalin’s regime and erect monuments to them; we want to name streets after them; we want to build museums devoted to their memory. We believe that this can be very useful for educating society, especially young people, because they should know the truth about their past. Opinion polls will show us how successful our program is, thus helping us decide whether we can go on any further or not.

The Western press reports that Russia is one of the world’s most dangerous countries for journalists. The names Khlebnikov and Politkovskaya come immediately to mind, as well as those working with journalists by supplying them with information, such as Natalya Estemirova. Investigations into journalist murders are very slow in Russia. What has to be done to ensure greater security for journalists in our country? What is known so far about the investigations into the Politkovskaya and Estemirova killings?

Before my appointment as the presidential adviser, I was director of the Center for Journalism in Extreme Situations of the Russian Union of Journalists. I dealt with all kinds of cases involving attacks on journalists, their persecutions and firing, and all other cases of their rights being violated. Unfortunately, journalist killings are indeed investigated very poorly, but I do not think the authorities are doing this on purpose. These kinds of crimes are very complicated, it is difficult to investigate them, and the authorities can do little if anything, even if they would want to investigate them. I think they really do want to know the truth. But today it is simply not something we are capable of doing. Things are made even worse by our law enforcement agencies simply having forgotten how to do their job, and they only show any desire to work when they understand that there is something in it for them.

In other words, this is not just about journalists, but also about our law enforcement agencies in general?

As for corruption within the law enforcement organs, our readers have been reading a lot about them recently in connection with the Sergei Magnitsky case, which has been covered thoroughly by the U.S. and other media. We have found out that Oleg Silchenko, the officer who oversaw Magnitsky’s case before his death, has been promoted. What do you think this promotion could mean?

I don’t know the specific details of this story but I can say that Sergei Magnitsky’s case is being investigated by a special working group at our Council. This group is led by Lyudmila Alexeyeva, a well-known human rights advocate and head of the Moscow Helsinki Group, and I fully trust that her findings will be objective. As for that investigator’s promotion, I can only assume this was a purely formal promotion for having served a certain period in a respective position. I believe this was purely an automatic promotion, and perhaps absolutely justified, since there were no charges against him, as far as I know. When the appropriate charges are made and proved, and there is a court ruling, then whatever promotions he might have gotten will be revoked. I hope we will have a resolution soon.

At our next meeting with the President we plan to raise a whole number of issues regarding the police and judicial reforms. During these discussions with the President we will propose some ideas on how to make our law enforcement system more effective, more transparent and more palpable to people. For example, I am going to propose that the President’s law “on the Police” should envision the creation of an independent commission to deal with complaints against the police. There is a special commission in Britain that considers complaints against the police and has a staff of several thousand investigators. The idea is to take the so-called internal security system within the Ministry of Internal Affairs out of the ministry, making it an independent body, de facto independent of the government but financed by the state.

There has been much talk recently that the Federal Security Service (successor to the KGB) has an excessive amount of power, and the Ministry of Internal Affairs also has broad powers in all matters concerning the fight against extremism. How do you understand extremism? Can public protests and dissatisfaction be seen as extremism?

Under extremism I understand everything having to do with violence or the threat of violence that puts people’s lives and health in danger. Oliver Wendell Holms, a Justice on the U.S. Supreme Court, once noted that one should not cry “fire” in an overcrowded theater, since it could cause panic and chaos, and people could die in the ensuing stampede. This is why one should not cry “fire.”

Yelling “fire” in an overcrowded theater in order to cause panic is extremism. Overturning cars, crashing shop windows and beating passers-by is extremism because it is violence, no matter what kinds of noble slogans you use to cover it up. Unfortunately, our law “on countering extremist activities” does not support this concept, because it offers a very broad definition of extremism, from defaming civil servants to terrorism. I do not understand how events like September 11th and defaming some minuscule municipal official can be put together. I cannot grasp it. I believe extremism implies violence that threatens people’s lives and health. Therefore, we will see what we can do to amend the law “on counteracting extremist activities”.

I have been dealing with this issue for eight years already, but so far to little avail. I, however, had also not been a presidential adviser, which I am now.

I think your congratulations should be addressed not to me but to each and every person who wants to see Russia as a democratic country guided by freedom and the rule of law. I think the President reaffirmed his commitment to the principle of putting freedom above suppression. His directives have been constantly lambasted for not being translated into real action. Well, here’s it is. He did his part by appointing me, and I will do the rest.

Right, but unlike your predecessor, you have been promoted to advisor to the Russian president [rather than council chairman].

MF: Yes, indeed. It was my suggestion, and the President supported it. I think it is very important that the Council Chairman should be not just a public figure but a high-ranking official, too. Why is there any need for this? Well, when a public figure addresses a minister, prosecutor or any other state official, it’s as though they are coming from a third party, whereas when they are addressed by a high-ranking official, and one of their own who is part of the same public service hierarchy, it is easier for them to find common ground. My presidential adviser status is aimed at boosting the efficiency of my work with state officials in particular. As for NGOs, the efficiency of my work will depend on how I will meet their expectations and their interests. I hope they understand that I myself am part of an NGO: I am Secretary of the Union of Journalists and hope to continue being so.

Did I get it right that the initiative was yours, not the President’s?

Yes, this was my initiative, and the President backed it. Furthermore, I want to point out that a Presidential Advisor has far greater opportunities for direct contacts with the head of state compared to the Council Chairman. As President Medvedev told me, if his Advisor calls him, he will call back no later than the next day. This means I will be able to contact the President when I need to.

We wish you success in your new job.