If it's cold, it must be Russia 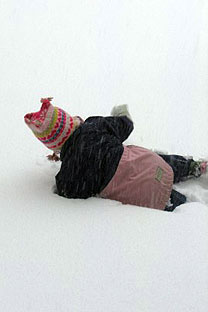 This morning, as we headed out the door to school, K said, “Today reminds me of Russia…it’s cold!” I wondered if she actually remembered being cold in Russia or if she just knows that in Russia much of the time it is cold.

K lived in Moscow until she was five-and-a-half, and while I know those years shaped the person she is, I also know that in reality she does not recall much of that time. She remembers her preschool and going to eat in the stolovaya; she remembers the park by our house and having brunch on Sundays at the U.S. Embassy. But she does not remember riding the trolleybus around the Garden Ring (as I realized yesterday when our nanny was reading a poem about a child doing just that); she does not remember the name of our metro station (although she does remember her sister falling down the escalator there) and I question whether she actually remembers being in Red Square. Unlike a tourist, who remembers famous buildings or funny incidents, K remembers the mundanity of everyday life. Hers just happened to take place in a city many find an exotic destination.

I called this blog “Point of Origin,” because it was intended to tell the story of how I coped with repatriating, a process defined as “returning to one’s point of origin,” and how more than two years after moving from Moscow to Washington, DC, I still find the process unsettling. But as difficult as the process has been for me, I also have to deal with the struggles of raising children who are living outside of their point of origin. K takes a lot of pride in speaking Russian and is extremely tolerant of the workload that comes with going to school in two languages. She will tell people she is Russian, but I think she knows somewhere that she is not.

The reality is that she doesn’t quite know what she is. There is a term for children of diplomats or serial expats who grow up overseas; they are called “Third Culture Kids.” I think K, however, is something else. She is a product of two distinct, powerful cultures—one by birth and one by experience. When we lived in Russia, I spent a lot of time thinking about how to teach my children about what it means to be American. Now, living in the United States, I struggle with how to maintain their ties to Russia.

For now, I am happy they know (at ages 6 and 7) that there are other countries than the United States and other languages than English. I try to teach them that there are two sides to every story and that issues must be viewed with a critical eye rather than blind patriotism—no matter what country you feel patriotic about. Recently K’s Russian teacher said that maybe she would grow up to be an interpreter as she has such an intimate knowledge of two languages. Even if she doesn’t take that career path, I hope she will be able to be an objective interpreter of the two cultures she also knows so well.