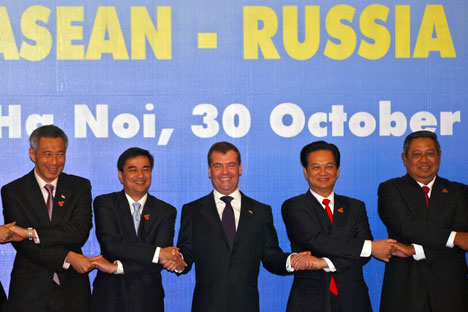 On October 30, Russian president D. Medvedev attended the second Russia-ASEAN summit in Hanoi (the first Russia-ASEAN summit convened in Kuala Lumpur in 2005). The forum was meant to give a boost to the cooperation between Russia and East Asian countries which, as a Kremlin official related to the media on the eve of the event, hope that Russia can balance the permanently growing US influence over the region.

Currently Washington is pouring massive investments into the military sphere of the Asia-Pacific. US initiatives in the region include the construction of an aircraft carrier dock, the creation of a missile defense system, and an $8 bn upgrade of an aerodrome on the Island of Guam. The Pentagon also invested $126m in the modernization of the military infrastructures on Great Britain's Diego Garcia Island which will serve as a repair base for submarines, every one of which is equipped with 154 cruise missiles and rivals an aircraft carrier group in terms of total firepower. Washington says the efforts are made in response to China's military buildup in Asia-Pacific, but the region's countries are predictably concerned over the emerging confrontation and therefore interested in maintaining a local balance of superpower interests. Moscow discerned the contours of the situation: president Medvedev stated in Hanoi that Russia is open to new regional alliances, and the admission of Russia - along with the US - to the East Asian Community formed in December, 2005 became a serious result produced by the summit. At the moment the East Asian Community comprises the ASEAN countries plus Australia, India, China, New Zealand, Korea, and Japan.

The summit focused on the future of the economic cooperation between Russia and East Asian countries. Combined, the ASEAN GDPs, shares of global trade, and investment volumes respectively account for around 60%, 50%, and 40% of the world's total. The populations of ASEAN countries altogether number 580 mln. As a group of steadily growing economies with GDPs adding up to $1.5 trillion and a cumulative trade turnover of $1.7 trillion, ASEAN ranks among the global heavyweights and by all means plays the key role in Asia Pacific.

Russia's share of the AEAN trade turnover in 2009 was a modest $6.8 bn, and expanding the economic cooperation between Russia and the ASEAN countries clearly deserves a line on the priorities list. In the run-up to the summit, Moscow adopted a 2010-2015 program of energy cooperation with ASEAN including plans for the traditional oil, gas, and electric power energy sectors as well as for renewables, nuclear energy, and environment-friendly technologies. Russian diplomacy chief S. Lavrov said following the summit that Russia's ASEAN partners are keenly interested in the nuclear energy sector where Russia has a lot to offer and in jointly probing into the potential of the geo-thermal power generation.

New Zealand's prime minister expressed a typical perception of Russia during the debates over a possible free trade agreement between the two countries when he described Russia as a country with a lucrative market and quantities of valuable resources like oil and gas. Hoping to break the stereotype, Russia is inviting ASEAN to work together in the high tech sphere. In his summit address, president Medvedev praised the Russia-ASEAN cooperation in the electric power, nuclear, renewable energy, and gas sectors but laid out a bolder vision for the future based on joint efforts in high tech areas such as machine-building, new materials, medicine, Earth remote-sensing, aerospace, and Russia's recent staple – the satellite navigation which should, along with other uses, help take timely measures at the face of natural disasters.

Oftentimes – on the global market and in Asia in particular - Russia's inferiority complex stemming from its over-reliance on natural resources puts obstacles in the way of positioning the country in a more realistic fashion, demonstrating its capabilities, and thus advancing its national interests. The Russian nuclear sector, for example, should be able to win for the country strong positions on the more high tech side of the energy business. As a step in the direction, the state-owned Rosatom secured a contract to build Vietnam's first nuclear power plant with two 1,000 mW facilities. Russia also boasts advanced R&D in renewable energy sources.

Up to date, Russia's advent to Asia used to be hindered by evident lack of persistence. Customarily ascribing priority to its relations with the West, Russia only occasionally switched to cultivating ties with the Asia-Pacific. Hopefully, Moscow's assertiveness in Hanoi and its plan to host the 2012 Asia-Pacific summit signal a rising awareness about Asia in the ranks of Russian decision-makers.

This story by Igor Tomberg, Director of Energy and Transit Studies Center of the Institute for Oriental Studies of the Russian Academy of Science, professor at the Moscow State Foreign Relations Institute of the Russian Foreign Ministry, Strategic Culture Foundation expert, was published in International Affairs magazine.