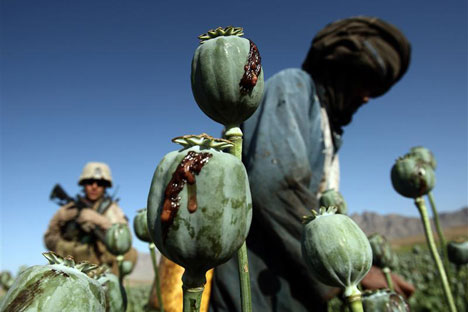 Afghan President Hamid Karzai harshly criticized the first ever Russian-American anti-drug operation in Afghanistan. He said in a statement that the raid was a violation of his country’s sovereignty because Russian participation had not been coordinated with Kabul. Russia refuses to take the blame, as it was the responsibility of the coalition forces to coordinate the operation with Afghan authorities. The spokesman for the Afghan president’s administration explained that Karzai’s criticism was directed at the United States, not Russia.

The joint anti-drug operation was conducted in the early morning of Oct. 28. During the raid, agents destroyed four opium-refining laboratories—three producing heroine and one morphine—in the eastern province of Nangarhar. According to Viktor Ivanov, head of the Russian Federal Drug Control Service, the agents confiscated 2,000 lbs of heroine, 332 lbs of opium and drug-making equipment. "The Central Asian market will be missing 200 million individual doses," said Ivanov.

This raid can be considered a breakthrough for Russia and the United States in coordinating their counter-narcotics effort. Russia has long criticized the United States for its lack of action in destroying poppy crops and drug laboratories in Afghanistan. The Russian drug control service estimates that 30,000 Russian citizens died from Afghan heroin in 2009 alone. The U.S. government has generally responded that the eradication of poppy fields could antagonize the local population and push them into the arms of Taliban.

Viktor Ivanov told reporters that the raid, which took three months to plan and prepare, involved 70 U.S. and Afghan agents plus four Russian agents. "The operation was initiated based on the data provided by Russian operatives," said Ivanov.

Although the operation was an obvious success, Afghan President Hamid Karzai was angry about the unauthorized foreign interference. On Saturday, he issued a strongly worded statement, calling the Russian-American raid a blatant violation of Afghan sovereignty and international law. Karzai claimed he had not been informed about it and had not given his approval for the participation of Russian agents.

"The Afghan government would like to expand its cooperation with the Russian Federation in a variety of areas including a joint fight against narcotics," said Karzai’s statement, but emphasized that Afghanistan wants to work with Russia on a bilateral basis. "No organization can conduct military operations on our territory without prior approval of the Islamic government of Afghanistan," warned Karzai.

The Russian authorities, however, do not see themselves as infringers of Afghan sovereignty. "In this operation we partnered with the International Security Assistance Force and we were not supposed to contact Karzai’s administration for approval,” said Mikhail Margelov, chairman of the Russian Federation Council Committee for International Affairs. “Russia acted in full compliance with international law, under which it is the coalition that is the combatant in Afghanistan fighting in the interests of the legitimate Afghan government led by Mr. Karzai." The Russian drug control service also did not have to ask the Russian parliament for permission for its agents to take part in the Afghan raid. "We had not been planning to deploy a military contingent but just to send a few counter-drug specialists on a short assignment abroad," said Margelov.

Meanwhile, Karzai asked his defense and interior ministers to conduct a thorough investigation of the incident and report their findings. The New York Times explained the Afghan president’s outburst by "the sensitivity of Russian participation in any armed activity here, even something as widely supported as a war on drugs…The Soviet Union occupied Afghanistan for a decade starting in 1979, and many current Afghan leaders fought them, eventually forcing the Soviets to leave. Afghans widely viewed Russia and its people as enemies."

However, a source in the Afghan government assured Kommersant that Hamid Karzai’s criticism is not directed at Russia: "His harsh statement and accusations were intended for the United States and NATO."