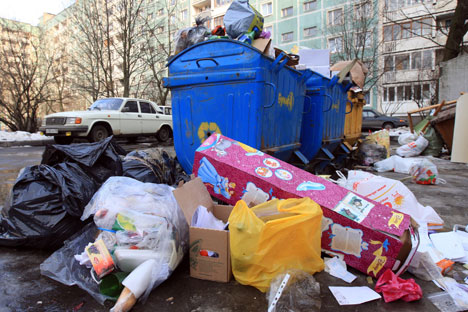 I have a friend who believes that places that are regularly cleaned up just prompts people to litter more, either out of joy that it is clean or out of spite to make it dirty again. He believes that saving a tree by gathering waste paper would be a disaster, because an tree that is left to grow will eventually get old, come crashing down and rot, thus adding to all the debris in the forest. Not only does he shy away from picking up garbage or collecting waste paper, but he also tries to give some theoretical basis to his argument.

Russia does not have too many people like my friend. Most people are happy to see a nice, clean park, and they wouldn’t dream of littering themselves, but they also would not dream of picking up a beer can that a careless teenager had just thrown on the ground. Most people will not bother to recycle waste paper, but at the same time they are nostalgic for the Soviet practice of swapping it for books unavailable in stores. Nowadays, Russian stores offer anything one could ever think of, but you would be hard pressed to find a place to recycle your waste paper; and it is even more difficult to find a place that would pay you for it. An American friend sent me a list of products and services he can purchase using the points he earned by collecting household waste separately. In Russia, however, this is something one could only dream of, and without any real reason to be optimistic at that.

There are cases, however, when people (with a few exceptions) come and collect garbage for free, separate it and then hand it over for recycling. In August, a group of 30 people gathered 200 bags of garbage in a small area in Moscow’s Bitsevesky Park. Half of it was collected separately. Is 200 bags a lot? No, rather it is just enough to cover the transportation and recycling costs. This is the bare minimum to keep separate waste collection profitable. In some countries, this is part of state policy, but in Russia, this is left to the sheer enthusiasm of volunteers.

Volunteers do not usually think about how long the area will remain clean after they leave; they just cannot stand leaving with lots of filth. They offer local residents and passers-by the opportunity join them without being obtrusive. They respect other people’s choices. I heard about a boy who helped clean up the park and said that his fellow classmates wanted to join in, but their parents did not let them. Alas, in today’s Russia, children are the ones who teach their parents to respect the environment, but it does not always help.

On Oct. 10, like many other countries, Russia held a Global Day of Doing. In 14 locations throughout Moscow, including nine parks, garbage was cleaned up and waste paper was collected from local residents. Other participating cities included St. Petersburg, Volgograd, Vladimir, Tomsk, Bryansk, Togliatti, Obninsk, Irkutsk, Angarsk, Smolensk, Nizhny Novgorod and Kovrov.

For the first time in my life, I pasted up notices (it would have been nice if they had been made from recycled paper, but this was not the case, unfortunately) and handed out leaflets to people by the metro with information on where and when they can bring their waste paper for recycling. Some turned away, some sneered, but many people took the leaflets and said thank you. I handed out some 50 leaflets, and not a single one of them was given to someone who was not interested. Hopefully, these people will not take their waste paper to the dump now – or at least, not because they don’t know how else to dispose of it.