Small investors offered a bite of the Russian cherry 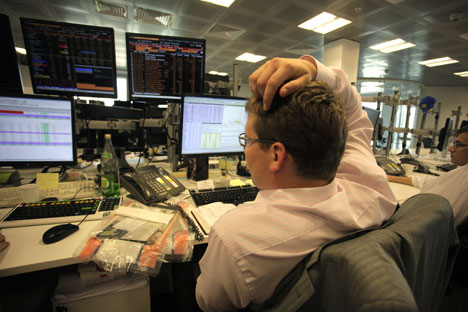 Emerging markets are hot, but it has been very difficult for small investors to get exposure to their fast, volatile growth. That is changing, however, as Russia’s leading investment banks are setting up a string of funds that offer western standards of protection to small investors wanting to take a chance on the “wild east.”

Russia’s stock market is usually either one of the three best performing markets in the world – or one of the worst. Until now, these markets have been the preserve of institutional investors with a high appetite for risk, but the appeal has broadened as the market recovers.

“Sentiment has changed. Clients are calling us again asking about Russia, and we’ve been seeing significant fund flows over the past three weeks,” said Vladimir Savov, head of research at Otkritie Financial.

What is new is Russian fund managers are now specifically targeting retail investors in the west. The new funds are UCTIS (Undertakings for Collective Investment in Transferable Securities), a classification that was established in 1985 by the European Union and offers investors an extremely high degree of investor protection, making them especially suitable for small investors.

The Stockholm-based East Capital is the granddaddy of Eastern Europe’s UCTIS retail funds. The company set up its flagship Russian fund in the spring of 1998, and today has about half a million investors with a total of $7.3 billion under management. As little as $32 will buy a piece of the action, and the fund is sold in 14 countries via a long list of partners that includes banks, insurance companies, and independent financial advisor networks.

“It is clear that the appetite for emerging Europe is back, as inflows have been picking up,” said Karine Hirn, one of the co-founders of East Capital. “Having an exposure to emerging markets used to be only reserved to those few with higher risk appetite but it‘s becoming a must now in most investors’ portfolios because of the somewhat gloomy future for Western capital markets and economies.”

The latest entrant to the game is Renaissance Asset Management (RAM), which launched a family of funds in October that cover Emerging Europe and Africa. RAM is part of the Renaissance Group that includes Renaissance Capital, a veteran Russian investment bank, founded by New Zealander Steven Jennings.

Among the vehicles are two emerging Europe funds that invest into Russia and its neighbors, while a Russian debt fund is also planned. All RAM’s funds have the UCTIS stamp of approval, and the company is in the process of getting “passports” for each western European country. Most of the funds will go on sale to retail investors in 2011, although they’re already available to institutional investors.

“The emerging markets—and especially Eastern Europe and Africa—are coming of age and we are the start of next super cycle,” said Plamen Monovski, CIO of RAM. “The markets are volatile, but even in the worst non-crisis year, the poorest performance was a gain of 20 percent; and there were only two crises in the last 13 years.”

At the same time, Russian mutual fund pioneer Troika Dialog is expanding its reach, and has launched several new funds targeting retail investors worldwide. The investment bank hopes to get UCTIS certification by the end of the year.

Troika launched its first Russian mutual fund in 1997, and remains by far the biggest domestic fund manager in Russia. “One of the things that we have learned from the crisis is diversification is good, especially geographic diversification of investors,” said Anton Rakhmanov, the head of Troika’s asset management division.

Troika launched a BRIC fund in October that will invest into stocks in all four of the leading emerging markets and it already has a family of funds that invest into Russian stocks, bonds, utilities, infrastructure and small cap companies, all of which will be converted to UCTIS by January.