Russia and the future of the CTBT 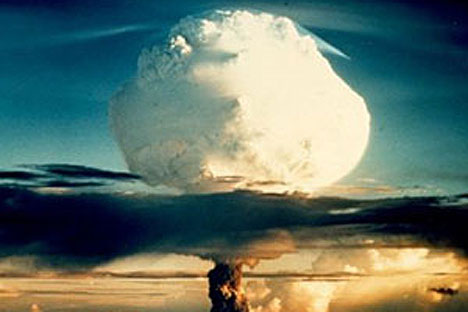 Fifteen years have passed since Russia and the United States approved the Comprehensive Test Ban Treaty (CTBT), but experts have shown little interest in the anniversary.

Fifteen years after it was adopted, the treaty’s future remains uncertain, as does Russia’s participation in the test ban regime. Russia’s successful test of the Bulava sea-based ballistic missile on October 29 made it clear that Moscow intends to continue modernizing its strategic nuclear forces.

The history of the nuclear test ban stretches back to the mid-1950s, when the idea was proposed by India and the USSR. Later, the Soviet Union, Britain and the United States signed the Partial Test Ban Treaty (1963), Threshold Test Ban Treaty (1974), and Peaceful Nuclear Explosion Treaty (1976). From 1977 to 1980, these three powers held trilateral talks on a comprehensive test ban. However, these talks did not yield an agreement. Soviet experts had concerns about U.S. supremacy in the electronic simulation of nuclear explosions and the behavior of fissile material in nuclear warheads, while American analysts worried about the Soviet supremacy in conventional armed forces.

But as testing technology changed in the 1980s, so too did the political landscape. This decade saw rapid development in the field of electronic simulation of nuclear explosions, progress on hydronuclear and subcritical tests, and improvements in “zero-yield” experiment technology. Experts spoke about the possibility of developing nuclear weapons without nuclear testing. But skeptics argued that electronic testing dealt only with caliber and weight, not the technical design of nuclear warhead.

The logic of the non-proliferation regime also paved the way for a test ban treaty. The Nuclear Non-Proliferation Treaty (NPT) made it compulsory for legal nuclear powers “to focus on limiting the arms race and complete nuclear disarmament.” But the NPT (1968) was restricted to only 30 years. Non-nuclear states agreed to extend the treaty only if the “nuclear five” fulfilled their disarmament obligations.

International groups of scientists have been advocating for a nuclear test ban since the early 1980s. In 1985, the idea was supported by Soviet Deputy Foreign Minister Grigory Kornienko and General Secretary Assistant on Foreign Affairs Anatoly Chernyaev. In the U.S., Secretary of Defense Caspar Weinberger and his assistant Richard Perle opposed it. But President Ronald Reagan and Secretary of State George Shultz supported the idea of cutting nuclear arsenals, because the small strategic nuclear forces theoretically could be more vulnerable for a space-based missile defense system (the Strategic Defense Initiative). In the summer of 1986, the USSR and the United States began the Geneva talks on nuclear testing.

The Geneva talks were quite complicated. Joint Soviet-U.S. experiments at Nevada nuclear test sites and Semipalatinsk (1988-89) proved that it was possible to monitor nuclear tests. Both the USSR and the United States declared a moratorium on nuclear tests several times, only to renege. Only in 1990 did the United States ratify the Threshold Test Ban Treaty and Peaceful Nuclear Explosion Treaty.

In 1980s, Soviet and American experts talked about the declining psychological impact of nuclear deterrence and the possibility of replacing nuclear weapons with something that can actually be used. The idea was that by banning nuclear tests, nuclear powers would lose their technological base to build nuclear weapons. But were nuclear powers motivated by humanistic considerations or a desire to revive the possibility of wars using conventional weapons (just as the ban on the use of chemical weapons in 1925 led to the rise of tank warfare in the Second World War)?

The end of the Cold War standoff accelerated the search for compromise. In Vancouver (April 1993), presidents Boris Yeltsin and Bill Clinton agreed to start negotiations on signing the CTBT in a multilateral format. The negotiation of this treaty was to be a package with the Fissile Material Cut-Off Treaty (FMCT). In January 1994, negotiations on both documents began in Geneva.

The Russian-U.S. compromise was not easy. The Clinton administration insisted on banning subcritical and hydronuclear tests, which rankled the Russian Ministry of Defense and Ministry of Atomic Energy. It was only at the New York summit (October 23, 1995) that Bill Clinton and Boris Yeltsin finally agreed that the core of the treaty would be the “zero yield concept.” The text of the treaty was ready to be signed in Geneva on September 24, 1996.

Russia and the United States without nuclear testing

However, Russia ratified the CTBT under certain conditions. These were: (1) the possibility of implementing a federal program to support nuclear weapons without nuclear testing; (2) the option of withdrawal in the event of a threat to national interests; (3) the separation of national and international mechanisms for IAEA monitoring over fissile materials; and (4) the non-deployment of nuclear weapons on the territory of new NATO members. The latter condition was recorded in the Russian-NATO Founding Act (1997).

These conditions soured Republicans in the U.S. Congress on the CTBT. They viewed the New York agreement as an unjustified concession to Russia. (If nuclear testing had been completely banned, Washington would have had an advantage given its superiority in electronic nuclear testing). Russian conditions for ratifying the CTBT were considered excessive by Republicans, who portrayed the New York agreement in the media as Clinton’s “nuclear Munich.” In October 1999, the Republican Congress predictably voted against ratification.

Participation in the Comprehensive Nuclear-Test-Ban Treaty

Russia’s participation in the CTBT was largely criticized by military experts. However, ratification of the CTBT benefitted the Russian Federation in many ways. For example, many non-nuclear states supported Moscow’s position. It gave Russia leverage to persuade the United States to continue negotiations on START and ABM. When the United States criticized Russia for its diplomatic position on the nuclear programs of Iran, India and North Korea, Russia responded that Americans had not yet ratified one of the pillars of the non-proliferation regime. This approach has paid dividends. Public opinion surveys around have revealed that Washington, not Moscow, started a new arms race.

The situation changed after President Barack Obama called for the ratification of the CTBT in April 2009. The CTBT establishes an International Monitoring System for nuclear tests (IMS), which includes seismic stations, as well as radionuclide, infrasound and hydroacoustic monitoring. These stations are located in the states subject to the CTBT. But all the data is to be sent to the Provisional Technical Secretariat in Vienna, which is subordinate to the CTBT Organization. In this respect, the United States is in a better position than Russia for several reasons.

First, Washington has a network of these stations on the territory of its military allies: NATO, Japan and Middle Eastern countries. The Americans can use these stations to monitor Russian sites. Russia, by contrast, does not have similar stations near the U.S. border.

Second, the United States is currently working toward a global missile defense system. IMS stations, which are being built now, seem to be unfit for observing the launches of ballistic missiles. But in 1996, the CTBT participants discussed the draft of a satellite monitoring system for underground nuclear explosions. Space surveillance systems are easier to use than “dual use” technologies: they could be observing not only the nuclear tests, but the nuclear sites, too.
Third, Americans will be able to use the issue of subcritical and hydronuclear tests against Russia. In 2003, American experts claimed that under the cover of Russia’s federal program to support nuclear weapons with testing, Moscow was pursuing a program of subcritical nuclear tests. If the United States decides to ratify the CTBT, similar charges (whether justified or not) could become official.

Fourth, the United States is conducting experiments to develop “small nuclear weapons.” Future administrations (for example, if a Republican takes back the White House in 2012) could increase funding for these projects. Over the past 15 years, significant progress has been made in subcritical and hydronuclear testing. The question, then, is whether the Russian segment of the IMS will be able to give absolutely accurate information about the American experiments.

If the Republicans win control of the House of Representatives on November 2, they may solve these problems, as they are likely to postpone ratification of the CTBT once again. But Russia cannot remain the only nuclear power to have both ratified the CTBT and imposed a moratorium on nuclear testing. The United States and China have great latitude with respect to nuclear experiments. Like Britain and France, they have not imposed a moratorium on nuclear tests and, theoretically, are free to carry out a program of subcritical and hydronuclear testing. In fact, Britain could do this under a joint program with Washington.

There is another problem. In 2008, the Provisional Technical Secretariat in Vienna decided to start using the IMS facilities. It is expected that they will be fully operational after 2015. But unless the CTBT is ratified, the purpose of this system is unclear. Russia will have to amend the agreement with the Preparatory Commission (1997) and the Technical Secretariat of the CTBT (2000).
In the mid-2000s, Russian experts proposed some scenarios for a possible collapse of the CTBT:

(1) large-scale modernization of the U.S., Russian, and Chinese nuclear arsenals;
(2) China, France and, possibly, Britain may have concerns about their inability to maintain their nuclear arsenals at the level necessary to preserve the nuclear status quo;
(3) Russia’s withdrawal from the CTBT in order to support programs to modernize Russia’s strategic nuclear forces;
(4) one of the threshold states or non-legal nuclear states (India, Pakistan, North Korea) conducts nuclear tests.

A Republican victory, of course, would not spell immediate collapse. But if the treaty has not been in force for fifteen years, it is difficult for Russia to be the only nuclear power which complies with its terms and conditions in full. Russia’s official position is to support the CTBT’s entry into force. However, Russian experts tend to focus on the pessimistic scenarios of CTBT collapse. In the near future, Russia could face a difficult choice between the political dividends the CTBT affords and the military necessity to upgrade its nuclear capabilities.