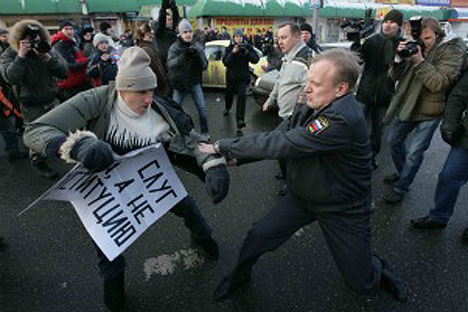 It is a tradition that has usually brought together more journalists than participants: the illegal gatherings of the Russian opposition on Moscow’s Triumphalnaya Square on the 31st of the month. The date references Article 31 of the Russian Constitution, which guarantees freedom of assembly. Strictly forbidden under former Mayor Yury Luzhkov, the meetings raised the profile of opposition leaders, who were usually hauled away by the riot police. But times have changed. Luzhkov, dismissed by President Dmitry Medvedev, was replaced by Sergei Sobyanin. As a way to stand out from his disgraced predecessor, the new mayor authorized the meeting that occurred on Oct. 31.

Lyudmila Alexeyeva, a notable human rights defender in Russia and president of the Moscow Helsinki Group, welcomed the green light from the mayor for a meeting that, after tough negotiations, allowed for no more than 800 participants.

Eduard Limonov, leader of the National Bolshevik Party, however, caused a feud within the opposition when he refused any compromise with the authorities and demanded that 1,500 people be allowed to come to the protest. Alexeyeva called his actions "unnecessary."

This schism led to a rather unusual situation: not one, but two meetings, one allowed and the other not, were held last Sunday evening on Triumphalnaya Square. Under control and carefully counted, the "authorized" protesters flocked peacefully, while the others, led by Limonov supporters activists, came together at the other end of the square. Police batons were quick to rain down on those "outside-the-law," and some people were arrested.

"This (authorized) event is our common success," said Alexeyeva, nevertheless. She organized the gathering jointly with like-minded NGOs Memorial and For Human Rights.

Boris Nemtsov, a former deputy prime minister and a member of liberal opposition group Solidarnost, has meanwhile called on demonstrators to "march on the Kremlin on Dec. 31."

But Sobyanin is practicing equal opportunity when authorizing demonstrations. City Hall said it authorized a march of Russian nationalists on the outskirts of Moscow scheduled for Nov. 4, the National Day of Unity. This gathering of Orthodox fundamentalists, skinheads, and supporters of the Movement Against Illegal Immigration (DPNI) was also previously banned by the Moscow city government. DPNI leader Aleksandr Belov promised to bring together 10,000 people for the occasion.