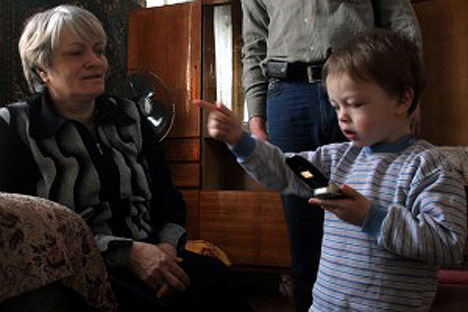 While mobile phone users across the globe are rushing out in droves to buy the iPhone, Russian mobile phone companies think they can carve a niche in the global mobile market with a phone aimed at people who want to keep things simple. The Babushka phone is aimed at elderly phone users who don't want the latest apps, but instead are looking for a phone that is easy to use and handle.

In Russian, babushka means grandmother, and these cheap phones without any special gadgets or additional functions are just ideal for the elderly who find new fancy instruments befuddling.

“Older men and women often find it difficult to get used to modern multi-functional mobile phones with many excessive (in their view) functions,” said Mikhail Nikolayev, president of Orbita Telecom, which manufactures the Just5 phone in Russia. "Nor are they happy with the tendency towards a smaller size, as their eyes are not as good as those of young customers."

Simple to operate, the Just5 phone comes equipped with big keys, a large screen, a powerful speaker, sensitive microphone and an emergency key. It is ideal not just for senior citizens, but also for children, the disabled, and emergency services personnel.

Clearly, babushka phones and iPhones have different target audiences, said Maksim Nogotkov, president of Svyaznoy Group, one of Russia’s leading mobile phone retailers. Those buying iPhones are image-conscious; they want to check their email and go online. And those buying cheap phones just want to call and send text messages.

While babushka phones currently form just 1 percent of the market according to Smartmarketing, sales have jumped tenfold over the year. “Since the end of last year, we have already sold several dozen thousand such phones (closer to 100,000)," said Nikolayev.

MegaFon, one of Russia’s top three mobile operators, joined the game in August 2010, launching a phone with large keys. Orbita Telecom is already selling phones in more than 30 countries in Western Europe, the United States, Canada, and almost all of Latin America. Mobile market experts see babushka phones as a sign of market maturity.