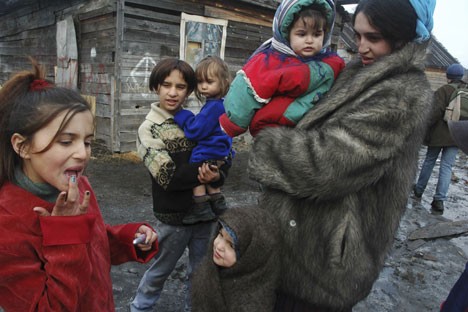 “I’m going to say it: The problem with the Roma is that there aren’t two of them who work,” said a young Russian police officer on a visit to the Roma village of Possiolok Gorodishy, about 150 km from Moscow. With his leather jacket and uniform, close-cropped blond hair and light-colored eyes, he looks amused as he gives a piece of his mind to Georgiy Shekin, a.k.a. Yalush in Romani, who works for the interregional Russian Roma rights network, and to Gendar, the village elder.

Gendar stands up for his community, whistling between his missing teeth while the police officer carries on: “Roma don’t have any education, they don’t find ways of working nowadays.”

Gendar is the baro, the village “elder.” This camp in the Vladimir region is home to Roma from the Koldiary ethnic group, one of the groups that has best preserved its customs; they were all nomadic until 1956 when the Soviet Union forcibly settled the Roma. The Koldiary, who came from Eastern Europe, were traditionally horse traders or metal workers. After the fall of communism, some adapted by opening successful central heating businesses. But here in this village, no one has had any success to speak of. “We don’t do anything during the day. We stand around and wait for it to end.” A dozen young men wearing leather jackets and dark clothing stand with their hands in their pockets. The railroad tracks lie behind them. The tracks run through the camp, whose houses stand in a typically Russian row along the main street.

“Those with a car occasionally go and bring back what’s needed to feed the family,” Gendar said. “But how does someone with no car do it? Bah, he steals; it’s simple, for the children.”

We go into Gendar’s house. “Everything nice here comes from communism. Back then, there were no poor and no wealthy,” he said regretfully. “When we didn’t have work, we would go on unemployment benefits.” The walls are hung with the splendors of the Soviet era, pink and yellow curtains and shawls with bursts of flowers that cover the chairs. The mother, half-lying on the sofa in a blue outfit, smokes with a thin smile on her face. “You want to see my niece’s wedding film?” she asked.

There are an estimated 180,000-400,000 Roma in Russia. The major problems they face include drugs, poverty, problems adjusting to the modern economy as well as difficulties handing down their language and culture

A pretty 15-year-old girl with a bouncing orange skirt and copper medals that jingle stays in the periphery even as she brings in tea, butter and marinated mushrooms. “Ah no, that’s right, we don’t have any more electricity.”

The inactivity and lack of work for the Roma is due largely to their non-integration in the urban and competitive modern economy, along with the fact that in Russia, they are no longer a nomadic population. In communist times, certain groups of Roma, especially the “Russka Roma,” those who sang for the nobility under the tsar and who are the most integrated even today, specialized in a niche market: contraband. There wasn’t much in the way of merchandise at the time. It was an illegal activity, but not criminal. “But after perestroika, all the groups in Russia started going into trade and the Roma, often illiterate, couldn’t keep up,” said Marianna Seslavinskaya, one of the directors of Roma Union, the Russian interregional Roma rights union.

Seslavinskaya and her husband, Georgiy Tsvetkov, make Roma education an absolute priority, provided that it involves Roma culture. Both work in a research laboratory at the Federal Institute of Educational Development in Moscow, but their work is underfunded: Seslavinskaya and Tsvetkov provide services to the entire country and there are an estimated 180,000-400,000 Roma across the Russian Federation. “We don’t have an allocated region, contrary to most Russian minorities. As a result, no one funds the passing down of the culture. The Roma children who go to school at age six learn Russian, whereas they speak Romani.” In 1927, authorities set up a learning program for the Roma, but Stalin abolished it in 1938.

“What is needed,” Seslavinskaya said, “is a program that would start to teach the Roma their language and, afterwards, Russian culture. Because a Roma who loses his culture doesn’t necessarily become Russian. He is marginalized. Educating Roma by saving their identity is the only solution that will allow them to adapt to the contemporary world. In order to be able to find work without getting bogged down in identity issues, or falling into poverty and crime.”