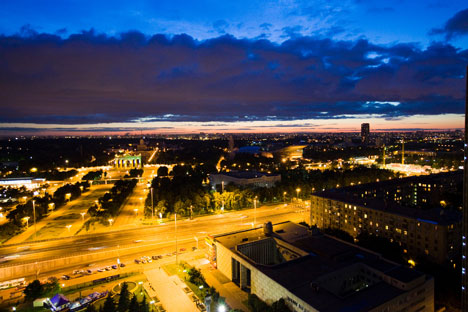 If you want to meet a ghost and chat with spirits, you don’t need to travel to Transylvania. Just take a walk around Moscow, which has an arsenal of nerve-tingling myths and blood-chilling legends, and enjoys a reputation as one of Europe’s most mysterious and strange cities.

We began our ghost trip with Moscow’s central street, Tverskaya, where a black cat is said to appear at midnight. Skeptics say that it is not a ghost but an ordinary stray cat, of which there are a great many in Moscow, and it is only natural that the animal chooses nighttime for its promenade: The street is not so busy at night. Critics also say there must be several black cats, not just one.

We asked people on the street whether they had seen the ghost cat. Local residents confirmed that the cat does, indeed, exist, appearing at midnight, walking around and then disappearing into thin air. This ghostly inhabitant of Tverskaya Street is known not just in Moscow, but also far beyond Russia’s borders: it is mentioned in Britain’s Encyclopaedia of Ghosts and Spirits. According to another story, this ghost was the prototype for Begemot, a character in Mikhail Bulgakov’s The Master and Margarita. Reportedly, the writer was once returning home late at night and saw a big black cat strolling along the street and then disappearing in front of his very eyes.

This is just one of many cat stories. One resident of Tverskaya Street told us that a whole family of ghost cats haunts the area near the Novokuznetskaya metro station. Once, late at night, he saw several semi-transparent cats and kittens emerge from the wall of a building, cross the street and disappear into the wall of the building opposite. We decided to check this information on the Internet and did, indeed, find stories about the same cats. According to one posting, those cats were harmless even for dogs, but if you get in their way, you will certainly lose consciousness.

Meanwhile, the legendary black cat of Tverskaya Street is not the only fantastic creature mentioned in Russian literature. In Anatoly Rybakov’s Bronze Bird, a popular children’s book in Soviet times, one character speaks of the Golyginskaya Gat (“gat” means a log road across a swampy area). “If they wander on to the Golyginskaya Gat, they might get lost there forever,” says local villager Zherdyai about visiting pioneers. He goes on to tell about the ghosts of an old count and his son, who were beheaded there “before Napoleon’s time.”

In fact, Prince Ivan Khovansky was a rich and powerful courtier in the late 17th century. He planned a coup to bring down the Romanov dynasty and take the throne himself. But the conspiracy failed, and Khovansky was executed together with his eldest son, Andrei. They were beheaded and their bodies thrown onto the log road crossing the swampy forest near the Vorya River close to the village of Golygino. This was a way to show extreme contempt: buried in unconsecrated land, their souls were doomed to eternal suffering. So the restless, maltreated souls of father and son rise from the swamps at night and ask passers-by to bury their remains as befits Christians, insisting they were just innocent victims of malignant libel. If an unlucky man so approached cannot utter an intelligible response, the princes grow even more pressing, coming closer and removing their own heads, to be polite!

Back in Moscow, we went from Tverskaya to Kuznetsky Most.

In the 19th century, Kuznetsky Most Street was a thriving centre of fashion and nightlife with many boutiques and gambling houses. Gamblers often played all night long, losing all their cash. As the legend goes, those hit particularly hard might even be considering suicide when they suddenly saw a grey coach with wonderful horses stopping in front of them. The coachman, hiding his face, was ready to take them “wherever your soul wishes” for very little money. Few were able to grasp the covert sense of the phrase, indeed, they had just considered taking their own lives. Those who got into the mysterious coach were never seen again.

Another strange place is Myasnitskaya Street, where, before the revolution, there stood a small house inhabited by an elderly couple called the Kysovnikovys. They were known for their wealth and incredible greed. They were extremely thrifty, never visiting anyone and never receiving guests, never going out and not even giving alms to the poor. The pair guarded their money with great vigil. Fearing robbers at night, they would put their money trunk into a coach and drive around Moscow until dawn.

Once they had to leave their home for a while. The couple hid all their treasures in the caretaker’s house, deciding that the thieves would not look there. When they came back, they peeped into the caretaker’s room and saw a fire in the stove, which the servant, unaware, had lit at the site of their cache. All the banknotes and securities in which the Kusovnikovys kept their capital were gone.

Unable to withstand this blow, the old woman died on the spot and her husband went mad, roaming along Myasnitskaya Street, muttering: “Oh, my money, my money…” According to some eyewitnesses, the ghost still haunts the same street at night, stopping passers-by and telling them his sad story.

There are even older ghosts in Moscow. On Gospitalny Val Street, near Baumanskaya metro station, there is an old cemetery dating from the 18th century. In 1771, the city suffered an outbreak of the plague, which took its toll on Muscovites, forcing them to expand their cemeteries: there was not enough land even for locals, but the city also had a German Quarter, which had to bury its dead, too. A special cemetery for foreigners was laid out on the steep banks of the Sinichka River, which flowed through the city. This is where many German, French and Polish soldiers were laid to rest. People say melancholy flute music is sometimes heard from the dark cemetery park on spring nights and, when it rains, an invisible musician plays his sad music until dawn, accompanied by the rattling of iron shackles heard from the tomb of Dr. Fedor Gaaz. Locals call this cemetery “Infidels’ crypts.”

From the Bauman district we proceeded to VDNKh metro station, where the famous Ostankino TV Tower is located. The strong electromagnetic radiation from many aerials makes this one of the city’s least healthy districts, but this is not what attracted us. There is a macabre story explaining the origin of the name Ostankino, deriving from “ostanki,” or “remains” in Russian. Several centuries ago, this place was considered impure, and it was here that suicides and witches were buried. Since 1558, a hunchback old woman with a crook has haunted these lands, appearing to residents of Ostankino village shortly before their deaths.

As the legend goes, she even predicted to Emperor Paul I that he would not live until spring. Her prophesy came true: the tsar was murdered by officers of his guard in the early hours of March 12, 1801. The same old woman told Alexander II that he would die at the hands of an atheist — and this prediction also came true when he was assassinated by a terrorist on March 1, 1881. It is rumored that the old prophetess also appeared to local residents before the Ostankino TV Tower fire in 2000.

Another sinister place is the house at 28/1 Malaya Nikitskaya Street, near Barrikadnaya metro station, which belonged to Stalin’s henchman Lavrenty Beria, the notorious General Commissioner of State Security. A unique phantom inhabits the corner of Malaya Nikitskaya Street and Vspolny Alley: No one has ever seen it; it can only be heard. On a quiet night, if you listen carefully, you will hear the sound of an approaching car. It differs from the sound of modern cars and it is like that of the old ZIL limousine that Lavrenty Beria used to drive. The car stops outside the porch, the door slams, steps are heard, and the passenger discusses something with his driver in a low voice. Some also say they have heard groans from tortured “enemies of the people,” but such reports seem to be a product of the imagination: Beria never interrogated or tortured anyone at his home. As for women’s voices, they can well be heard, as many women visited his apartment, some against their will.

Another haunted place is the road between Lyubertsy and Lytkarino. This road has a bad reputation among drivers — and for good reason: it crosses an ancient cemetery dating from the 10-11th centuries. According to one theory, images of the dead appear before passing cars, causing serious accidents. From 1990 to 2002 alone, nine wreaths were laid along the 1.5 km road to commemorate those who had died in accidents there. The road was dubbed “Death Road” owing to the high number of accidents. There are several “death roads,” but it is this road from Lyubertsy to Lytarkino that is considered to be the worst.

There are many haunted places and ghosts in Moscow and the Moscow Region. For those keen on ghosts and spirits, special guided tours are offered. These are pretty serious things, however, and trips to some of the places mentioned above can have a bad ending. So the safest way to satisfy your curiosity is to read ghost stories, surf the Internet and use your imagination.