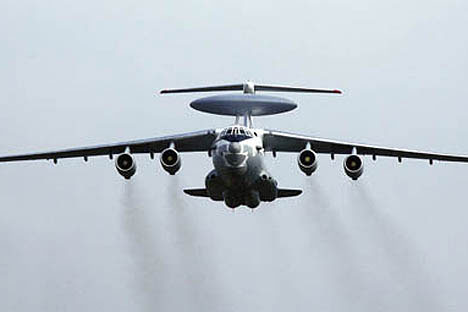 India ordered three A-50EI variants, developed on the basis of the Russian Il-76MD military transport plane and fitted with the Israeli-made Phalcon radar system, in 2004. The first two aircraft are already in service with the Indian air force (IAF).

"We have finished retrofitting a third transport plane for special tasks, and sent it to Israel in October to be fitted with electronic equipment for future delivery to India," a spokesman for the Taganrog-based Beriyev aircraft center said.

In many aspects, the A-50 is comparable to the E-3 Sentry of the U.S. Air Force. It is fitted with an aerial refueling system and electronic warfare equipment, and can detect targets up to 400 km (250 miles) away.
According to the Indian media, the IAF could order two more A-50 planes from Russia and Israel in the future.

In addition to the Russian A-50 aircraft, India has purchased eight Boeing P-81 long-range maritime reconnaissance (LRMR) aircraft from the United States, and signed a deal with Brazil to jointly integrate domestically developed AWACS systems onto three Brazilian-made Embraer-145 aircraft to be later commissioned with the Indian air force.