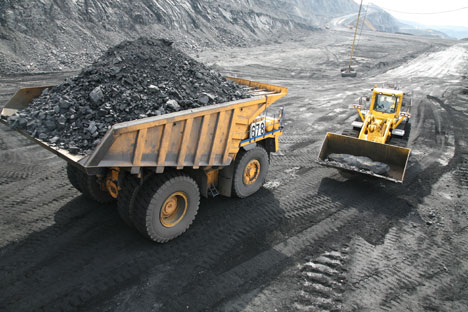 At the moment, supplying coal for domestic consumptionin Russia is even more attractive for producersthan exporting it. Source: Kommersant

Two years ago, the world's largest steel producer ArcelorMittal, owned by Lakshmi Mittal, a UK-based Indian, acquired three coal mines and associated assets in the Kuznetsk Basin from Russian steel giant Severstal. In 2009, the Russian mines of ArcelorMittal, which became the first foreign company to enter the Russian coal market through acquisitions, produced 1.9 million tonnes of coal. The $720 million deal and the success of ArcelorMittal has ignited a renewed Indian interest in the Russian coal industry.

The relatively high economic growth rate in India despite the global crisis and the expanding demand for infrastructure and power generation has ensured an insatiable demand for coal. But coal output has not kept the pace, creating a supply-demand gap of about 60 million tonnes per annum.

Experts believe that in the next five years, there will be an “explosive growth” in Indian coal imports. Due to the demand from power stations, metallurgical and cement plants, coal consumption in India may reach two billion tonnes by 2030, says India’s Coal Minister Sriprakash Jaiswal.

Currently, India extracts 530 million tonnes and imports approximately 67 million tonnes of coal. According to Jaiswal, the national coal reserves are estimated at 277 billion tonnes. Coal accounts for 53% of the energy capacity; and the government believes that coal will remain the country’s main source of energy in the future despite ambitious plans for nuclear power generation in which Russia is also a partner.

Kolmar comprises several operating coal mines and mines under development, including Erel strip mine with an annual capacity of 450,000 tonnes, Dezhnevskaya mine (under development), Yakutskie Ugli – Novye Tekhnologii (licenses for two plots) and Neryungriugol, which owns the Denisovskaya mine (estimated capacity: 750,000 tonnes per annum). In 2005, Evraz Group, along with its Japanese partner Mitsui, attempted to develop Denisovskaya, but the joint venture broke up in 2007 because of coal accessibility issues. Kolmar’s total reserves amount to 400 million tonnes of coking coals of K, Zh and GZh grades. Intergeo bought Kolmar in April. The estimated value of the deal was $300 million.

If the deal with NMDC falls through, Intergeo will continue developing the company on its own, Finsky said. He added that in this scenario, Kolmar would announce an IPO and use the stock market to attract partners, with whom a preliminary agreement has been struck. The company plans to increase its coal output to 6.5 million tonnes in 2013. Denisovskaya mine will be up and running next year at full capacity. Vostochny will start producing coal, and Inaglinskaya mine will come on line with 2.8m tonnes in capacity.

If Intergeo fixed the Kolmar price early this year when coal cost $180–190 per ton, now is the right time to sell, because coal prices have gone up by 23%, says Nikolai Sosnovsky, an Uralsib analyst. Boris Krasnozhenov of Renaissance Capital believes that at $400 million, it would be an easy sell, i.e. $1 per ton of reserves is a reasonable price. The price tag could be even higher, Sosnovsky says, because Indian metallurgists lacking sufficient coal supply might offer a good premium for the mines.

Even if Kolmar does not sell, it is unlikely that it will be a deadweight on Intergeo’s balance sheet. Under the best case scenario, coking coal prices will grow by 20–25% next year compared to the average 2010 price, says Krasnozhenov. Steel producers directly or indirectly control over 60% of coking coal production. Mechel is one of the main players in the segment, with a quarter of the market. Evraz, controlled by Chelsea Football Club owner Roman Abramovich, and steel giant Severstal, owned by Sergei Mordashev share another 10% of the market.

There are two segments in the Russian coal market: coking and power-generating coals. Russian coking coal is a favourite among the BRIC countries, because the markets of three out of four members (Brazil, China and India) have a structural deficit due to a lack of hard coking coal.

Self-sufficiency is the Russian coal market’s idiosyncrasy, setting it apart from the other BRIC economies. Russian coal demand is completely satisfied by domestic production. Moreover, Russia supplies coal to 45 different countries of the world. China and India, for example, import coal mostly from Australia and South Africa under long-term contracts, with the price reviewed on an annual basis, says TKB Capital analyst Evgeny Ryabkov. The Russian market is characterised by more flexible pricing and frequent changes that sometimes create tension as consumers believe that coal is overpriced.

In past few months, coal prices in Russia are steadily rising: since September, they have gone up by almost 80%.

The key factor in the upward trend has been the recent recovery of the global economy and the consequent demand growth in the metallurgical industry in the world, including in Russia. At the moment, supplying coal for domestic consumption is even more attractive for producers than exporting it, because coal has lost almost 20% of its value in the global market over the past few months.