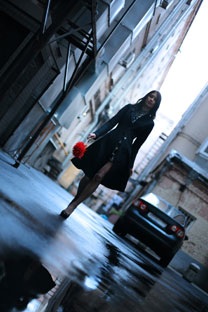 Recently RBTH ran a story on fashion mistakes expats make in Russia. While I agreed with the advice given, I kept waiting for one of the tips to be “get rid of everything in your closet that isn’t black.” I admit that I did not move to Moscow from a big international city, so perhaps the monochromatic color scheme wouldn’t have been such a shock to me if I had come from New York or London. But I know that I came to Russia with a variety of colors in my closet and left with one.

Part of the logic behind the black clothes is that they don’t show dirt as much as lighter colors. However, the special mix of melted ice, ice-melting chemicals and mud everyone trails around from November to May, known as gryaz, has a special quality. On khaki pants, it indeed shows up as black spots; on black pants, however, it shows up khaki. And fabric can only absorb so much gryaz. I once had to give away a perfectly good ankle-length, microfiber, imported-from-the-U.S. winter coat because there was a permanently faded spot in the center of the back right above my shoes. It was the place where my boots kicked up mud and after four winters it would not come clean. However, this was no excuse to the numerous older women who stopped me on the street to tell me that my coat was dirty and therefore I looked like some person who didn’t have enough manners to keep my clothes in better shape. (For you Russian speakers, the word they used was nekulturny).

Of course, official Washington has its own uniform, but for most of us living in this city that doubles as a tourist attraction, pretty much anything goes. I, however, have found it hard to break my Moscow clothing habit. Even my gym clothes are black. I just don’t feel comfortable in anything else. I once told a U.S. co-worker who commented on my color choice that I wore black because it made me less noticeable. Only later did I consider that only works if everyone else is also wearing black.

My first winter in DC I had to trade in my ankle-length microfiber parka for a knee-length cloth coat. After much consideration, I found one I absolutely loved. It was red. It goes well over the black.