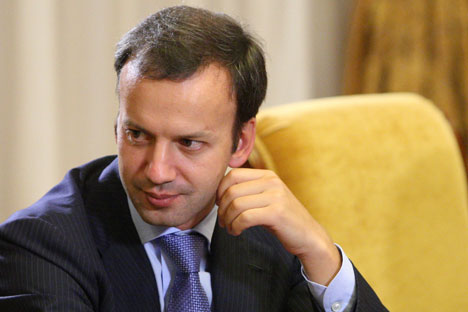 At a press conference on Monday at RIA Novosti, Arkady Dvorkovich, economic advisor to Russian President Dmitry Medvedev gave some insight into Russia’s agenda at this week’s G20 summit in Seoul, South Korea. According to Dvorkovich, Russia shares the International Monetary Fund’s opinion that some countries’ expectations for economic growth in 2011 are overstated. Moreover, the Kremlin supports China and other states in their criticism of the U.S. Federal Reserve System for refusing to coordinate its decisions with other G20 members. A partial return to the gold standard and including the Chinese yuan as a global currency will also be on the summit agenda.

Because of recent decisions by the U.S. Federal Reserve’s Federal Open Market Committee, the G20 summit will focus on the continuation of the “currency wars.” On Nov. 2, the committee decided to purchase a further $600 billion of longer-term treasury securities; this will increase its holding by 20 percent while simultaneously reducing the monthly purchases of securities from projected $100 billion to $75 billion. Under this arrangement, U.S. issuing banks will de-facto buy more securities, while Federal Reserve banks will acquire treasury securities in exchange for $25 billion dollars’ worth of treasury-backed mortgage securities a month. The U.S. national debt monetization program will be completed in June 2011 and could indirectly affect the level of inflation in the U.S. economy.

Dvorkovich said that the Federal Reserve’s decision could result only in Russia receiving an insignificant inflow of capital. In reaction to this move, Russia is insisting that it should be absolutely necessary for G20 member states to inform their counterparts of any such decisions in advance. However, such consultations are technically very complicated: Like most central banks, the U.S. Federal Reserve, is officially independent of the government on such issues.

“We hold any country’s monetary policy to be a matter of sovereign interests, and we would not tolerate any interference in our monetary policy should any attempts be made to do so. I think, nevertheless, that the Russian president will insist on holding preliminary consultations with key players in the global economy before any of such steps are taken,” Dvorkovich said.

Dvorkovich also confirmed that Russia believes the expectations of some G20 countries for economic growth in 2011 and further on are overrated. He said that the IMF has already seen some forecasts falling out of line with the general consensus. Dvorkovich believes that these forecasts are overrated and if they do not come true, it could bring about a new wave of instability in the world financial markets in 2011. “There will be serious talks about it,” he said.

Apart from discussing coordination, Russia is also going to propose an initiative for preventing oil spills in offshore production, Dvorkovich said. He did not, however, explain what is behind the initiative. The Russian Ministry of Natural Resources published an agenda for action at the national level in October, but it did not include any revolutionary plan in this area. Dvorkovich did say, nevertheless, that the energy-related items on the agenda will be more extensive: A proposal will be made for G20 members to discuss “energy subsidies” and “volatility in the energy markets.” This is also part of the macroeconomic agenda. Most analysts believe that the “qualitative easing” policy in the United States in the mid-term will lead to a growth of global investment in the financial sector of the oil market and could cause a new surge in oil prices, which, naturally, Russia does not see negatively.

Another issue on the G20 agenda will be further consultations on the global currency system reforms, which Russia supports. Dvorkovich said that a discussion needs to be had about a new agreement on the world financial market that would replace the Bretton Woods Agreements. In particular, Dvorkovich said that the Russian Federation supports the idea of several world reserve currencies be pinned to each other with floating rates; one of these currencies should be the Chinese yuan.

Moreover, a Russian presidential representative has for the first time officially supported a proposal to talk about returning the world financial system to a partial gold standard. Dvorkovich said that, in his opinion, gold can be used as a “stabilizing asset” for the world’s main reserve currencies. Since 1976 the IMF has operated under the Jamaica Agreement, which provides for relatively free floatation of the world’s reserve currencies and withdrawal of gold as security for the U.S. dollar, the world’s main reserve currency. The Russian Central Bank, together with the Russian Government, holds one of the five largest gold reserves in the world, which it has been increasing even further over the past few months.