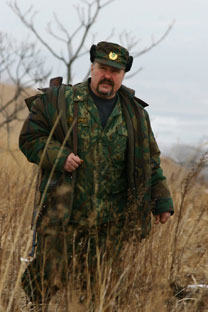 According to the Chinese calendar, 2010 is the Year of the Tiger, which made it uniquely appropriate for the World Wildlife Fund to award its highest honor this year to a man who has spent his career protecting Amur tigers in the Russian Far East. Anatoly Belov, the head of two nature preserves in Russia’s vast Primorsky Region was awarded the 2010 WWF Duke of Edinburgh Conservation medal at a special ceremony in Windsor Castle on Nov. 1.

In awarding the medal to Belov, Prince Philip, the Duke of Edinburgh, cited the ranger’s “tireless work, crucial in the effort to save the species from extinction.” Unlike other countries, which have witnessed a rapid decrease in their tiger populations, the number of tigers in the Russian Far East has grown under from around 50 tigers in 1960 to around 500 today. However, despite the tireless efforts of devoted gamekeepers, who comb boundless forests searching for poachers, snares and illegal traffickers, a survey last year by the U.S.-based Wildlife Conservation Society showed that the number of tigers in Russia decreasing, likely due to increased poaching.

The fight against traffickers and poachers in the Russian Far East is a serious one, and Belov does not consider himself an exceptional member of the team that battles illegal activity in the nature preserves. During a press conference in Moscow after his return from the UK, Belov said that he did not feel comfortable accepting the award alone.

I was nominated for this award. But I am not alone. There is a team of people working with me: my fellow inspectors, border guards, policemen. We are working together,” Belov said.

Many members of Belov’s team are army veterans, whose experience in military campaigns in Chechnya and Afghanistan prepared them for their current challenges. And the challenges of life as a ranger are not limited to the severe climate and terrain. Recent reforms aimed at combining all environmental
agencies into one have increased the bureaucratic duties of rangers; additionally, many poachers enjoy the support of local officials, who profit from illegal hunting. Lack of money is also a constant problem. Funding from local and federal authorities must be supplemented by NGOs such as WWF, which provide equipment, uniforms and other necessities to forest rangers.

Belov recieved the WWF's highest honor last month in a ceremony in the UK. Source: WWF

Despite these trials, the rangers are making headway in the fight against poaching. Last year, 240 people were arrested for illegal activities in the two nature preserves for which Belov is responsible along with Russia-China border. But not all of them were arrested for acts against endangered wildlife. Belov admits that difficult conditions in the region sometimes push people towards crime. Many locals heat their homes by cutting down trees in the nature preserves and others hunt in the areas for food. The law requires a license for cutting timber, hunting and fishing, but most people ignore the law in order to avoid the bureaucracy involved in getting such a license. Belov and his fellow rangers have to investigate each case individually in order to separate these cases from cases of poaching endangered tigers and leopards. “If we arrested everyone involved in illegal activities in the forest, half of the locals would be behind bars,” said Belov.

Belov admits that receiving the WWF award is big honor for him, but what he really cares about effectively carrying out his job of securing the forests. At 48, Belov, has spent most of his life in the nature preserves of the Far East and does not feel comfortable wearing suits and participating in official ceremonies. After 22 years in the forest, the 650 square miles of unique landscape that he protects is where he belongs; the fight against traffickers and poachers will not wait.

“If we manage to save this territory for our children it will be a priceless heritage,” Belov said. “As for now, the results of our work are obvious.”

The WWF has adopted the motto “Tigers are roaring for help,” to draw attention to the plight of the world’s endangered big cats. The organization recently launched a major educational and sponsorship program for tigers, ROAR, and is also backing the Global Tiger Summit scheduled for the end of November in St. Petersburg. Representatives of the 13 nations with tiger populations will meet with scientists and environmental activists in the hopes of developing an action plan to save the endangered animals. The meeting is backed by the World Bank, and organizers hope the plans that come out of the meeting will result in the doubling of the tiger population by 2022, the next Year of the Tiger.