Russia and NATO: A marriage of convenience 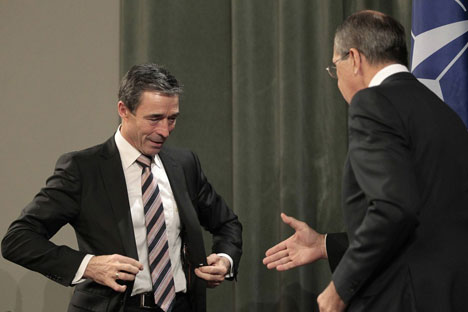 The Russia-NATO Summit scheduled for Nov. 20 in may well set a record for the number of documents it is expected to endorse. The main commercial outcome of the meeting in the Portuguese capital will be an agreement between Moscow and NATO on the return transit of military cargoes from Afghanistan via Russia, which promises tens of millions of dollars in monthly budget revenues for the Kremlin. Another key political document – the common assessment of risks and threats – should take the parties to a level of cooperation that can only exist between allies.

The last Russia-NATO summit, held in Bucharest in the spring of 2008 when Vladimir Putin was still the Russian president, ended with hard feelings on both sides. Moscow was struggling to prevent Ukraine and Georgia from being put on the NATO Membership Action Plans that they had been promised. In August of that same year the war in South Ossetia broke out, which drove both sides so wide apart that there were no full-scale meetings of the Russia-NATO Council for almost a year.

Anders Fogh Rasmussen, a Dane, who last year succeeded the Dutchman Jaap de Hoop Scheffer as NATO’s secretary general, promised to set things right. So far he has been doing well enough. Rasmussen’s first success was to get Russian President Dmitry Medvedev to agree to a Russia-NATO summit in Lisbon, the first one in two years. Last week, the secretary general visited Moscow to discuss the agenda for the meeting with Medvedev.

Russian and NATO diplomats are meeting in Brussels for the last round of talks ahead of the summit to put the finishing touches on the key political document: the common assessment of risks and threats. The 25-page review, described by Russian diplomats as “very dense,” divides the threats into five sections: international terrorism, Afghanistan, piracy, vital infrastructure protection and non-proliferation of weapons of mass destruction, including missile technology. People familiar with the document said that the drafters of the documents had analyzed all the existing terrorist organizations, assessed the Afghan drug threat, studied methods for protecting cities, chemical and nuclear facilities and discussed “comprehensive ways to combat piracy in Somalia.”

Moscow and NATO saw eye-to-eye on all points except the missile threats. The problem is that NATO negotiators still agree with the Americans on this issue because they are sure that Iranian missiles are a threat, sources at the Russian Foreign Ministry say. Both NATO and the United States maintain that this is reason enough for deploying an anti-ballistic missile defense system in Europe, but Russia disagrees.

“As regards to ABMs in Europe, or a NATO anti-ballistic missile defense system, we do not yet know what decisions will be made in Lisbon,” Russia’s Deputy Foreign Minister Sergei Ryabkov said. “We expect that a decision to start building the system will be made there.” Moscow, he added, is “wondering against whom and what all this is being put in place. Who does Europe have to defend itself from with such a powerful and modern umbrella? In our opinion, there are no missile risks and challenges that would warrant the creation of such a system. We and NATO have long ago ceased to be enemies, and besides, we do not have medium- and short-range missiles, since they were all liquidated under the Medium- and Short-Range Missile Treaty. They say that this is meant to counter the Iranian threat. Do we know for sure that Iran is going to use these missiles to attack Europe?” asked Ryabkov. He believes that there is no doubt in Russia that the U.S. and NATO experts are exaggerating this nuclear threat.

An attempt to bridge the gap between Russia and NATO on missile threats will be made at the talks in Brussels. Taking part will be Anatoly Antonov, the head of the Russian Foreign Ministry’s security and disarmament department who was the chief negotiator during the preparation of the new Russian-American Strategic Offensive Reductions Treaty. But even if a compromise is not reached, the summit will approve the review with the two parties stating their differing positions on missile risks. After being approved, the document will be marked “for internal use” and will be the basis for a joint plan on countering the threats. “That is the first step. The review merely answers the question of who is to blame, and we will then decide where do we go from there,” a diplomatic source told Kommersant.

Another result of the summit will be a new agreement between Moscow and NATO on military transit, or to be more exact, return transit of NATO’s military cargoes from Afghanistan via Russia. A high-ranking Russian Foreign Ministry official said that an agreement on the issue can be considered to have been reached, and the summit will just put a legal stamp on it. “Land transit to Afghanistan is already taking place, and after the summit, transit in the opposite direction will begin, and that would mean an agreement with the Alliance as a whole. Internal state procedures are still yet to be agreed upon, which is being done at present,” the diplomat said.

Russia’s ambassador to NATO, Dmitry Rogozin, has confirmed that negotiations on return transit are underway. Moscow thinks it stands to gain commercially from the transit agreement, especially because NATO is planning to start withdrawing international security assistance forces in Afghanistan beginning next year. “The start of this process will increase transit needs. We are talking about tens of thousands of rail containers every month. The price of carrying one container across Russian territory is $1,800,” said a source at the Russian Foreign Ministry. Thus, even the most conservative calculations show that Russia will earn tens of millions of dollars a month.

Russian diplomats do not rule out the possibility that the Lisbon meeting will clarify the so-called helicopter package issue. For over a year now Russia and NATO have been negotiating a purchase of 21 military Mi-17 helicopters for the Afghan army, but a deal has yet to be signed. The Pentagon then said it would buy the machines for Afghanistan through a tender. While NATO was urging Moscow to provide three helicopters for free, the United States is going to pay for their delivery. “We had a tentative agreement with NATO, but it has failed to raise the money. Their problem is that of the 28 NATO member countries, only five meet their military budget contribution commitments, so eventually the Americans took it upon themselves to make up for the difference,” said a Russian diplomat who is familiar with the negotiations. “If the deal goes ahead, we may start thinking how NATO can pitch in to service the helicopters.”