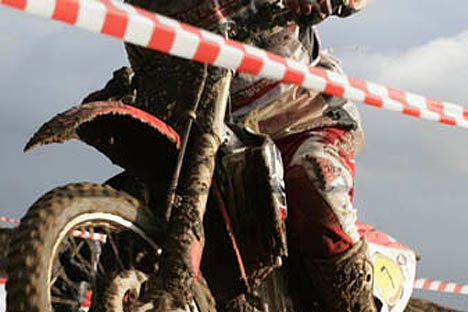 All photos by Anisia

Motocross traces its origins as a sport in its own right to early 20th century Britain, where it emerged soon after the motorbike was invented. The idea was to race on rugged terrain, with the first racer to cross the finish line claiming the title.

A spectacular sport, МХ, as motocross came to be called, was growing in popularity worldwide, and the Soviet Union at the time was no exception: motocross ever since 1928 was being vigorously developed, and the Soviet national team won numerous top awards at championships, including the Motocross of Nations.

Unfortunately, the collapse of the USSR and an end to public funding has thrown the Soviet school of motocross into disarray. Racers have been forced to pay their own way, which far from everyone could afford. A decent racer would normally trash two or three bikes a year, on top of other expenses such as protection gear, travel to competitions, gas, spare parts, and tires.

In the West, a whole industry has emerged around motocross, which is not just a sport, but also an unforgettable show featuring high speed, jumps, and fierce competition… Motocross events draw tens of thousands of spectators, special interest magazines and books enjoy huge print runs, and movies are made.

Russia, of course, can only dream of this for now. Recent years, nevertheless, have brought some positive changes, including the emergence of professional teams with official sponsorship deals. A new generation of Russian racers has demonstrated a totally different level of skills. Perhaps motocross will soon become as popular in Russia as it is elsewhere.

The end of the 2010 season brought two pleasant surprises to Russian moto sports fans. The first was the final stage of the XSR-MOTO.RU Country Cross 2010 Cup that was held as a beach race in the Krasnodar region. A four-kilometre track was laid right along a strip of sand hugging the Black Sea coast. Fifteen trucks hauled off loads of debris from the beach after a tornado hit the area the week before.

A second unconventional track was built in the town of Zheleznodorozhny in the Moscow region for the finals of the IRONMAN 2010 series. A totally flat field was transformed in a matter of days with artificial jumps, log obstacles, used tires, and sand bumps. The organisers describe their efforts as an attempt to introduce supercross elements into the race.