Medvedev can learn from Obama’s errors 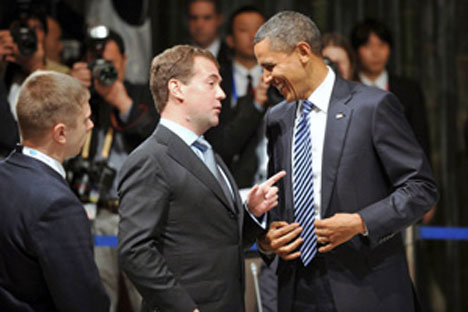 Moscow is worried over what the Republican revanche in Congress might mean for the “reset” in U.S.-Russian relations. The concern is not limited to foreign policy. President Dmitry Medvedev’s domestic political standing could be adversely affected if the reset goes south.

The noticeable improvement in U.S.-Russian relations under Obama has turned into a political asset for Medvedev, who can point to few other foreign or domestic policy successes during his first term in office. The partnership with Obama has strengthened Medvedev’s claim to be a real president and to be a candidate for a second presidential term in the eyes of the Russian elite.

Here, Medvedev risks committing the cardinal sin of a Russian ruler — trying to convert international adoration into a domestic political legitimacy that would compensate for failed policies at home.

There are other lessons for Medvedev to learn from Obama’s failures — above all, choosing priorities. Obama misjudged the public’s tolerance for big government. He focused on the long-term priorities, pushing through a complicated health-care and financial oversight reform, while the U.S. public, reeling from the recession, was hoping that Obama could deliver quickly on jobs.

Medvedev seems to be heading this way with Skolkovo with his calls for modernization that few Russians can relate to. His recent hint at pursuing political modernization before economic modernization makes a positive impact on people’s lives could be a fatal lapse of judgment.

Another lesson is of political style. Obama came across as an aloof and self-absorbed president who could not “feel voters’ pain.” “Obama is seen as the leader of an elitist, intellectual class that is out of touch with the mainstream,” a Washington insider recently told me.

Medvedev appears bent on imitating Obama’s worst stylistic faults: a cerebral, detached president surrounded by arrogant advisers with iPads who are convinced that their policies would be good for the people — someday. Increasingly, Medvedev comes across as the leader of an elitist and liberal intellectual class that is out of touch with the rest of the country.

Medvedev is lucky that he doesn’t need to worry about midterm elections. Obama lessons could come in handy in 2012.