A new path from London to Moscow 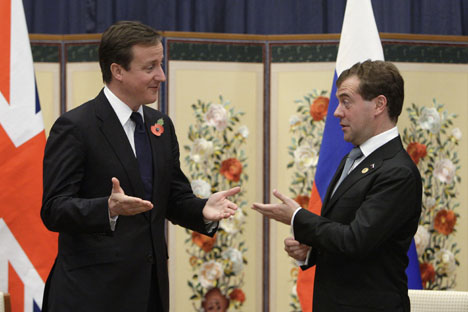 Russian President Dmitry Medvedev held bilateral talks with British Prime Minister David Cameron on Nov. 12 on the sidelines of the G20 summit in Seoul. Following the negotiations, the two leaders that they would meet one-on-one next year at what will be the first full-fledged Russian-UK summit in over five years. Moreover, London has already prepared an agenda for the summit, which includes a dedicated program of cooperation on modernization and conveniently omits any reference to human rights or the rule of law.

Medvedev spent the better part of Nov. 12 at three bilateral meetings, and while his talks with Chinese leader Hu Jintao and new Australian Prime Minister Julia Gillard brought few, if any, surprises, the meeting with Cameron turned out to be a breakthrough. As journalists looked on, Medvedev invited the British prime minister to come to Russia on an official visit next year, an invitation Cameron graciously accepted.

This proposed meeting will be the first bilateral summit between Moscow and London have agreed on a bilateral summit in over five years. Since that time, the leadership in both countries has changed. While the Labour Party was in power in the UK, Russian-UK relations deteriorated significantly: London refused to honor Moscow’s requests to extradite Akhmed Zakayev and Boris Berezovsky; there was the mysterious murder of political émigré Alexander Litvinenko, the expulsion of Russian diplomats from the UK, a conflict among TNK-BP shareholders, and finally, a fight over Russia’s invasion of Georgia. Moreover, under Tony Blair and his successor Gordon Brown, London never missed a chance to criticize the Kremlin for democracy setbacks and human rights violations.

Since Cameron came to power, however, the tone of the relationship has changed markedly. “While it’s too early to talk about beginning to press the reset button in Russian-British relations, Cameron and his cabinet have made it clear to us from the start that they are ready to rebuild relations,” said a source with the Russian delegation to the G20. The meeting between the Russian president and the British prime minister at the G20 summit in Toronto last June was the first positive signal. The new British Foreign Secretary William Hague then visited Moscow in early October, meeting not only with his Russian counterpart, Sergei Lavrov, but also Dmitry Medvedev himself. It was at that point that London shared its vision for a new relationship with Moscow, said a British diplomat, adding that Cameron elaborated on the subject in a letter he recently sent to Medvedev, in which he wrote that the UK is ready to foster relations with Russia by building on the accumulated positives and not focusing on the negatives, such as the Litvinenko affair or the situation in Georgia. According to sources in the presidential administration, this letter was somewhat similar in tone to a message U.S. President Barack Obama sent to Medvedev shortly following Obama’s inauguration. That letter signaled the pushing of the reset button in U.S.-Russian relations.

The new British Cabinet has decided to put its money where its mouth is: A source in the Russian government said that, taking a cue from Medvedev’s modernization idea, London recently proposed to Moscow the establishment of a separate Russian-British cooperation program in this field. “The British call their project “Knowledge Partnership;” it covers five areas: the economy and modernization, innovation, high technology, investments, and education,” said the source.

Notably, President of the European Commission José Manuel Barroso offered Russia a similar programme, called Partnership for Modernisation, last year. The offer has been made on behalf of the entire EU, of which the UK is a member. The British, however, have chosen to entice Moscow with a bilateral programme of their own. While the EU version flogs democracy and the rule of law as indispensable, like air, for Russia to successfully modernise, the British draft contains no mention at all of these subjects, which are a nuisance to Moscow. “The new Cabinet is full of true pragmatics who are not going to dwell on things that tend to lead us into an impasse,” a Russian diplomat noted.

According to another source in the presidential administration, Cameron and his team demonstrated exactly that kind of pragmatism at the G20 meeting, carefully avoiding any mention “of the Litvinenko affair or any other sore points.” A lot of attention was paid instead to the Kremlin’s pet project, modernization: Prime Minister Cameron told President Medvedev that British companies are eager to participate in the Skolkovo project, an idea the Russian leader enthusiastically endorsed.