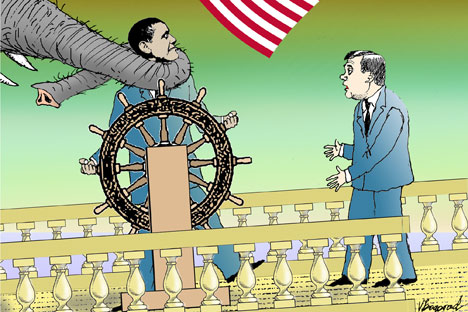 As Russia and the United States try to move forward with the “reset” of their bilateral relations, there has been a fundamental “reset” of the legislative branch of the U.S. government. President Barack Obama described the results of the midterm elections, during which the House of Representatives and a third of the Senate were elected, as a “shellacking” of the Democrats. In the U.S., this word usually refers to a resounding sporting victory, describing triumphs on the baseball, basketball or American football field. The Democrats lost 64 places in the House of Representatives, and seven in the Senate. They also lost the majority in 16 state legislative assemblies. But the question here is not the extent to which these results will be felt at home, where the Republican and Democrat teams are competing, but how they will impact on the international stage, where Russia and the U.S. are two key players. In particular, this concerns the effect the election results will have in volatile regions like the Caucasus, where competition between Russia and America is at its fiercest.

For Russia, the Caucasus is a place of strategic significance since the many conflicts in this part of former Soviet Union have repercussions in domestic politics. The conflict between Georgia and South Ossetia is connected with the conflict between North Ossetia and Ingushetia, the situation in Abkhazia is linked with the problems of the Russian Federation’s Adyghe-speaking regions, and Dagestan shares the growing problem of Islamic extremism with its neighbor, Azerbaijan. Unlike the Russian Federation, the U.S. is not directly concerned by the problems in the Caucasus. In Washington, the Caucasus is not as pressing as issue as Latin America, for example, which is regarded as a priority, and the Caucasus comes lower on the agenda than the Middle East, which the U.S. sees as a threat to its foreign policy. However, the Caucasus could be important to the U.S. for its future dealings with Iran and Turkey, for security on the Black Sea and the Caspian, and as a “strategic zone” for conducting operations in Afghanistan. What worries the U.S. most are the unresolved conflicts, which Washington sees as the Kremlin’s means of achieving political domination in the CIS. The U.S. considers this domination dangerous, seeing it as a precursor to a consolidation of authoritarian rule within Russia. The U.S. viewed the 5-day war with Georgia in 2008 as Russia setting a precedent of using force, rather than diplomacy, to redraw the borders between the former Soviet republics. Considering that a large part of U.S. foreign policy is decided in Congress and not just in the White House, the 2010 midterm elections are important for the future development of Russian-American relations as a whole, and in particular for the direction they will take in the Caucasus.

On one hand there are grounds for concern, starting with the fact that the Republicans owe part of their success to criticisms of Obama’s foreign policy. One of these was aimed at the way Obama dealt with the Caucasus, where he was criticized for giving in to Russia. Ariel Cohen, a top analyst at The Heritage Foundation, a conservative think tank allied with the Republicans, in his evaluation of the current administration’s foreign policy, said: “Obama’s Administration is so attentive to Moscow’s complaints that the U.S. has stopped providing Georgia with even the most elementary defensive weaponry.” The pro-Republican media claims Obama takes a neutral stance on the occupation of Georgia and Russia’s victory in the Caucasus in August 2008. The Caucasus issue has made Moscow’s attitude toward the Republicans somewhat ambiguous. The “five-day war” occurred when the George W. Bush was still in the White House and the war in South Ossetia occurred right at the peak of presidential election campaign, when the Republican presidential candidate John McCain, voiced harsh criticisms of Moscow. As a result the Russian government began to tread carefully around this aspect of American politics. In August 2008, McCain announced: “we are all Georgians now, and today there are noticeably more of his allies in Congress. Over the past two years, when the Democrats were in charge, the love these Republicans had for Russia did not increase, and neither did their sympathy with Georgia decrease. Now, with the results of the Nov. 2 elections, the White House and the State Department will be obliged to react in one way or another. Therefore President Obama and his team will start adopting certain slogans and ideas of the opposition and make use of certain arguments for neutralising criticism. Thus in an interview on “Radio Svoboda” soon after the election, Philip Gordon, the Deputy U.S. Secretary of State for European and Eurasian Affairs evaluated Russia’s actions in August 2008 extremely harshly, calling it “the occupation of a sovereign state.”

But there are also factors at the other end of the scales. The Democrats may return to power in Congress in 2012. For example, the Republican’s resounding victory in the 1994 midterm elections was followed by the re-election of Bill Clinton and a resurgence of Democratic power in 1996, which allowed Clinton to carry out his foreign policy. Obama’s party lost in 2010, but it retains a strong position in the Senate. Moreover Obama still has executive power, so priorities such as the “reset” of Russian-American relations won’t simply be deleted from the current agenda. In addition, American tradition requires that branches of the administration should be prepared to compromise and come to a general national consensus if they are in disagreement. This will put an end to the most militant members of the opposition, who are becoming pro-Georgian as a political move.

Back in the Caucasus, Moscow and Washington have certain goals in common, such as bringing the situation in Nagorno-Karabakh under control, and the stabilization of Armenia and Turkey. The Republicans certainly have nothing against these two processes. Even in 2008, Republican Washington welcomed the new Maindorf Declaration on Karabakh, which was signed thanks to the efforts of President Dmitry Medvedev. Secondly, the United States does not dismiss the Caucasus as a problem for Moscow to deal with on its own. For the U.S., it is the delicate balance between Armenia and Azerbaijan that has become an issue due to protracted disagreement among different lobbies within Congress, and the need to choose between historical justice and pragmatism, (for example, the questions surrounding the Armenian genocide). So Washington must occasionally look beyond Russia to get to the root of problems in the Caucasus.

Moscow is also important to Washington in the context of its foreign policy agendas in Iran and Afghanistan. These priorities are just as important to the Republicans, whose recent victory does not have to become a worry for Russia, as they understand that Russia could be helpful in resolving the issues that are important for the U.S., and they also understand the importance which the Caucasus has for Russia. It is hard to imagine that the Republicans, who are generally regarded as more conservative and pro-military, will oppose a partnership between the U.S. and the Russian Federation in the fight against Islamic terrorism in the North Caucasus.

Thus the elections of Nov. 2, 2010 should not be regarded as the end of the world or a relapse of Russia -American relations to the low point of August 2008. Discussions within the American political class will become increasingly heated and the relationship will indeed become more complicated. But if both sides adopt a rational approach and refuse to be swayed by fierce ideological pressure, then the situation could take a turn for the better. After all the Berlin wall came down when a Republican was in the White House.

Sergei Markedonov is a Visiting Fellow at the Center for Strategic and International Studies in Washington, DC