American venture capital on the Volga 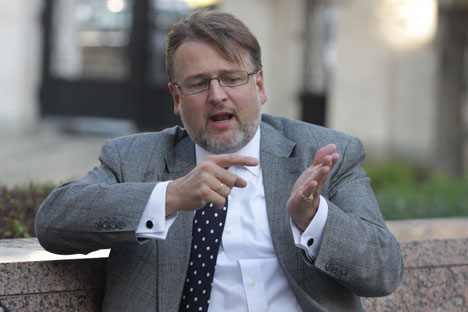 Kendrick White came to Nizhny Novgorod to do business in 1991Source: Anton Churochkin

There are only a few handfuls of Americans who really have a sense of what it will take to bring innovation to the Russian business landscape and what holds Russian innovation back, and Kendrick White is among them. In 1991, he abandoned his successful career in the American subsidiary of ABN Amro Group and came to Russia, settling east of Moscow in Nizhny Novgorod.

Asked “What impedes innovation in Russia?” he replied: “Habits: it is very difficult to persuade Russian businessmen that they need investors’ help to develop their businesses. This is a multilayered problem. For the initial stage, when there is just a bare business idea, Russia lacks people who can translate ideas into business plans and effectively present these business plans to investors. There are many universities with many bright students, but they lack the knowledge of how to develop their ideas.”

Gov. Arnold Shwarzenegger's visit to Russia last month with representatives from Google, Microsoft and Oracle, represented a reservoir of hope and goodwill. The governor called President Dmitry Medvedev a "great visionary" and said Russia was a "gold mine of opportunity" while the Kremlin continued to push its development of the Skolkovo innovation city.

No one knows this more that White, a Russia veteran who is cautiously optimistic.

“There are almost no people in Russia who would be prepared to invest in projects in the initial stage,” White said. “For the huge country, there are just 10 to 15 angel investor clubs, up to 10 people in each of them, at the most. This is nothing compared to the United States, where we have 270,000 such clubs, with total annual investment worth $30 billion.”

He said that there has been progress, however. "The president and the government are not just speaking of innovations, but they are also creating the necessary infrastructure to support them. Perhaps some new institution is needed to carry out independent expert examination in universities, selecting interesting projects. The Skolkovo project is very promising, but only if it is modeled on Silicon Valley. In the United States, you can see a millionaire investor sitting in the company of university students. Skolkovo needs the same kind of openness,” White said.

It is very difficult to persuade Russian company owners to invest in innovation, White said. Many owners, who often act as general directors of their businesses, cannot imagine any outsiders joining the capital of their company, and they cannot grasp why they should cede some control over their interests. “The problem is that people in charge of large plants, especially in the regions, often cannot understand the reason behind investing in innovation since their companies already monopolize the respective markets. They don’t see any point in modernizing to enhance their competitiveness, as there is no competition as such. And these people are taken by surprise when transnational corporations come to regional markets. If this happens, it is too late, the market is already lost,” he said.

Innovation in Russia is informal, he concluded: "If you take two guys from Nizhny Novgorod and give them a software assignment, they will lock themselves up in a room, smoke like chimneys and stop shaving for days, but when they finally emerge, you will get a much deeper solution than you could imagine. This creativity should be leveraged. I think Russia’s revenues from the sale of natural resources will be declining, one way or another, and soon we will see the new generation of self-made people emerging in this country."