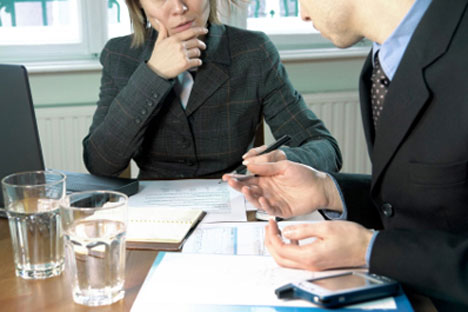 According to the Bloomberg Global Poll published last week, only 10 percent of foreign investors are ready to put their money into the Russian economy. China was chosen by 33 percent of respondents, Brazil by 31 percent and India came third with 29 percent.

A similar negative picture emerged from the World Bank paper “Doing Business 2011”, also published last week. This report, which rated countries’ regulations in nine areas in the life-cycle of a business, puts Russia in 123rd place – down from 116th in 2009 – out of 183 countries.

To obtain the necessary approvals to build a commercial warehouse and connect it to basic services, a modest-sized business in Moscow must go through 53 costly procedures over the course of 540 days.
Getting an electricity connection requires nine procedures, including multiple inspections by various agencies and a permit from the Transport Ministry. The process consumes on average 302 days and costs 47 times Russians’ annual per capita income, the report said. Not surprisingly, Russia figures in the unenviable Top 10 most procedure-bound countries.

Russia’s outdated customs regulations and procedures are another reason why investors continue to view Russia sceptically. The country ranked 162nd in trading across borders, according to the World Bank. A recent report by the Economist Intelligence Unit also gave Russian import procedures bottom marks on volume of paperwork needed, speed of processing and the prevalence of corruption. Only two other countries – Azerbaijan and the Central African Republic – require more paperwork.

Good moves but not enough

Russia has indeed made efforts to improve its investment climate. Entrepreneurs have been freed from having to line up at separate registration agencies. Business start-ups are also easier, thanks to one-stop shops for document processing, according to the World Bank report.

Land use procedures have been eased, and a series of legislative measures to improve creditor rights and the insolvency system were introduced last year. Steps toward the regulation of insolvency administrators and the prevention of fraud and abuse in insolvency proceedings have likewise been undertaken, the report said.

Yet, for all this, the country is still doing too little too slowly to attract investors, experts say.
Most of Medvedev’s reforms, for one thing, have been half-heartedly embraced; others have been stifled by the nation’s infamous bureaucracy. “Despite attempts by President Medvedev to reform the system, the country is so mired in Soviet practices that operators at different levels of government fail to see that their actions create significant hurdles for doing business in the country,” said Anton Kalanov, of audit and consultancy firm Interexpertiza, who contributed to the World Bank report.

The post-Soviet Russian labour code, which borrowed heavily from the Soviet economy, remains a big obstacle for both investors and small-sized businesses in Russia, business experts say, because it is overly employee-friendly. According to Valery Fedoreyev, of the Baker & McKenzie law firm, “an employer – local or foreign – cannot fire a bad employee unless the worker has systematically or consistently violated labour rules” – which has created an avalanche of litigation by workers wanting to be reinstated purportedly for being fired unfairly.

Fedoreyev said Russian politicians have traditionally sided with workers in open labour disputes in order to boost popularity and avert social unrest. Both during and after the financial crisis, which saw many workers lose their jobs, Medvedev called on judges to look carefully into every case of sacking by employers. “The judges mostly interpreted Medvedev’s appeal for caution as government backing for all workers,” Fedoreyev said.

Billionaire Mikhail Prokhorov, who chairs an industrial lobby group, has suggested substituting unlimited-tenure employment contracts with fixed terms, and that the government should introduce commercial and profitability reasons for employee sackings. While some of Prokhorov’s proposals have been widely criticized as “severe and over-the-top” by labour leaders, many labour lawyers believe that Russia’s labour code – which permits an employee to leave a company after just two weeks’ notice and gives him the right to work for a competitor immediately – needs urgent revision.