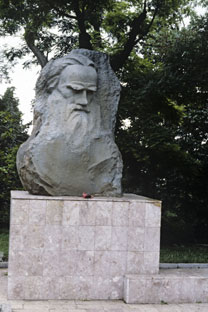 Even during his lifetime, Tolstoy’s fame echoed around the globe, and thousands of people held him to be their spiritual father. He was not pursued by the authorities, and no one would dare to offend the great man. And yet, 10 days before his death, Tolstoy fled his home by coach during the night without a word to a wife or children. He was of sound mind at the time, and even took his attending doctor, but nonetheless his departure was a flight without any goal or direction.

One hundred years have passed, and many people, both in Russia and abroad, have wondered whom or what Tolstoy was fleeing from. What did he want? What did he hope for? Why did he not come back when he was discovered? Why did some of his children and friends help the 82-year-old man arrange this eccentric act?

Dozens of books have been written about Tolstoy’s flight. The last years of Tolstoy’s life were examined in Michael Hoffman’s new film, "The Last Station," which debuted in the United States earlier this year. The film is very well shot, and the actors are great, and yet it offers little insight into the great writer’s drama.

He had been preparing for this flight for his entire life. Even as a young man, Tolstoy loved to go alone to the steppe and remain there for long periods. And following the spiritual crisis he suffered at the age of 50, the idea of withdrawing from the world became one of the main themes of his works. In his book "The Flight from Paradise," published in Moscow this summer, Pavel Basinsky took a different approach, showing Tolstoy’s departure through the perspective of his entire life, which makes this book so special. On its cover we see the back of an old man moving away along an endless widening alley. Basinsky showed how this plan had been nurtured for decades, and yet might not have been implemented.

Tolstoy loved his Yasnaya Polyana estate and his large family, and had a deep respect for his wife, who is often blamed for her husband’s flight. In his book, Basinsky dispels this myth. Indeed, Sofya Andreyevna was unable to understand her great husband in many ways, she was prone to hysterics as she grew old, threatening suicide, and Tolstoy feared that she could prevent his departure or stop him on the way. Yet, all these factors might not have prompted Tolstoy to flee at night at this damp, chilly time of year.

While dispelling many myths, Basinsky’s book does not give a final answer to this question. Written in a simple and clear language (published in Russian with hopes of being published in English), the book plunges readers into Tolstoy’s epoch, offering them the opportunity to judge themselves. Indeed, the great writer himself does not seem to have understood his motives completely. One sees an intricate family and historical drama in which personal motives are intertwined with public and political ones. The book has every chance for success with the American and British audiences, who prefer facts to speculation.