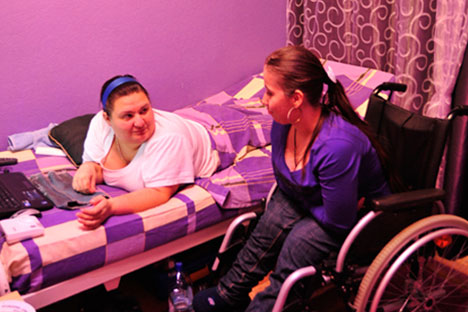 1999-2010
Evelina Matveeva (pictured left in both photos) and Anna Tukbaeva (right) 11 years ago and today: Both girls shared a medical ward. Evelina was paralyzed after being caught in a firefight during the first Chechen War that rocked Russia’s south in the 1990s. Both young women are having some success rebuilding their lives even though they are disabled in Russia.
Photos by Ben Aris

Evelina Matveeva is lying in bed, surfing the Internet on her computer and chatting on the phone in the Moscow apartment she shares with her mother and younger sister. The native of Grozny in Russia's Chechen Republic has spent a lot of time in bed since a bullet tore through her torso, grazed her heart and smashed her spine 15 years ago.

It was January 1995, early on in the first Chechen war. Evelina, then 11 years old, was strolling down the road to her friend’s house. In the next instant she was a child trapped in a firefight between Russian federal forces and Chechen rebels. A stray bullet changed everything for Evelina, who has no control over the lower half of her body and is destined to live the rest of her life in a wheelchair.

Evelina said she was relatively lucky as the Russian soldiers immediately whisked her away by helicopter to the hospital in nearby Mozdok, where doctors spent the next two days trying to save her life. Once out of danger, she and her mother were flown to a specialist hospital in Moscow. It was the beginning of a long process of rehabilitation that will never finish.

There are more than one million disabled children and a dearth of services in Russia. Many children will not make it to adulthood, but Evelina did. She has been rebuilding her shattered life, and her family has settled in Moscow with some help. Joseph Kobson, the Soviet-era crooner and Russia’s answer to Frank Sinatra, came to the family’s rescue, donating $20,000 toward the cost of their apartment. They could never have purchased their four-room place just outside the city limits without his help.

Though she still receives regular treatment at state-run hospitals and goes once a year to a sanatorium for extensive physiotherapy, Evelina finds that the government support is of little assistance day to day. While the state is not yet enforcing its own protections for the disabled, public attitudes are not much better. Russians are extremely polarized on the rights of people with disabilities.

Russian law demands that local authorities provide wheelchair access to any public building or apartment as needed, but Evelina’s family had to build the rough concrete ramp that leads to her front door themselves.

The Russian constitution states that required medical treatment be free of charge. “But when I go to the state-run pharmacy, they just say, ‘We don’t have that medicine’,” said Evelina’s mother, Samantha. “Those bureaucrats just pass papers to each other and we have to buy the medicines from the pharmacy.”

“Things are much better today than they were five years ago, but it is still very difficult,” Evelina added. She recently completed a photography course at a Moscow institute and earns some money on the side making portraits for friends and family. “All the new malls must have wheelchair access, but nothing that was built before does. I couldn’t live anywhere else in Russia except here.”

Money is tight. Samantha is on a pension of $333, an increase from a few years ago. Evelina also has a job at the rehabilitation clinic she used to attend, where she earns another $490 a month. But getting a job outside the disabled community is extremely difficult for the wheelchair-bound, as discrimination is widespread; Evelina’s older brother works as a masseuse at the same clinic and earns twice his sister’s pay.

“In the West, if your legs don’t work then you are considered to be a person whose legs don’t work, but you are still a person,” Evelina said, frustrated by the limits her disability causes. “But here you are just ‘balnoi,’ sick, and can’t do anything.”

Evelina’s best friend, Yulia Bessonova, who is also wheelchair-bound and shared a ward with Evelina as a teenager, put herself through college; she is now qualified to be an English teacher. Bessonova was lucky enough to not only find a job but also a school with an elevator so she can get to her classroom.

Both young women saved enough money to buy cars they converted to hands-only control, which they clearly adore, as it gives them the freedom to move around the city. The other key piece of equipment is a laptop with an Internet connection, without which their education would have been impossible.

Another friend, Anna Tukbaeva, is also from the same ward and has just finished school. Her mother has no car, so she did the bulk of her schooling online at home and even took her final exams online this summer.

“I have to bide my time and see what comes up,” she said. “Really it is up to other people to realize that you can be productive and work even if you are an invalid.”