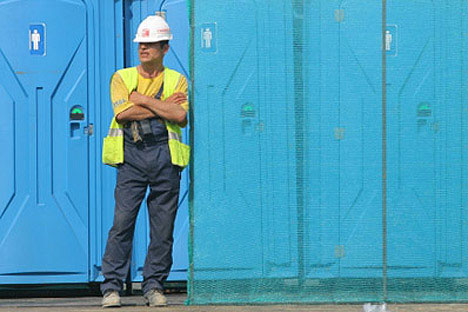 As part of a strategy to boost small and medium-sized business while plugging the growing demographic hole in the working population, 20 million new foreign workers could arrive over the next 10-15 years.

Yet the news comes at a time when there are reports of rising ethnic tension in Russian towns, and threats of lynch mobs driving foreigners from their homes.

What type of foreigner?

As part of a bid to ease tensions, the authorities hope a change in emphasis will help. Instead of relying on low-grade labour from the CIS, the idea is to make Russia a more attractive place for highly-skilled foreigners to come.

Sergei Borisov, president of business research group Opora Rossii (Support of Russia), told a meeting of the Public Chamber: “We’re not just going to rely on anyone. We don’t just want a man with a shovel and a broom.

“The battle is for the so-called ‘creative class’.”

That means highly-skilled experts, entrepreneurs, investors and unqualified workers for whom there is a big demand, Moskovsky Komsomolets reported.

And there will be tempting offers to lure them to Russia, including the right of residency from the day of arrival – something which would not only ease visa-related red tape but would also give migrants the same health care and pension rights as Russian citizens.

Running out of Russians

Federal Migration Service chief Konstantin Romodanovsky, told the meeting: “It’s not about a lot of them – it’s a shortage of us.”

Russia’s current working population is 88.6 million, and in 15 years that is set to fall to 77.1 million.

And the traditional labour flow from the former Soviet Union – especially the central Asian republics – is apparently falling away, prompting a search for a new wave of migrants from India, China and other emerging Asian economies.

This forms a key plank of the FMS’s migration policy up to 2025, which was presented in conjunction with Opora Rossii on Tuesday.

Earlier this year there were other signs that Russia was looking to help skilled workers arrive from abroad to build President Dmitry Medvedev’s prized innovation economy.

“Revolutionary” work permit reforms and the easing of some quota requirements were drawn up to encourage talent to support the Skolkovo “Silicon Valley” planned for Moscow’s outskirts.

But in September it was announced that quotas for foreign workers would be reduced in 2011, with almost 10 per cent fewer foreigners being invited in.

And Moscow’s new mayor Sergei Sobyanin made a point of prioritising jobs for Muscovites on the eve of his appointment last month.

Sobyanin’s populist call to give local jobs to local people has more sinister echoes when it is adopted by Russia’s ultra nationalists.

Groups like Slavyansky Soyuz and the League Against Illegal Immigration have long campaigned on a “Russia for Russians” ticket.

And during the November holiday weekend they claimed to bring 3,000 supporters on to Moscow’s streets for a “Russian March”, bringing the issue of militant Russian nationalism back into the spotlight.