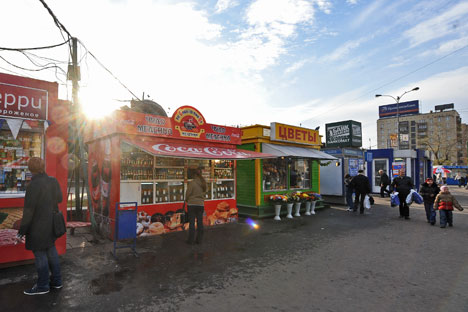 Forty of the 150 Stardog!s hotdog stands dotting Moscow have been shut down over the past week, and another 20 are expected to be closed shortly, said Sergei Rak, director for development with Markon, the private company that runs the Stardog!s chain.

"They demanded the closures on various grounds," Rak said by telephone, referring to City Hall officials. Among the grounds, he said, officials studied Markon's leases for the hotdog stands in hope of finding errors that would justify their cancellation. Finding none, they said bluntly, "Close! At any rate, you are not going to work here anymore," Rak said.

Stardog!s, along with hundreds of other kiosks, has fallen victim to Sobyanin's first major initiative — getting rid of street kiosks and stalls in central Moscow as part of an effort to end traffic jams and beautify the city. But the campaign, which City Hall said led to the razing of 500 kiosks, or 15 percent of the total, last week, has infuriated small business owners, who complain that it contradicts a promise by Sobyanin to support small businesses.

Dhakhangid Guseinuv, an Azeri migrant and father of three, said he was given two days last week to vacate a fruit stand that he had leased for the past seven years near the Ulitsa 1905 Goda metro station. "I will start business somewhere else," he said sadly, adding that the officials who had ordered him to leave had not shown him any documents.

A visit by Sobyanin to the Ulitsa 1905 Goda metro station during an Oct. 30 city tour promoted the kiosk crackdown. Sobyanin complained that the kiosks blocked the view of a historical monument and were located too close to the metro station. The head of the Presnensky district, where the metro station is located, was fired on the spot, together with the head of the central Tverskoi district. The official reason given for the dismissals was that the officials' work contracts expired Nov. 8, RIA-Novosti reported.

A female vendor at one of the few remaining — but closed — kiosks at Ulitsa 1905 Goda said last week that municipal officials had given her an ultimatum. "They told us on Nov. 6 that we had the choice of leaving quietly or being thrown out," she said, refusing to identify herself because of fear of being denied a kiosk permit in the future. She said the electricity was cut to a nearby kiosk and it was immediately closed as the municipal officials talked with the vendors. "Sobyanin wants to show everyone who is the new boss in town," she said.

A written request for comment was submitted receintly to City Hall's consumer market and services department. Called over the next five days, the department's spokeswoman, Yekaterina Shushtanova, promised each time, “I will send you a reply tomorrow.”

Interestingly, Sobyanin, a former deputy prime minister and chief of staff for Prime Minister Vladimir Putin, stressed during his confirmation hearing as mayor in the City Duma that supporting small business would be a priority.

"Small and medium-sized businesses are in need of aid," he said Oct. 21. Referring to bureaucratic barriers for small business startups in Moscow, he said: "We should take them away. Then there will be a completely different investment climate."

Sergei Borisov, head of Opora, the country's largest association of small and medium-sized businesses, accused municipal officials of acting too zealously to close kiosks and harming small businesses and discrediting Sobyanin in the process. He said in a statement that many of the kiosks being closed had all the proper permits to operate and were not being given the two-week eviction notice required by law.

But Vladimir Silkin, prefect for the city's Northern Administrative District, said Saturday that 70 percent of the kiosks in his district were operating on expired permits.

Officials' zeal appears to have led to some excesses, like the continued removal of downtown newsstands that Sobyanin ordered restored on Nov. 9. Moscow residents and media outlets have complained about the disappearance of newsstands, which are now to be allowed 25 meters away from metro stations.

The owner of the Pirozhki Iz Pechi chain of hot-pie kiosks has accused the authorities of breaking the law and has threatened to sue City Hall. "We are under pressure. Local authorities are calling and demanding the removal of kiosks, using insults and blackmail," Andrei Malushin, owner of the chain's parent company, told the Marker business portal last week.

The closures have hit migrant families hard, leaving about 7,000 migrants out of work, said Madzhumder Muhammad Amin, president of the Federation of Migrants of Russia, a public group. "Migrants should have been given the time and opportunity to find alternative jobs," Amin said by telephone.

"Sobyanin ordered the removal of kiosks from traffic areas where they should not have been located in the first place," Yevgeny Fyodorov, chairman of the State Duma's Economic Policy Committee, said by telephone.

The crackdown is City Hall's latest attempt to get rid of kiosks over the past decade. In September 2009, Oleg Mitvol, then-prefect for the Northern Administrative District, tried to close kiosks selling tobacco and alcohol but was blocked by Sobyanin's predecessor, Yury Luzhkov.

"I was told that kiosks give jobs to Muscovites," Mitvol said in telephone interview last week. But he expressed doubt that ordinary Muscovites were a major part of "this shady business." "Kiosk trade has a very strong component of corruption," said Mitvol, who was fired by then-acting Mayor Vladimir Resin last month.

The closures are among the hottest topics on the Russian Internet, with some bloggers praising it as a move that will improve sanitary conditions and fire safety, but many others complaining that it will become difficult to grab something to eat or drink in central Moscow.

"The demolition of kiosks is the first step," Public Chamber member and art entrepreneur Marat Guelman wrote in an article published on United Russia's web site. "The second one should be sensible. It should include the opportunity for people to get what they want on their way home."