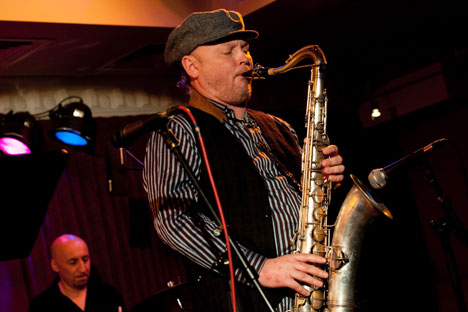 Oleg Kireyev has come a long way from soaking up the Warsaw jazz scene or playing at hole-in-the-walls in the middle of England. One of Russia’s premier jazz saxophonists, a maestro of cool jazz, he has two new releases on CD, “Rhyme & Reason” and “Sky Music.” He is also the artistic director of the popular Composers Union Club in the heart of Moscow. The club in the basement of the Composers Union building has allowed him to play jazz impresario, bringing together American, European and Russian musicians a stone’s throw from Red Square.

“Russian jazz is closer to classical music, just like European jazz. American jazz focuses more on rhythm. I try to synthesize the two,” Kireyev said in an interview with Russia Now.

While he is far from a household name, the inspired diversity of his music and his fervor to bring musicians together may well mean a certain staying power for him on the contemporary scene.

Kireyev brought his “Mandala” jazz fusion project to the South By Southwest Festival - the Austin, Texas, music marathon where careers are made —in 2007. He had been known more for his Herbie Hancock style, and Mandala revealed his talents in world music, jazz fusion and funk.

“Rhyme & Reason” was recorded in 2009 on the heels of a U.S. tour with American pianist Keith Javors and bassist Boris Kozlov (from The Charles Mingus Quartet). They recorded in Tony Bennet’s New Jersey studio; one critic called Kireyev’s breathy tenor on the ballad “What is Love,” “beguiling.”

Kireyev was born in the city of Ufa, the Russian republic of Bashkiria, in 1963. As a child, he showed a keen interest in the local folk music sound. Classical music bored him after a time, but studying jazz was not an option in the Soviet Union. “My music teacher suggested I try the saxophone instead of the piano,” Kireyev recalled. “I asked, ‘What’s that?’ and he replied that it was a ‘weird crooked pipe.’ So my jazz career got started.”

In his music, Kireyev never forgot his ethnic roots: One of his first bands, Orlan, used Bashkir folk songs as inspiration. He was recently appointed cultural advisor to the president of his native Bashkiria.

Kireyev spent three years living in Poland and established himself as a skillful saxophonist; later he moved to England, and his name became familiar in the local jazz scenes.

He came back to ethnic music when forming Feng Shui Jazz Theater, a project that combined traditional swing, Bashkir guttural singing, Moldavan tunes, African rhythms and improvisational jazz. Feng Shui debuted in the United States in 2008 with a tour and the recording of “Mandala.” The album was nominated for a Grammy as the Best Contemporary Jazz Album the same year.

There are a modest number of authentic jazz clubs in Moscow, and Kireyev’s is one of a few offering well-known jazz musicians on a weekly basis. He brings in musicians from Nizhni Novgorod as well as Paris and New York.

The club also provides space for improvisation and promising bands, including a series called Jazz Laboratory. In cooperation with the biggest jazz festival in Moscow, “Jazz at Hermitage Gardens,” the club hosts after hours jam sessions - a chance for Russian jazz musicians to play on stage with their well-known foreign colleagues.

American jazz pianist Mulgrew Miller described the Union Composers Jazz Club as a “wonderful place...[that] definitely has the spirit and soul of jazz.”

“One chooses whether to pursue money or acceptance,” Kireyev said. “The ability to keep the balance works with our club, too. Our evening shows provide space for commercial-free projects. When we invite well-known jazz musicians for gigs, it is sort of commerce for the club because we expect people to come for a good time. But we also have a wonderful program for those creative musicians who have something new. I can say that commerce started to support creativity at last.”