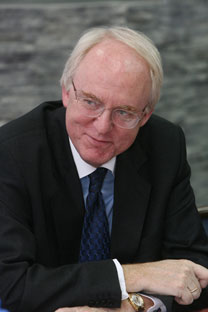 John Beyrle, the U.S. Ambassador to Russia, talked to NG correspondent Andrei Terekhov about the state of bilateral trade and economic ties between Russia and the United States, and the outlook for the relationship. According to the diplomat, the results of the recent midterm elections in America are unlikely to affect U.S.-Russia relations, as both countries have come to firmly believe in the usefulness of productive cooperation. The ambassador pointed out that foreign policy issues were all but absent from the election campaign.

Beyrle believes that the Jackson-Vanik amendment needs to be repealed in concert with Russia’s entry to the WTO, which could happen next year. At the same time, he noted that American investors in Russia are facing difficulties that need to be removed for the sake of productive business ties between the two nations. For its part, the U.S. plans to introduce an expedited visa process for Russian investors to facilitate visits to the United States

Nezavisimaya Gazeta: Mr. Ambassador, some American observers believe the results of the recent midterm elections could turn the clock back on the Russia-U.S. reset. What can you say on this subject?

John Beyrle: The improvement in our relations with Russia that has been going on for two years now is hard to turn back. Americans and Russians are realizing on many different levels the advantages of more productive and constructive cooperation. Not only have we been able to find common ground on a number of issues we had been divided over in the past, but we have also managed to translate this mutual understanding into joint action. It has eventually benefited both our nations, and frankly, contributed to global stability.

It’s normal electoral practice in the U.S. for the party that controls the White House to lose some seats in Congress in midterm elections during the first presidential term. That was the case with most such elections over the past 70 years, with Presidents Kennedy, Reagan, and Clinton also suffering losses at this point.

So there’s nothing special in the fact that President Obama will have to govern with a deadlocked Congress where the Democrats still have control of the Senate, but the House has switched to the Republicans.

What’s interesting is that this time around, the Senate, House, and gubernatorial races focused exclusively on domestic economic issues. Little if anything was said about foreign policy, Washington’s Russian policy or even wars, such as the one in Afghanistan. For this reason, I believe a major shift in US policy towards Russia is unlikely. We want to continue along a constructive and productive line.

N.G.: Is it feasible for Russia to join the WTO within the next 12 months? Larry Summers, Director of the White House National Economic Council, has recently spoken positively on the topic.

J.B.: Russia’s accession to the WTO is an important priority for the Obama administration. President Obama clearly stated as much at a meeting with President Medvedev in Washington, DC last summer. A recent visit to Moscow by Larry Summers was part of the U.S. effort to achieve maximum progress on this matter and demonstrate support for Russia’s WTO aspirations. We were extremely satisfied with the attention Larry Summers enjoyed in Moscow, as well as with the very substantial steps taken by the Russian government over the past six to eight months in order to join the WTO. We have made more progress over the past three or four months than we have over the past two or three years, mainly thanks to a very strong Russian team headed by First Deputy Prime Minister Igor Shuvalov and Russian trade representative Maxim Medvedkov.

Russia now has to complete bilateral negotiations with the EU and other WTO members. As far as the U.S. is concerned, most WTO related bilateral issues have been resolved. Russia will also have to complete multilateral negotiations with regional groups, in particular on agriculture. In addition, work needs to be done on unfinished sections of the Task Force report that is being discussed in Geneva. But we are seriously optimistic, as Russia is on the right track to join the WTO next year.

N.G.: With this in mind, what can you say about the chances for a repeal of the Jackson-Vanik amendment?

J.B.: Simultaneously with Russia’s WTO entry, we are trying to have permanent normal trade relations [most favored nation status] extended to the country, which requires that the Jackson-Vanik amendment be repealed. The Obama administration has a strategy for achieving this goal, and we are now discussing it with Congress. We acknowledge that the amendment was adopted at a time that was quite different from today. The key reason for passing this restrictive foreign trade measure in the 1970s was related to obstacles to Jewish emigration from the Soviet Union. This problem has been solved long ago, but because the Jackson-Vanik amendment has always been related to trade with Russia, many members of Congress still view it through the prism of U.S.-Russia trade relations. We will work with Congress next year to repeal the amendment. In the meantime, it’s very important for the U.S. and Russia to do their best to reduce or eliminate any friction in our trade relations. We want to achieve this and hope Russia wants the same.

N.G.: What has been the impact of the financial and economic crisis on our relations?

J.B.: The crisis has affected trade relations across the world. It has had an impact on our trade with our largest partner, Canada, so it’s not surprising that it has influenced the U.S.-Russia trade balance as well. Our trade reached $36 billion in 2008, the highest point since the end of the Cold War. After the crisis struck in 2009, that number fell to $24 billion. In 2010, trade between our two countries is projected to expand by 30 percent over the previous year and reach $30 billion. At this rate, and with the renewed interest expressed by U.S. investors in Russia over the past eight or nine months, I would say we should break the 2008 record in 2011–2012.

N.G.: What sectors of the Russian economy are most interesting to American investors?

J.B.: Crisis or no crisis, U.S. investments in Russia have remained more or less stable. Direct US investment in Russia totaled some $21 billion in 2009, with most of it concentrated in energy, consumer goods, hi-tech, and food and beverage. Plans for large investments in Skolkovo have been announced. Cisco Systems has pledged to put $100 million annually into this project over the next 10 years. Microsoft has made a similar commitment, and recently I visited Kaluga, where General Electric opened a new Energy Technology Center. GE is known for choosing where and how they invest very carefully, so the opening of this factory must be seen as a very important vote of confidence in the Russian economy from a major American corporation.

N.G.: What difficulties do U.S. companies face in Russia?

J.B.: The difficulties are still significant. I would say the legal structure is problem number one. While there are laws to resolve commercial disputes between companies, their application is not always predictable. Many administrative barriers remain in place. Unlike in Russia, in the U.S. it is possible to start a small business by filling out some forms online in five minutes. Entering the Russian market may take many months, especially for American companies that are new to Russia. Property rights, particularly intellectual property, are still enforced inadequately, although the situation has been definitely improving. Finally, the taxation regime: I keep hearing from US and Russian oil and gas companies that taxation of oil and gas production in Russia is the key obstacle to development of new deposits or full-scale operation of existing fields. And of course, corruption must be mentioned. We see how Russian officials are increasingly admitting that corruption has reached a point where more effective measures are needed to fight it than in the past. Corruption is now a topic of Russian political debate that is taking place in a sensible manner. We hope for it to lead to the systemic changes that Russia needs. According to the latest estimates by Transparency International, Russia has not yet made progress in fighting corruption as perceived by investors, and is losing a lot of money because of that.

N.G.: Does the U.S. cooperate with Russia on fighting corruption?

J.B.: We are working on this matter as part of a bilateral presidential commission. The commission includes a business development task force, which has drawn up a list of areas, such as corruption, administrative issues, and property rights, where both nations need to act to improve the investment climate. For example, the U.S. visa regime sometimes acts as a deterrent to Russian investors. We are working together with the American Chamber of Commerce in Moscow so that its Russian members can benefit from an expedited process for issuance of longer-term U.S. visas.

N.G.: What aspects of the Skolkovo project do Americans find the most interesting?

J.B.: American companies are always intrigued when they see that a country such as Russia, with its tremendous scientific knowledge in mathematics, is trying to build on its knowledge to give a strong momentum to innovative development in the economy. It’s no surprise then that Cisco Systems, Microsoft, Boeing, or General Electric are seriously considering investing in Skolkovo and are trying to figure out what this project will lead to. There is an understanding in Russia that Skolkovo is bigger than just buildings, jobs, or manufacturing orders. It is necessary to build a whole ecosystem of flourishing entrepreneurship. Which once again means better legal transparency and predictability in the application of law.